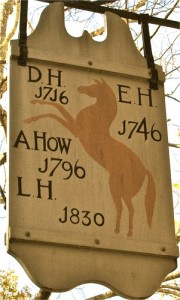 As I amass data and legends and documents about these Howes, I start to think of them as having specific personalities, even though there is no direct historic information.

For instance, although his son Ezekiel was a born politician–outgoing and energetic, and his father Samuel a wheeler-dealer (the Donald Trump of colonial Sudbury),  I picture David as a serious, religious man who prefers to have an orderly life. [UPDATE: When I wrote this, the world did not know Donald Trump in the same way they do since his run for the Republican nomination for President.  I regret comparing Samuel to Donald. While Samuel had activities–development, building, money-making, political–in common, he certainly did not share a similar value system.] He would probably have been strict with his children and conducted his life with one eye on the afterlife, being industrious, charitable and faithful.

Though I am perfectly aware that it is unscientific, and against the principles of any serious historian, I just can’t help guessing.

In talking about David, I am continuing my journey back through history. Once I get to David’s grandfather John Howe, we will have all of the Howe family from the first to arrive in America to my 5 x great-grand uncle Ezekiel and his brother my 5 x great- grandfather Israel. And they will be in order, so you can see the development of the tavern-keeping Howe family for 200 years from the very early 17th century until nearly the end of the 18th century.

David was the sixth child of Samuel and Martha (Bent) How. He had one younger sister and gained six half-siblings when Samuel married his second wife, Sarah Clapp. For David, a large family seemed the norm.

When he married Hepzibah Death in December 1700, he took his vows seriously and planned to have a large family.  His father deeded 130 acres on the west side of Sudbury over to David–a handsome piece with plenty of room for a house, fields, and a mill.

With the help of his father, David built the house that became a tavern and today stands as part of Longfellow’s Wayside Inn.  Although there was a strong family tradition of tavern keeping, he did not rush into the tavern business. His father, Samuel, was a tavern keeper, the older Howe tavern was a few miles east of the land David was given. And David’s grandfather, John had kept a tavern in Marlborough as had a couple of other relatives. 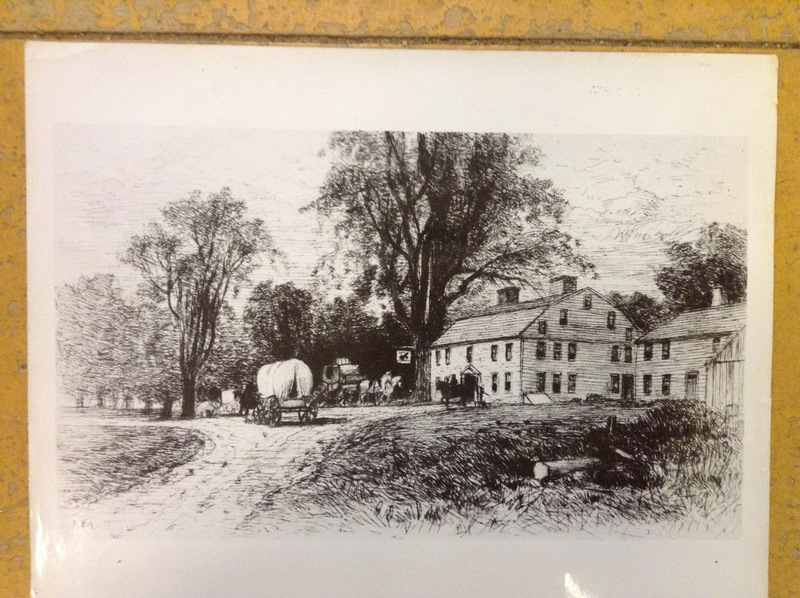 Old etching of Red Horse Tavern/ Wayside Inn, used with permission of Longfellow’s Wayside Inn archives. It is speculated that the original house occupied the area that is the front door and the two windows to the right in this picture, and in the present inn.

When he first got the land, David had his hands full clearing land for his new house, and then for fields and pasture.  He also needed to think about the use of the fast-running creek that ran through his property.

Meanwhile, Massachusetts was being plagued by battles of the French and Indian War, which dragged on from 1689 to 1763. Their was a brief peace in 1713, and perhaps that encouraged David to think about what peace would mean regarding traffic along the Boston Post Road, and how convenient a location his land would be for a tavern.

Since 1707, citizens in this western part of Sudbury had been interested in establishing a new meeting house that would be more convenient to them than the present one on the east side of Sudbury across the Sudbury River. This was important because the people were required by law to attend religious services on Sunday and listen to a sermon by a minister paid by the town.

Not only that, but generally a tavern was located near the meeting house. Worshipers needed a place to relax, get something to eat and drink after their travel from home and, in the winter, warm up from the usually unheated meeting houses. So if the permission was given for a new meeting house, a tavern would be a necessity. David’s signature joined others on the petitions. However the west side meeting house was not authorized until 1722.

At any rate, he applied for and received a license to “keep a hous of entertainment.” He set to work, probably with his father Samuel’s help (Samuel was a carpenter) and built an extension on his home. [UPDATE: Due to the comment of an astute reader –below– I need to correct this assertion that Samuel might have helped.  The license was granted in 1714 and Samuel died in 1713, so he could not have helped with remodeling in 1714. Although there are some tales that David’s house served as a resting place for travelers before it received a license, that tale has been discounted by historians.] The family would live in this new section, while travelers would eat and drink on the main floor–what is now the front Parlor–and sleep on the floor above, that is still a bedroom in Longfellow’s Wayside Inn. 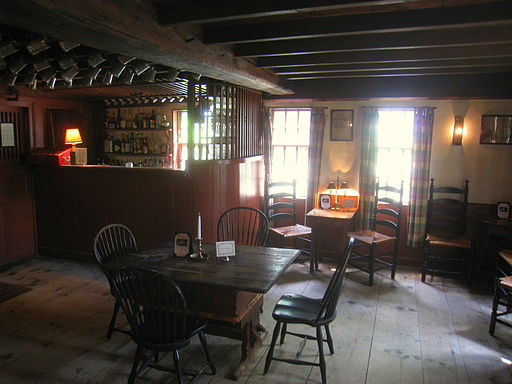 Longfellow’s Wayside Inn Bar in Sudbury MA. The beam across the ceiling may be original from David and Hepzibah’s orginal home, circa 1702. Photo in public domain from Wikimedia.

By 1720, Hepzibah had presented her husband with four sons and three daughters, including my 5x great grandfather Israel and the youngest  Ezekiel (1720). [For more on the children, you can read my article on Hepzibah, David’s wife.]

The brief peace between the English and the French did not last, and in 1724 there was an Indian raid on a farm near Sudbury and Rutland.  The following year, 1725, David’s brother Daniel, a member of the militia, marched off to fight, but was sent home because he was lame.

Around 1727, David, now both a farmer and a tavern keeper, added one more title–miller.  He built a mill on the stream that ran through his property.  The picturesque mill that shows up in illustrations of the present inn was imported by the Ford Foundation. It is not the original David How mill.

As if fighting the Indians did not keep them busy enough, townspeople were battling each other as well.  All the small towns of Massachusetts seem to be in constant turmoil during the 17th and early 18th centuries about town boundaries–spawning the familiar New England clusters–TownName Central, North TownName, South TownName, East TownName, etc.

According to A History of Longfellow’s Wayside Inn,

By 1740,  David had led another petition to the court for a new town to be carved out in the How Tavern area. This was never approved.

Perhaps as a consolation prize, in 1741 David How was elected as a Selectman of Sudbury.  This was a period when selectmen were charged with regulating taverns and more and more tavern keepers were seeking election so that they could keep the regulations from becoming onerous. However, since David was 67 years old, I cannot believe that he was lusting after political power.  I believe the election was more of a show of respect for an honored elder of the community.

Two years later–1743–David’s youngest son, Ezekiel married Bathsheba Stone and they moved in to How’s Tavern.  This triggered another enlargement of the building.  But in 1744, David decided to formally turn over the building, land and business to Ezekiel, although David’s name is on the license through 1747. David How Jr. took over operation of the mill.

David lived a long life, dying at the age of 85 (1759) and no doubt continued to advise Ezekiel, and perhaps step in when his son was off on military duty.  As I mentioned in the article on Hepzibah, she continued to live with her son and daughter in law until her death ten years after David.

David’s life record reflects a concentration on the fundamentals. He was not a man to be distracted by military service or tempted to move to a new community.  He lived in Sudbury all his life and working at plain non-showy work–whether that meant clearing land, farming, milling or running a tavern.

I believe the Biblical names of his children reflect his deep religiosity.  For example, instead of naming his first born son after himself, he named him for a son of the Biblical King David–Eliphalet.  That and his lack of leadership roles in the community lead me to believe that David was modest and humble. Altogether, a fine Puritan son.