It would be great to be able to tell some new stories about Dorcas Middaugh Brink, my great-great grandmother. However, I already told you the major stories of that family when I wrote about Abraham Brink (1828).

That’s the story of women in history isn’t it?  I didn’t know whether to laugh or cry when I saw a major newspaper’s coverage of the historic event that took place in Philadelphia yesterday.  The headline read “With Nomination, Clinton Makes History“. Under the headline they published a huge photo of former President Bill Clinton.  So the historic even was the nomination of a former president?  Nah, it was that other Clinton–the WOMAN. Oh, yeah, women make history, too.

Sorry Dorcas. My bad, as they say in the 21st century.  I should have told the story of the birth of twelve children and the loss of six children, the growth of an Ohio farm and the perspective of my great-grandmother’s family from your viewpoint instead of from that of your husband, Abraham. But things being what they are, I have more information on him.  So here’s what I know about you grandma.

Dorcas Middaugh was born to Jedidiah Middaugh and Ann Coddington Middaugh in Danby Township, Tompkins County, New York on May 2, 1826. Danby was and is a small town south of Ithaca New York, not far north of the Pennsylvania border.  Her father had been born in New Jersey, but her parents settled in New York when they married.  Dorcas had an older brother, and as she was growing up, at least two more brothers were added to the family. Sometime after 1840, the family moved to Holmes County, Ohio, where she met and married Abraham Brink.

Her mother and father-in-law, as well as her father and mother lived nearby when she was a young bride, and as her children grew up, they also stayed nearby.

At this point to fill in Dorcas’ life for the next 47 years, which included the birth of twelve children, marriages of the oldest and the birth of grandchildren–please read Abraham Brink Takes Root in Ohio.

When Abraham died in 1898, Dorcas went to live with her daughter Mary V. Brink, the widow of Joseph Anderson in a nearby township in Holmes County, Ohio. My grandfather Guy Anderson and his bride Lillis shared the house with his mother, Mary. Since I knew my grandfather Guy (whose 2nd wife was my grandmother) and he lived for a couple of years in the same house with HIS grandmother, Dorcas, I feel a connection to Dorcas Middaugh Brink.

In 1900, when the census report was filed, Dorcas reported that she was a widow, had 12 children, but only six were living. When you read Abraham Brink’s story, you will see that she lost three of her children in a very short period of time.

Lillis and Guy had a daughter in 1901 (My aunt Rhema Anderson Fair) and a son in 1903.  Lillis died, probably of complications from childbirth in 1903.

In March of 1904, Dorcas died and was buried in Wolf Creek Cemetery in Holmes County. 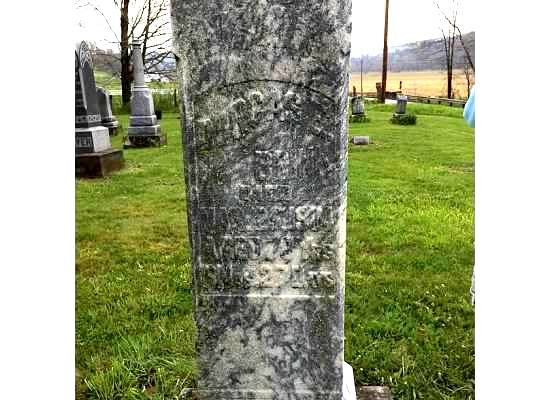 P.S. In October of 1904, my grandfather married his second wife, my grandmother, Vera May Stout.