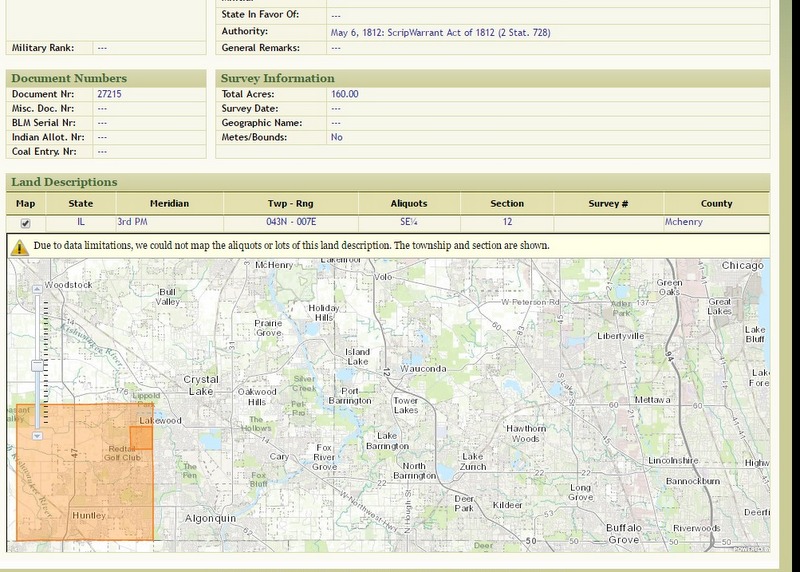 Last week I wrote about 2 x great grandfather’s  Jesse Morgan’s 1847 purchase and sale of land to James Woods in Illinois. Thanks to the Illinois Archives and the Bureau of Land Management website for public land purchases, I could learn details of that purchase. As I said last week:

See last week’s post for the background, including the deed of sale when Jesse sold the land and a map of the land’s location.

Who is James Woods?

He sold the land to a man named James Woods, which made me curious. Who was this James Woods, also referred to as “Doc” Woods that Jesse mentioned at least three times in letters to his wife Mary as well as serving as Woods’ land agent?

[Warning:  Since I am patching together whole lives from scraps of information, the inferences I draw may be wildly off the mark. I am merely sharing one possible version of the story of Jesse Morgan and Dr. and Mrs. James Woods. Feel free to offer counter-possibilities.]

Since I had so little information–his name, probable occupation and the fact that he must have lived somewhere near Jesse and Mary in Holmes County–a search for James Woods on Ancestry was difficult. I resorted to searching line by line through census reports of the Killbuck village and township in Holmes County and found several Woods. Most of them were farmers, but I finally lit on a physician.

In 1850, the Woods family lived six houses away from Mary Morgan.  In 1840 they had lived in another county, but apparently moved  to Killbuck early in the decade, since Jesse mentioned them in an 1843 letter. Also, James B. Woods was Killbuck postmaster in October 1844, which could have been what motivated the move to Killbuck, and would have guaranteed he was well known in the community.

By 1860 Mary Morgan and her schoolteacher daughter lived with a family next door to the Woods family.

Following the lead on that census, I discovered that one of James Woods’ descendants had a public tree on Ancestry.com. While I do not generally rush to use information from family trees, this one was obviously well researched and sourced.

When I contacted the descendant, it turned out that he had a wealth of information, some of which shed light on Jesse Morgan and his letters.

The Litigious and Influential Mrs. Woods

I sent the Woods descendant copies of Jesse’s letters and asked what he thought Jesse was hiding  in his 1843 letter  when he warned Mary not to tell everything to Mrs. Woods. He replied that Mrs. Woods had a reputation for being litigious. He added that she was well connected and well regarded, so her opinion would definitely count for something.  So Jesse may not have been hiding anything in particular, but just being cautious around this woman of influence.

Sarah Cowan Woods, I learned, had several relatives who were lawyers and a cousin, who although he was a farmer, liked to play lawyer in the Holmes County court in Millersburg. Although Jesse was worrying about Mrs. Woods in  1843, her true colors showed long after Jesse was gone, when she went to court in 1871.

It seems that “Doc” James Woods drank a bit too much. (I know, I know. If this were a novel, the drunk small town physician would be a cliché.)  Besides her understandable frustration at having a husband who drank, Mrs. Woods was no doubt influenced by the Temperance movement, very powerful in the late 19th century. She may have also been emotionally unstable due to the death of a child between 1860 and 1870.

Whatever set her off, she decided to get revenge–and possibly make a few bucks–by suing everyone who ever served or sold liquor to her husband. She was represented by a most distinguished member of her family who was a Princeton graduate, a lawyer of high repute, and a future Congressman among other accomplishments. She won $800 of the $3000 she asked for. Still a considerable sum.

In 1870, the Woods were living in Millersburg, but the 1871 trial ended their life together and in 1880 we find J. B. Woods (James Woods) living in a Killbuck boarding house. The census lists Sarah Woods as a widow in Millersburg, where she works as a seamstress. Obviously she is not a widow, but she may wish she were.

This scandalous and well-publicized law suit not only ruined her husband’s reputation, and thus his career and their mutual source of income, but it also ruined their son James, who was just beginning his medical career. He fled town and died two years later.

Another bit of information the descendant shared shed light on a negative side of Jesse’s personality.

The politics that the Woods descendant described to me in an e-mail was a radical wing of the Democratic Party. During the Civil War the group would be called Copperheads–those opposed to Abraham Lincoln and his conciliatory policies toward the South.

James B. Woods was President of a small Democrat political organization in Millersville [Millersburg]. During the Civil War it sponsored speakers like Clement Vallandigham, an Ohio Congressman who supported slavery and the Southern cause. Immediately after the war, Woods’ group called for laws to control blacks, arguing strongly for legal segregation of the races. So, not a nice guy.

I have a letter that a nephew wrote to Jesse mentioning Jesse’s anti-German immigrant stance and the general prejudice against German immigrants. It is easy to believe that the politics of James Woods attracted Jesse. (The Woods’ descendant points out to me that prejudice against the wave of German immigrants in Ohio was widespread at that time, and I agree. See this earlier article. Nevertheless, I believe that a tendency to be nativist would also incline Jesse to be among those who believed Negroes were inferior.)

James Woods (the father) survived twenty years after the lawsuit, dying in 1891. In 1900, Sarah Cowan Woods could  legitimately list “widow” on the census form in Millersburg. 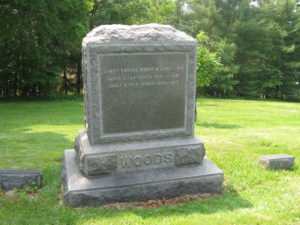 Tombstone of James and Sarah Woods and their son James.

Despite the tumultuous family life, some later family member decided the Woods and their son belong together in the Millersburg Ohio Oak Hill cemetery.

I do not know what happened to the land that James Woods bought from Jesse Morgan.  He never lived in Illinois. I hope he sold the land at a good profit to sustain him after his wife destroyed his career.

We will finish up Jesse Morgan’s story, by talking about his children, starting with Charles Morgan. But first, I’m going to share one of my mother’s recollections, appropriate for Halloween.   Oooooooo.

Research Notes on James B. Woods

(The first section lists the sources cited by the descendant discussed above on his family tree of James Woods. I did verify them on line through Ancestry.com)

(My own research sources)