I have always thought that my grandfather, Clifford Kaser (1867-1930), was the villain in my family story.  Not the classical evil villain, certainly, as he was a righteous, hard-working, religious man. But a villain to family because he was so righteous, so focused on hard work, and so stiff-necked when it came to religion. And since he died before I was born, it was easy to make him out to be a bad guy. He never had a chance to prove otherwise in person. And I had only my father’s stories of grievances against his father to go by. And those, unfortunately stern photographs from back in the day. Even in this picture with the hint of a smile, he looks like a tough cookie. 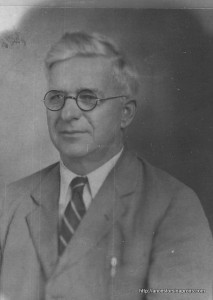 But I’ve been “living with” Cliff Kaser (I don’t think anyone ever called him Clifford) for a few days now, and I have slightly adjusted my opinion. Cliff was born in 1867, the 6th child of Catharine and Joseph Kaser. The family lived in Bloomfield, Ohio, a town that later changed its name to Clark.  (Research note: most geneaological records depend on locating a person in the United States by city or township, county and state. However, the little town of Bloomfield/Clark was/is split right down the middle between Coshocton County and Holmes County. That makes life a little too interesting for the researcher.Family members who lived in the same town, might be in different counties.)

Cliff’s oldest brother, Cornelius, was 13 years older. His brother Edward, born in 1871 was the youngest of the family.The only member of this large number of aunts and uncles that I ever heard my father mention was Emma (also listed in records as Anna), and I will be writing about her shortly.

Most members of the family stayed in or near Clark and their family and farms. That was my first clue that I might be able to relate to Clifford. He didn’t stay put. He changed jobs, he changed locations and he changed religions.

On October 26, 1893 Cliff married Mary Isadore Butts (1869-1926), more commonly called Mamie, in Mt. Vernon, Ohio. According to my father’s records they were married in Mt. Vernon by a Squire Workman. That is significant because Mamie’s family were devout Catholics. One year later, they had their first son, Keith. The whole story surrounding his marriage to Mamie contains one clue as to why I had an unfavorable opinion of Cliff, but that will have to wait for another day. 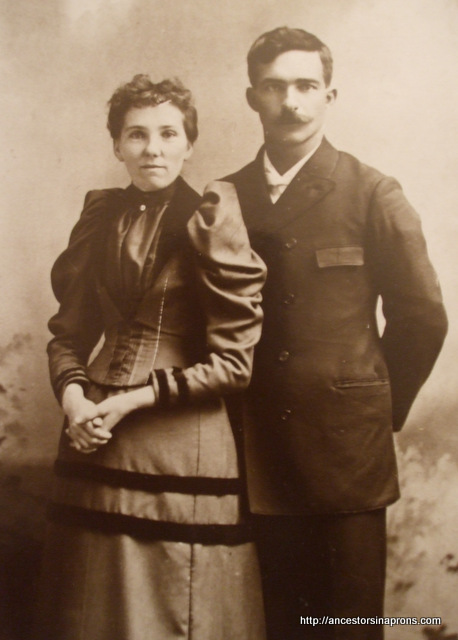 Keith was born in Danville, which was the town Mamie came from.Wherever they lived in those early years, by 1900 they lived in the town of Coshocton, Ohio and Cliff was working as a “tinman,” to support his family, now increased by the birth of Irene and Paul (my father).

In 1910, they were living in Clark Township again, surrounded by Cliff’s family and Cliff was a barber with his own shop. I find it interesting that his older brother owned a tinshop, but Cliff worked as a barber. (From cutting tin to cutting hair–what the heck.). In another coincidence that may not be entirely coincidental, the 1930 census shows Cliff’s future brother-in-law George Sutherland as owning a barbershop in Clark.

Very soon after the 1910 census, Cliff started a tin shop in Killbuck, Ohio. The family was living in Killbuck when Milton was born in 1912.  Judging from Milton’s size in the first picture below, this postcard picture had to be taken in 1913 or 1914. (Note: I can’t help wondering if the same itinerant photographer who took the promotional postcard pictures of my Daddy Guy’s stores also took these of Kaser’s Tin Shop). 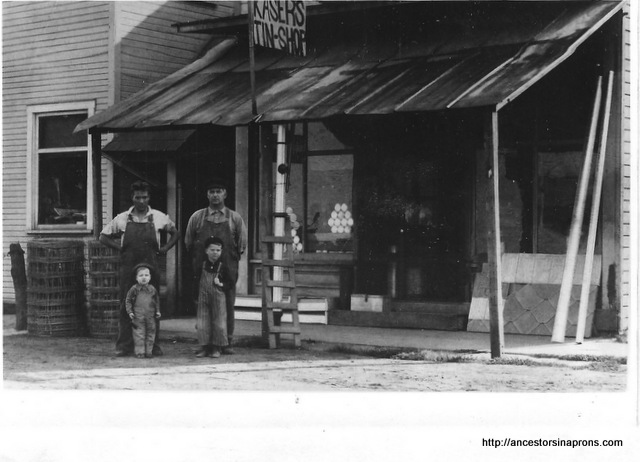 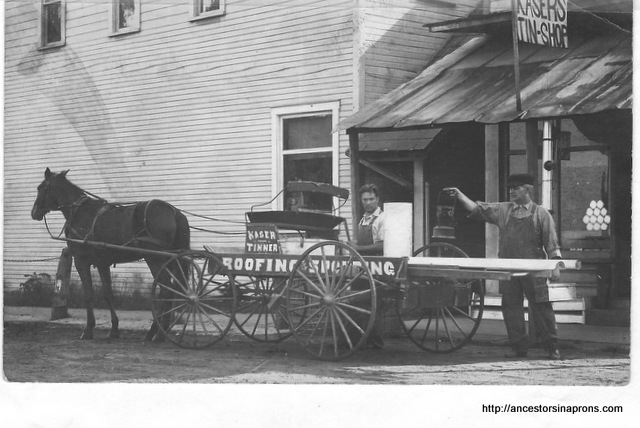 Kaser Tin Shop with Keith and Clifford about 1913

The tin shop did not last long. Cliff had converted to Seven Day Adventism and took his family (whether they wanted to go or not) with him.  The Adventists were an evangelical and fundamentalist church formed in the mid 1800s, and increasing their evangelical efforts post World War I.  The World Headquarters of the Adventist movement was in Takoma Park, Maryland near Washington, D. C. and Cliff moved his family there for a year or two during the teens of the 20th century. My father, who was born in 1909, was old enough to remember the experience quite well. You can see him in the center front row of this picture, squinting one eye. This picture is dated 1914-1915, Takoma Park. 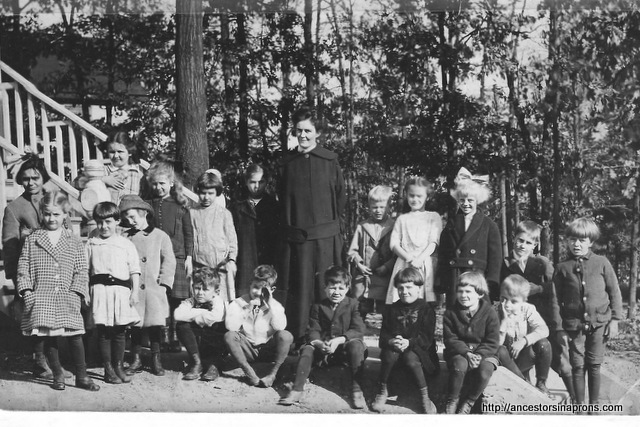 When they returned from Tacoma Park Maryland, they settled in Millersburg, Ohio, and according to the 1920 census,Clifford was working as a “plumber” for the railroad. But he went back to working with tin, this time as an installer and repairer of furnaces. Millersburg is where my father finished high school in 1926, and where the most damning evidence of Cliff the villain arises in the family story.

My father was intellectually curious and longed to go to college. The family agreed, but he must go to a Seven Day Adventist School and study to become a minister.  At 17, he took a train to D.C. and started studying Greek and the Bible, but just a month after he started his exciting studies, he got a telegram from his father. His mother had died in October, 1926.

My father never got over his outrage that his father had not contacted him to tell him his beloved mother was ill. To make matters worse, Cliff announced that Paul could not return to school, but must stay to help with the furnace business. The two older children had married and left home. Only Milton, 15, and still in school, remained at home.

This picture was the last time the whole family would be together for a portrait. Mamie, who looks much older, is 56 and Clifford is 59. 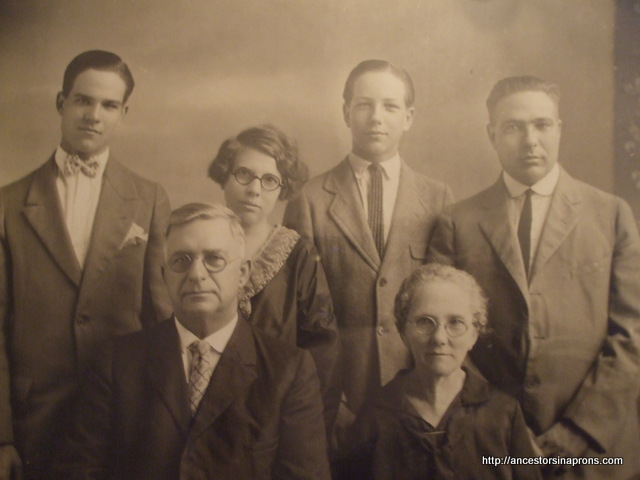 Then, tragically, five months and one week after their mother died, the youngest Kaser boy, Milton, came down with a lung disorder and died in my father’s arms in April 1927. My father, grieving for the two people he felt closest to in the world, and having to work at a job he hated, got one more blow. His father married another woman and boarded a train for Florida. He (and also I when I heard the story) couldn’t help but feel that Cliff got what he deserved when his new wife, promptly deserted him once they got to Florida. Apparently she was just looking for a ticket out of Millersburg.

Cliff returned to Millersburg and continued to conduct his business, but in June, 1930, he went into the hospital for minor surgery and died of complications. My father, at 19, had lost his mother, his younger brother and his father and his chance for higher education.  He blamed it all on Clifford. How Paul Kaser survived on his own through the tough economy of the 30’s is yet another story for future episodes, but now we are talking about Clifford.

While the rest of the Kaser family stayed in the small town of Clark all their lives, Clifford moved away. While others stayed close to the farm and farming-related occupations, he tried different occupations. He apparently was good with his hands–a good craftsman. He had an entrepreneurial spirit, starting businesses of his own. While many members of his family could never write anything more important than “farm day laborer” on the census report, he wrote “Own”, under employer.  He was adventurous enough to move clear across the country at one point.

Whatever I might think about his strictness, I have to admire the fact that he lived by his own beliefs.   Ever job he did must be done well. And he followed his religion strictly. My father remembered that he went to extremes to avoid working on the Sabbath.

The main message Clifford Kaser passed on to my father was that the aim of life is to leave the world a little better than you found it. He did nothing huge in this world, but he supported his family without being dependent on others. And he fathered fine children. His gravestone mentions perhaps the best thing in his life. It reads, “Cliff Kaser, Husband of Mamie.”