If you are a family history researcher or blogger, you will understand why I have been reluctant to tackle this particular family line. SMITH. But the Smiths are not going to get any easier to figure out if I keep ignoring them.  So here is my great-grandmother, my father’s grandmother, Ann Marie Smith (Butts). 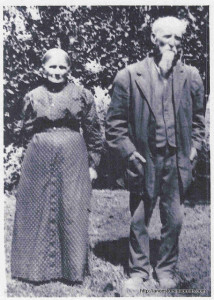 Ann Marie Smith, my father’s grandmother, joined five other children when she was born in Knox County,Ohio on the 12th of April, 1835. The children ranged from three years old to ten. Isaac, their father, the shoemaker, must have mended a lot of shoes to be able to feed his large family.

Her parents, devoted Catholics originally from Maryland, took her to the mission that would become St. Luke Catholic church in Danville Ohio to be christened the following July. 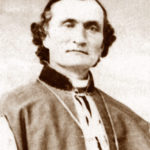 Jean Baptiste Lamy, taken in 1860. From the French Wikipedia site.

HISTORICAL NOTE:  Four years after Ann Marie Smith’s  baptism, a traveling priest began serving the Danville area.  Jean-Baptiste Lamy would be Annie’s priest when she was a young child. He built the first wooden church to serve St. Luke Church in 1840, before he departed for New Mexico in 1850. This means Father Lamy would have presided over the baptism, christening and infant deaths of the Smith children that came after Annie. I also found a marriage license of Annie’s older sister, Mary Jane, SIGNED BY Rev. Lamy!!

For the rest of her life, Annie would know only Knox County, Ohio as her home, and St. Luke as her church.  The beautiful brick church, with its soaring interior, still serves the area.

While every child certainly was welcomed with love, little Ann Marie must have been a special delight because Mary (Krigbaum) and Isaac Smith had suffered the loss of an infant girl in 1833.

I wrote a bit about Ann Marie’s married life when we read her husband, Henry Allen Butts’ letters home from the Civil War, but I recently realized that I had not looked at Ann Marie’s earlier life at that time.

During the early years of her life, the Smith family kept growing. But before she gained more siblings, three-year-old Ann lost a 7-year-old brother (George). In the same year, her mother Mary Smith gave birth to another girl who died in infancy, Priscilla Bell Smith.

Then the curse–if they believed in such things–was lifted and five-year-old Annie gained a close playmate when Isadore Orilla  joined the family in 1840. I believe Mary felt particularly close to Isadore, because Annie honored her sister by using her name for my grandmother. Mary Isadore Butts (Kaser) received the names of her grandmother Mary and her aunt Isadore.

With a new baby , and a total of eight offspring in the house, Mary Smith no doubt had mixed feelings about her oldest daughter, Mary Jane’s marriage and departure. The oldest son, John Henry also married in 1845. Mary Jane had reached 20 and John (also called Ivan) would now be 22.

In 1847, when Ann Marie reached twelve her mother gave birth to another girl baby who died in infancy.  Poor Mary. She had lost three children in infancy and one at only seven years old. Another shock hit the family when Ann Marie reached fourteen years old.  Ann Marie’s older brother Jeremiah died in a farm accident when he was only twenty-two. Of twelve children Mary Smith had given birth to, only seven survived to 1850.

[In 1849 William Smith, 21, may also have married and lived in another county with an uncle named George, but I need further research on this since there are dozens of  William Smiths to sort out.]

When the census taker wrote down the facts in 1850, he showed 15-year-old Ann Marie as the oldest of the children still at home. The others were sister Isadore (10) and brothers James (8) and Joseph (6). Although their mother Mary apparently could not read and write (at least in English), the Smith children all attended school and became literate. In 1860, Ann Marie still lived at home at 25 years of age–probably already considered a spinster. (The census shows her as 24.)

The Spinster Meets Her Man

In 1860, Henry Allen Butts showed up in the Pennsylvania census living in a boarding house.  How he met his wife Ann Marie Smith remains a mystery to me. Political division stalked the land, and most expected war to break out. Henry, who presumably had not yet met Annie, joined a Pennsylvania Regiment of the Union Army for a year.  When he mustered out, he apparently moved to Ohio. His father had died in 1846, and I am not sure where his mother was by 1860.

Records show that Ann Marie Smith and Henry Allen Butts married August 23, 1864.  They obviously had met nearly a year before that, as their first son, Giles Allen (called Alan or Allen), came “prematurely” a month after the marriage.

The war continued to rage in 1864. Henry did not own land, and did not have a skill to rely on, so he joined the Union Army in Ohio. Since Henry had already served a one-year stint with the Union Army from Pennsylvania,  I can think of no reason other than financial that he would leave his “Dear Wif” and the baby he obviously doted on. His love for both of them shines through his letters, regardless of grammatical and spelling challenges.

If Ann Marie felt frightened and alone when her husband left for the front, things only got more troublesome when her brother John also joined the war.

The oldest boy in the Smith family John Henry Smith, enlisted at the beginning of 1864, even though he was already forty years old and married with children.  Henry Allen Butts mentions John Henry in a letter to his wife “Annie”. Annie had told Henry in a letter from home that her brother had gotten a leave and visited with his children.  The visit, in retrospect, suggests a bittersweet memory.  John Henry fought through several severe battles with his unit and died of wounds he received near Nashville Tennessee before 1864 ended.

It is easy to see Mary’s problems during 1864 with her husband gone and money in short supply. She is offered a job helping out as a housemaid, but Henry doesn’t approve of that, so she struggles along, without borrowing and without working outside the house.

Although Henry fought under Sherman in the famous March to the Sea, he survived to return to Ohio and invest in a small farm. More fortunate with babies than her mother, Ann Maria Smith gave birth six times and all six lived to adulthood, although one daughter died at 26.  Ann’s father died in 1886 and her mother died in 1892.

I encourage you to read the story of the rest of Ann’s life which I covered in this post about Henry’s first letter home.  Rooted in Knox County, near the small town of Danville, Ann Marie lived until April 1917 when she was 82 years old.  My father would have been eleven years old when she died, and remembered both Ann Marie and Henry Butts.

A memoir written by Homer Blubaugh tells more about Ann Marie, so devoted to her church that she would walk a few miles to church carrying her youngest baby, known for her enormous vegetable and flower garden.

Ann Marie Smith lies buried in the Catholic churchyard in Danville, Ohio. (I believe her grave is unmarked. Her husband’s grave was unmarked until a veterans’ organization erected a Civil War Veteran monument.) St. Luke church shepherded her into the world with a christening, brought her solace throughout her life and saw her departure. Henry survived her and died in 1920.