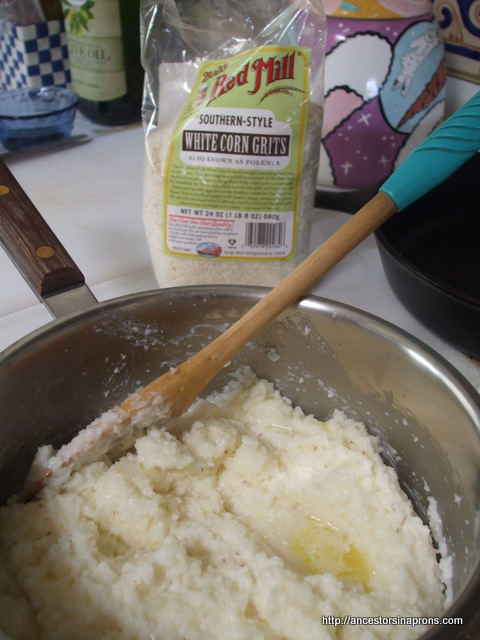 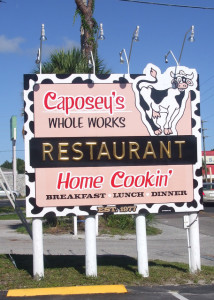 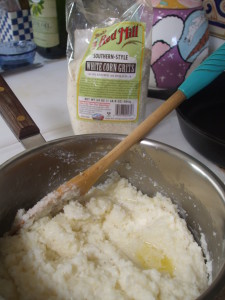 My Aunt Irene, older sister to my father, Paul Kaser, worked hard but faced numerous roadblocks in her life with a sense of humor. I knew Irene, as a kind woman, the ideal housekeeper–cook–gardener–and quilter. She had the Kaser bent for story telling and word play. But I got to know her better through a Personals column. No, not THAT kind! Small town papers reported in the personal column, who was traveling, giving dinner parties, serving on committees–all the details of personal life.

Irene was the second child born to Clifford Kaser and his wife Mary Isadore (Mame) while they were living in Clark, Coshocton County, Ohio. 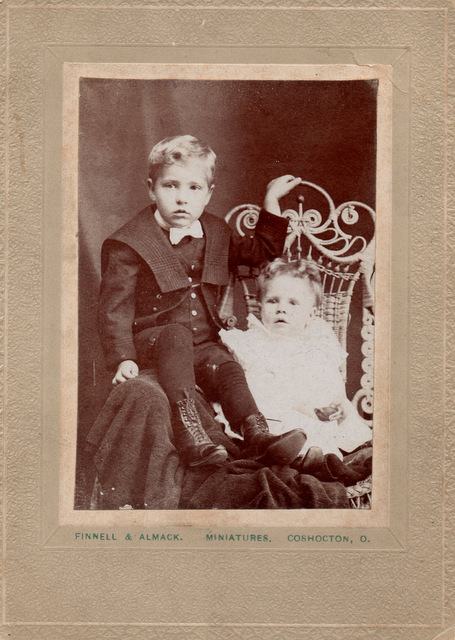 From the time of her birth, Irene could not hear well. Because of her hearing impairment, her speech was affected. Although she could speak, the words lacked the sharp sounds that she had never heard. 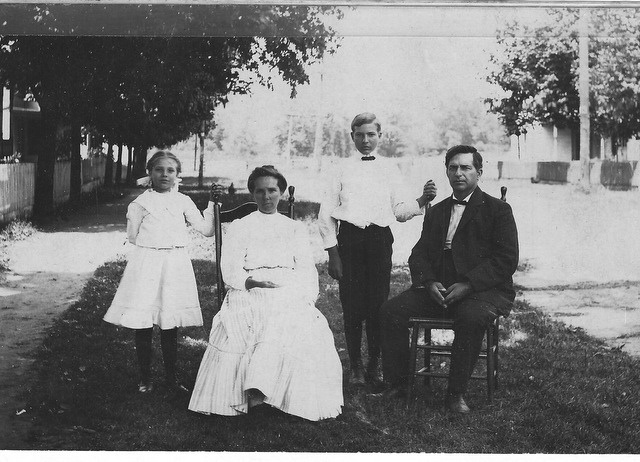 The Kasers lived in Clark until Irene was about 13, when they moved into Killbuck for two years. Then they moved on to Takoma Park, Maryland, (just outside Washington D.C.) to  be near the headquarters of the Seventh Day Adventist Church.

Although they returned to live in Millersburg, Ohio by 1920, they spent summers at the Seventh Day Adventists Camp at Takoma in the summer. Irene had dropped out of high school after her junior year, about the time they first moved to Takoma Park.

We know that they were there sometime during 1921, when Ohioan Warren G. Harding was President, because his wife hired Irene’s mother Mame and Irene to do sewing for her. (See my story  here.) 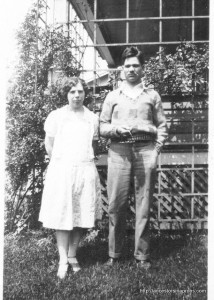 In 1920, at the age of 22, Irene was still living at home with her parents and was not employed.  In October 1926, Irene’s mother, Mary Isadore (Mame) Kaser suddenly died. (My father had gone to Washington D.C. to go to college, but immediately returned home.) Irene was needed at home to help take care of her youngest brother, Milton (14 years old). However, in 1927, tragedy struck again, and Milton died.

Their father, Clifford Kaser, remarried, traveled to Florida, came back, had surgery, and he too died in 1930.

Once Cliff left, Paul and Irene were on their own. I have traced Paul’s efforts at staying employed during the Great Depression, and Irene had an even harder time with no skills but her excellent housekeeping talent.  What I found about Irene was surprising, to say the least.

A rather confusing 1930 census lists Irene with a family that runs a boarding house as the servant doing general housekeeping in Orrville, Wayne County, Ohio.  However, special notations indicate that although she worked there, she actually lived with her brother Keith Kaser and his family in the same town.

Although I was not surprised to see Irene working as a housekeeper at the age of 32, her employer surprised me.  Under race, Henderson Cannon is identified as Negro.  A young white woman working for a black man would seem unusual in 1930 anywhere, but particularly in Wayne County, Ohio, in the center of Amish and Mennonite German/Swiss immigrants, where it was extremely rare to find any blacks, even to this day. The household of the 33-year old man from Mississippi, included his wife, 38, born in Arkansas, a four-year-old son and a 49-year-old boarder, all “Negro.” There was also a 21-year-old white boarder and a boy (14) who apparently lived elsewhere.  The men are all factory workers.

Whatever the circumstances of this unusual employment, it did not last long.  On March 20, 1931, Irene married Truman Lewis Bucklew, 33, a resident of Killbuck, Ohio.  On the wedding license application, her residence is Wooster, so she must have moved to another housekeeping job very shortly after the census of 1930. 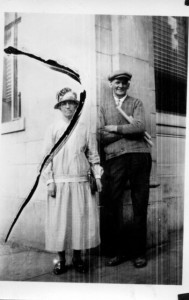 Truman Bucklew was still living at home with his widowed mother in 1930, and working as an automobile mechanic.  The quiet, handsome Truman has quite a story, including owning and flying the first airplane in Holmes County.  It seems to me that he would have been quite a catch, but like Irene, he did not marry until he was over 30.

I am so curious as to how they met and what the attraction was between the handsome adventurer and the homely housekeeper. Maybe it was her cheerful story telling, or her flare for cooking and sewing and making a comfortable home.

“She’s ugly as a mud fence,”Irene would say.

By the time he and Irene were married, Truman had acquired the Ford Automobile Agency in Killbuck, Ohio. (My father, Paul Kaser, worked as a bookkeeper for Truman’s car dealership for a time.) They moved to Killbuck, and Irene because involved in several activities. 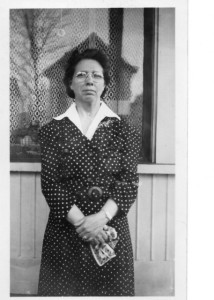 At first, she may have attended the Killbuck Church of Christ, but when I was in high school, I recall her taking me to a service of her Seven Day Adventist Church and she and Truman attending the church camp in Mt. Vernon at least once, so she had returned to her childhood religious roots.

The Ford dealership did not survive long in the depression, and in 1937, a small article in the personals column of the Coshocton Tribune tells us that Truman is working in Fredericksburg, but visiting on weekends. By 1938, Irene is living in Frederickstown, a different place so he may have changed jobs.

The 1940 Killbuck census tells a story of hard times. Truman, listed as an electrician instead of mechanic as he has been in the past, last worked for the REA (Rural Electrification Project), but has been out of work 22 weeks and is “seeking work”. His education ended with 7th grade, so he had been scrambling for any kind of work during the depression. Since the census was taken April 4, Truman had not worked since the previous October. They must have had a very bleak holiday season in 1939. Their entire household income was $450 a month from “other sources.”

Even though times were tough, Irene spent hours making a “Wedding Ring” baby bed quilt as a gift for my family when I was born in March 1939. The meticulous work on this quilt with its tiny squares of colorful fabric still impresses me. 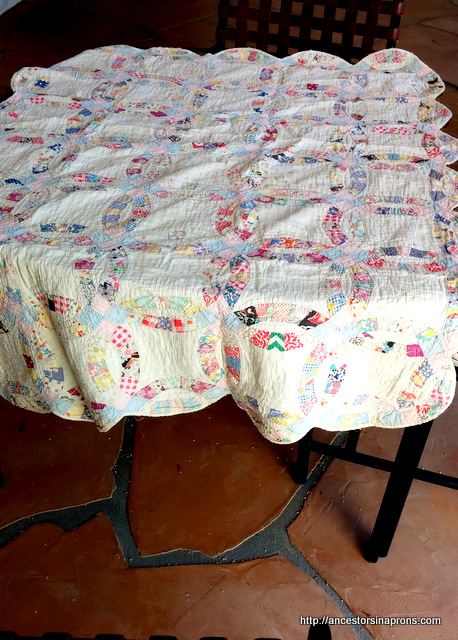 Each piece is approximately one inch square, but to make it more challenging, each must be hemmed with just the right amount of curve to fit into its circle. Care was taken to select colors that would blend pleasingly–made trickier by interlocking squares. Note that the interlocking circles each have a pattern of pink and blue, since in those days, no one knew until the baby was born whether it would be a girl (pink) or a boy (blue).  This entire quilt is hand stitched.

I don’t know if Irene ever entered her quilts in County Fairs, but they surely would have won many prizes.  When I think of visiting their house, I see a huge quilting frame taking up the entire living room and Irene and Truman’s sister Bertha ( who lived with them at the time I was visiting) bent over the colorful fabric taking careful tiny stitches while they bantered and gossiped.

“See you in the funny papers,” Aunt Irene said as I left her house.

The Coshocton Tribune had a Killbuck column, which featured personal announcements about people’s comings and goings and meetings, etc. I learned much about their lives from the archives of the Tribune.  For instance, Irene and Truman had recovered sufficiently by 1941 to celebrate their tenth wedding anniversary, along with Irene’s birthday and my 2nd birthday–all in March.  In a 1942 flower show in Killbuck, Irene swept up ribbons–two first places and two 2nd places. The newspaper tells me that Mrs. Truman Bucklew had major surgery in October 1942, but I don’t know what kind. The newspaper even told me in detail about a problem with wisdom teeth.

Irene and Truman enjoyed vacations in Florida and sent many snapshots home. 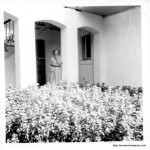 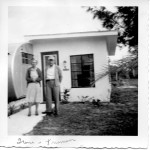 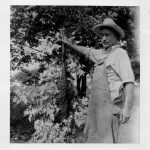 Thanks to the newspaper personal columns, I know they went to Florida in December- January 1956. I don’t know if that was their last trip, but on May 30, 1957, Irene died, just 59 years old.  The Ohio record of deaths says she died in Mt. Vernon, which is one more surprise to me. Perhaps she was visiting friends among the Seven Day Adventists. My family had moved to the Columbus area in the summer of 1956, and in May 1957 I was attending Ohio State University, so I did not return to Killbuck for the funeral.

My sister and I were talking about Irene the other day, and she said, “She is one of those relatives that I wish I had known better.”  Me, too.

“Oh, you’re full of prunes,” she would have said.

Photographs are my personal property except the headshot of Truman which is cropped from a photo found in a public tree on Ancestry.com

The wedding ring quilt is a family heirloom in my possession.