My mother’s special dish for Thanksgiving was a raw cranberry orange relish. 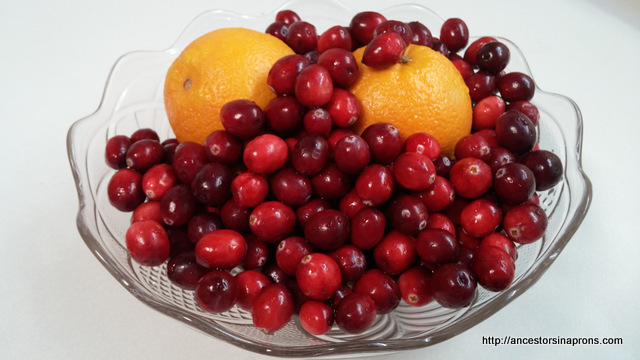 It is so simple, that I’m not even going to do the fancy recipe software with it.

The equipment, however, is a bit more complicated.

Mother’s recipe calls for “grinding” the cranberries and oranges, and she meant with this cast iron grinder: 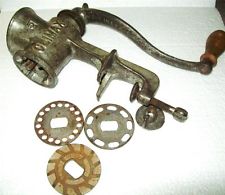 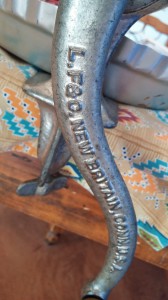 On the handle of my food grinder, identical to the one above, you can read L. F. & C. New Britain CT.  You can read the interesting history of that company, that first used the name Landers, Frary, and Clark 1862. [NOTE: Unfortunately that link is no longer good and the Wikipedia article about the company is incomplete.] The brand name is “Climax”, Model #51. This makes it a later model, although I have not yet figured out how much later, than the original “Universal” patented in 1897. I do know that my Grandmother Vera Anderson used it before mother used it.

But I’m sure neither one of those modern women would not have objected at all to using a Food Processor, even though she never owned one.  After all, she took to using an electric mixer with glee back in the fifties.  So here’s my “grinder.” 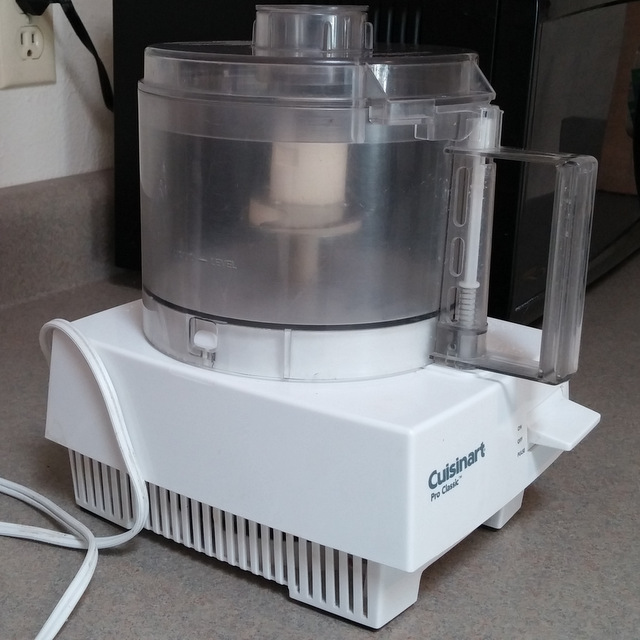 I divided the ingredients for the cranberry orange relish in half and ran half of it in each “grinder.” 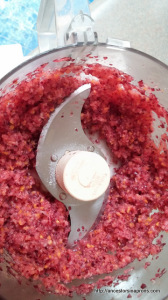 For the modern method, I dumped cranberries and roughly cut oranges into the container of the food processor. Pulsed it a few times, pushed down the sides and pulsed a couple more times and poured it into a bowl where I stirred in the sugar and nuts.  Took less than a minute. (Not counting assembly and cleaning–which has to be done with both tools.)

The vintage method, on the other hand, meant using a shallow pan to catch the ground fruit. 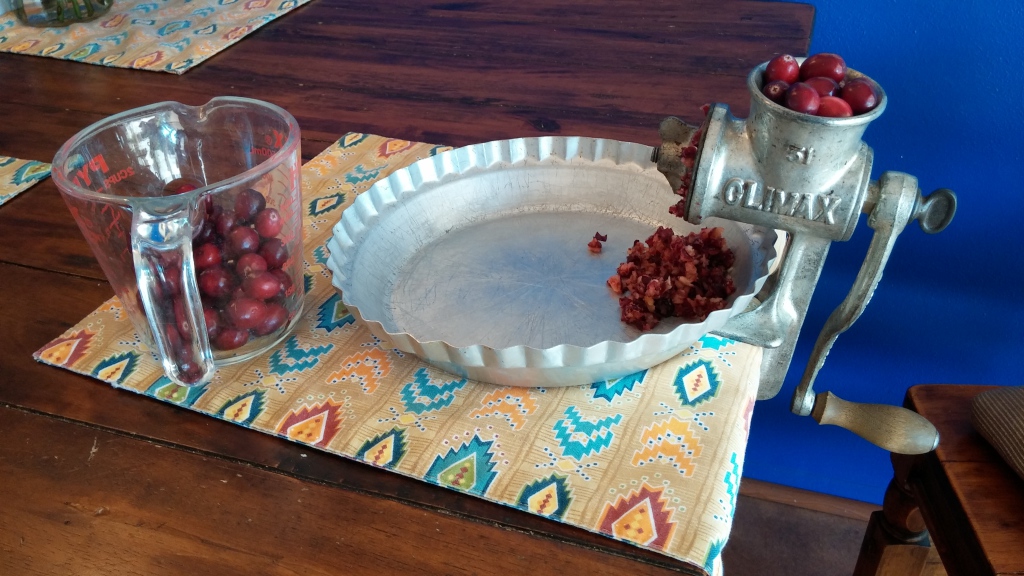 I could only do about 1/3 of the allotted cranberries at a time, and likewise had to grind only about 1/3 of the orange at a time. On the positive side, turning the handle is a muscle-building exercise. On the down side–turning the handle is muscle-building exercise. And it took several minutes to grind this small amount of fruit.

Besides the difference in physical labor and time, very few of us have wooden tables that are perfect for attaching the vintage meat grinder.  That clamp must be screwed tightly to the edge of a table where it can reach under the table for a couple of inches (that ruled out my formica-covered kitchen counters which have a shallow rim.) It will almost certainly leave a dent in the wood, so you don’t want to fasten it to your mahogany dining table. Furthermore, it takes a LOT of muscle power to get the clamp fastened securely, or else you spend all your time turning the crank a couple of times, and then straightening and re-tightening the clamp.

I think the vintage cast-iron meat and food grinder looks charming. But guess which tool I will use in the future to grind fruit for cranberry orange relish?