The boys don’t look as well as when we left Memphis.  I won’t weigh by 30 pounds as much as I did then.

This line toward the end of his letter somewhat contradicts his formal opening line.

I take my pen in hand to inform you I am well and hope you are all enjoying the same blessing.

While this letter is packed with complaints, and some yearning to be home on the farm where he is in control of his life, he also sympathizes with Civil War deserters. Once again Erasmus does not tell us about the battle he has engaged in.  Unlike the disaster of Chickasaw Bluffs, this latest one ended in a quick victory for the Federal troops and the capture of nearly 5000 Confederate soldiers–one-quarter of the Arkansas Confederate forces.

Erasmus’ last letter was written fifteen days ago and the regiment under De Courcey had been packed once again aboard boats to sail with a fleet including gunboats toward Arkansas Post/ Fort Hindman.  The little settlement of Arkansas Post had been started by Acadians, those French Canadians expelled from Nova Scotia by the British in 1755.

The Confederates built a fort on a high bluff overlooking the Mississippi River at the mouth of the Arkansas River and disrupted Union traffic on the river.  Generals Sherman and Morgan decided to divert their forces from Grant’s march toward Vicksburg in order to close down the fort.

After sneaking up on the fort by taking the White River and a cut-off, 32,000 Union soldiers arrived at a spot under the fort in the morning of January 10. 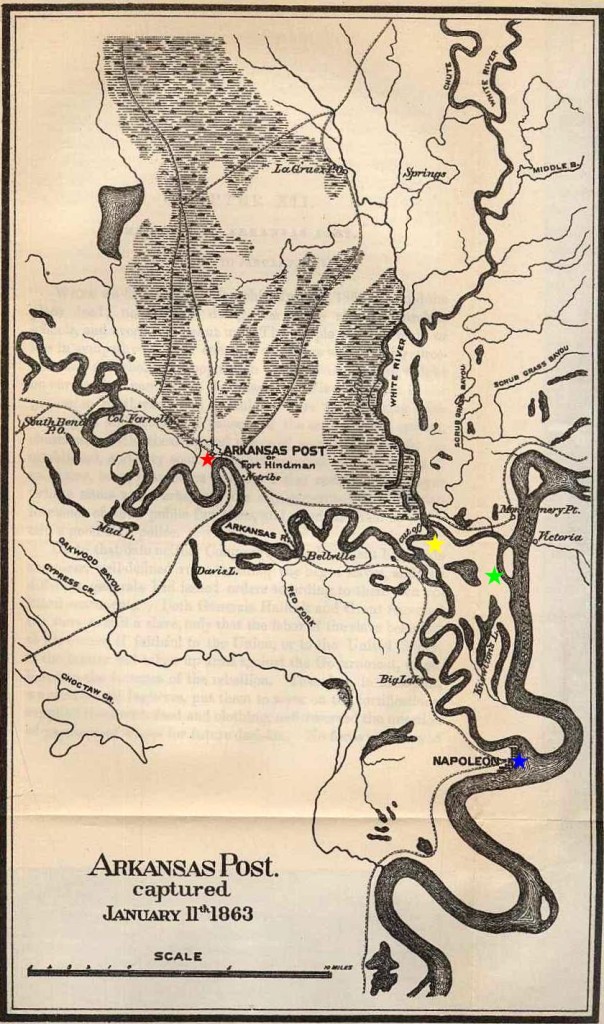 All day the gunboats pounded away at the fort as the infantry advanced to position. That night, Erasmus would have slept on the ground in a cornfield, after long hours of chopping wood and getting ready for the next day’s battle. 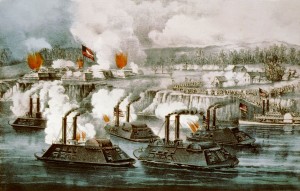 Currier & Ives print of the gunboats barraging the fort as the Union soldiers land. Print from Library of Congress.

At first, DeCourcey’s men were held back, since they had lost 1/3 of their number at Chickasaw Bluffs, but by afternoon, they were moved up to the front for an assault on the fort.  In very short order, white flags started appearing from the vastly outnumbered Confederates, and the Union forces began to cheer. 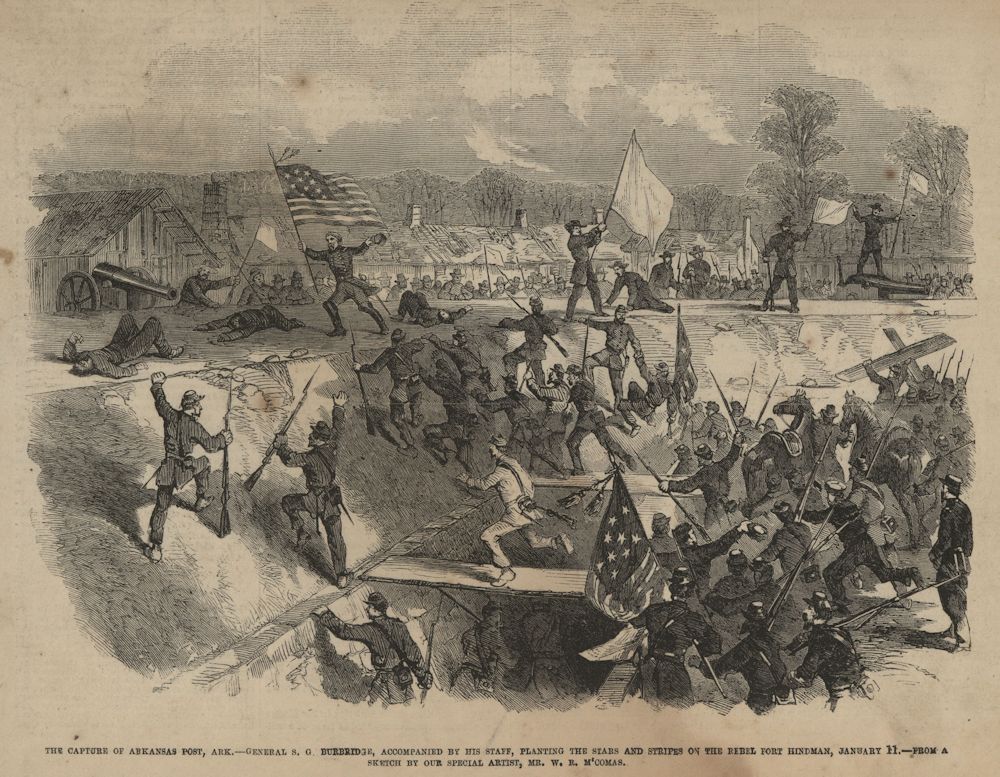 “The capture of Arkansas Post, Ark–General S. G. Burbridge, accompanied by the staff, planting the stars and stripes at the rebel fort Hindman, January 11–from a sketch by our special artist, Lt. W.E. McComas.”

One account, by Mark K. Christ in The Encyclopedia of Arkansas History and Culture, says that although the victory did little to help the major task of taking Vicksburg,

“…it did ease the movement of Union shipping on the Mississippi and raise the morale of the Yankee troops after their rough handling at Chickasaw Bluffs.”

And another account, by Pvt. Frank Mason of Co. A, 42nd Ohio Infantry–A History of the Organization and Services of that Regiment in the War of the Rebellion (1876) says,

“The army came down the Arkansas in splendid spirits and with the demoralization induced by Chickasaw Bluffs thoroughly cured.”

Not so thoroughly with all soldiers.  Erasmus remains his dour and doubtful self as he contemplates Civil War deserters.

All the prospects of peace I see is the soldiers is all going to quit fighting if this army was where they could they would totally disband, but there is somethings keeps them together. They all have five or six months pay due and they know they have earned it and they want it.  They are a long ways from home and no means to get there and no money, but there is a great many leaving as it is almost every night they swear they will not do such miserable service to free the negroes and they think it is not the wish of the government to stop the war at all.

While Erasmus indicated in earlier letters that he believed in maintaining the Union, if anybody thinks he is fighting to free the slaves, they are sadly mistaken.  Part of his rant is purely political, as he is a staunch Democrat and has no use for Lincoln and his government. He has the usual soldier gripes about not being told what is going on, lousy food, and his doubt that the leaders have figured out how to take Vicksburg.  One has to wonder if the army is withholding pay on purpose.  After all, the leaders are fully aware of the trials the soldiers are undergoing, so why give them the means to walk away? Civil War deserters have become a major problem on both sides, but particularly for the Union.

We have a pretty hard time and will have as long as this expedition lasts.  We are either all crowded on the dirty filthy lousy stinking boats [tell us how you Really feel, Erasmus!] or on land in the weather without tents or shelter of any kind.  Our rations is part of the time flour and no way to bake it fit for a dog to eat, or crackers, sugar or coffee and strong pork and sometimes not that for two or three days.  It is no wonder they want out of it I think but I don’t care, it’s alright as long as I am well I can stand it.

There is a good deal of sickness among the boys.  It is caused from bad diet and exposure. Diarrhea is almost a universal complaint.

It seems to me that Erasmus is becoming increasingly sympathetic to the idea of desertion, but as he writes to Suzy he pulls himself up short for fear of not sounding “manly.” Conditions are horrible, and others can’t take it, but he is tough. In fact, during the war an estimated 1 in 5 of the Union soldiers deserted–a total near 200,000. Ohio alone had 18,354 desertions so it is no wonder that subject preys on Erasmus. He personally knows men who are deserting.

Erasmus is still worried about Ephraim Cellars, whom he last saw on the hospital ship after the Chickasaw battle . He has had no news from his brother, Will Anderson, either.

Now that he has had a few days away from battle, and at last received a letter from Suzi, his attention turns back to the domestic problems at home.  He has heard from his sister Margaret Lisle and replied to her letter.  He learns that “Julia” is married. Should someone named John live on the farm with Suzi and be allowed to farm some of it?  Apparently the land belonged to “Uncle Joe” Cellars and he might want to keep it for “Sonny” (apparently Ephraim Cellars, the only boy in that family who was drafted).

Suzi needs help at home, but Albert’s wife has turned out to be a…, well, you think of a word. Erasmus gets so het up that he totally forgets punctuation.

I don’t see how you will get along by yourself.  I would rather Marjorie had staid if you could get along with her why I don’t see how you can go out to do anything and leave the children in the house.  I think you had better get her or somebody to live with you all the time you cannot get along without, when Albert’s wife leaves and I want her to leave without an considerations or else stop writing her lies here for she is as deceitful as sin and last fall she was mighty glad to get there but I know her whole plan and it may fail yet and not come out as good as she thinks for, anyhow I want her to leave on a double quick.

We learn in a later letter that Albert Deal’s wife is Alice, but I have found very little information about the two of them. In the later letter, E. will reveal to us the nefarious plan of Albert and Alice, although why bad-mouthing Suzanne Anderson is part of it, I do not know.

Clearly, Erasmus still thinks of himself as a farmer, rather than as a soldier, and he cannot resist issuing a couple of orders to his wife, who is now responsible for the farm.

Susy, I want you to get that bee hive up before the weather gets warm while you can and them young cherry trees up at the old house.  I don’t want you to let anybody take them away.  I want them to graft into.

After piling on all his worries, Erasmus abruptly ends the letter.

I will close by bidding you goodbye.

MODERN DAY CONFIGURATION OF THE RIVERS 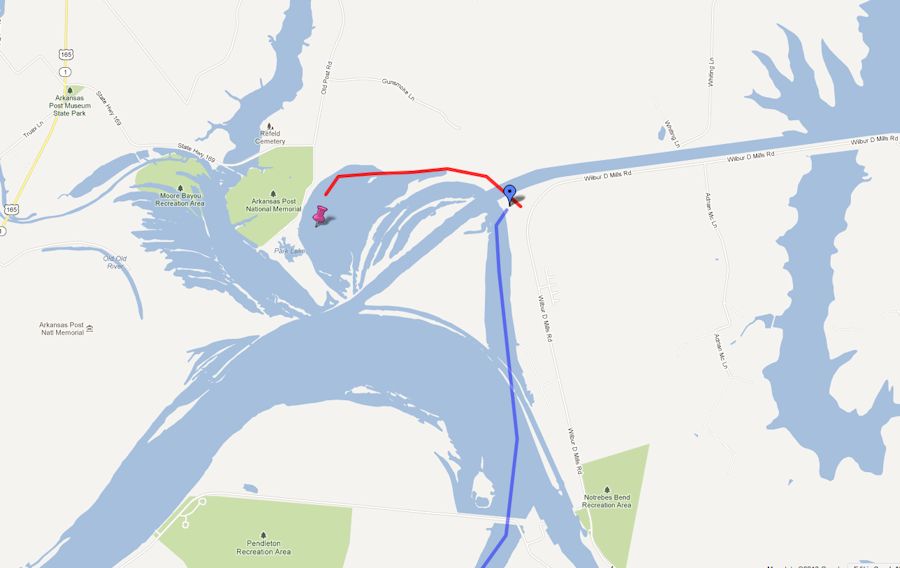 Map from the mkwe.com website shows what you will see if you visit the site today. The battle scene is now under water, and there is a canal that did not exist. The blue line is the route of the landing boats, and the red line is the general line of attack.

As I read about this battle, I could not help but wonder if Aunt Rhema Anderson Fair had any idea when she lived in Pine Bluff how close she was to a battle in which her great uncle fought.  The commander wanted to follow the Union victory by marching on Little Rock.  Not only that, but after capturing all of the remaining soldiers at the fort, the Union captured reinforcements who were arriving from Pine Bluff.

For the prior letter, #6, Civil War Wounded, go here.

The next letter, #8, Politics and Peaches, is here.

Notes: Besides the Civil War letters which I use with the permission of a descendant of Erasmus’ widow and her second husband, sources include: