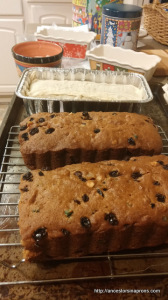 Mrs. Lanham, who made these fruit cakes, was short and well padded. She had one of those rubbery faces that results from having teeth extracted without replacing them with false teeth. She was loving and friendly, and could always be counted on to provide some sweets to a little girl.

You can see her at the top of the page in the picture of the Anderson restaurant. The woman 2nd from the right is Grace Lanham. Her arms are folded, her apron is tidy, and she has a net on her hair.

I always knew her as Mrs. Lanham.  She would have been about 47 years old in this picture, when she was working in the restaurant that Vera and Guy Anderson, my grandparents, ran in their home in Killbuck.

Even though she is not an ancestor–or even a relative–she did wear aprons, and she was a good cook.  So I was pleased to find a recipe card in my mother’s collection that was labeled “Mrs. Lanham’s Fruit Cake” with the note at the top, “Worked for Grandmother“, in case I had forgotten who she was.

This is definitely one of the easiest fruit cake recipes you will find. So you do not need to be intimidated. And if people don’t like fruit cake, call it “raisin cake.” It is, indeed very similar to Aunt Rhema’s raisin bars. 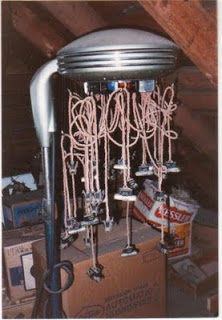 Mrs. Lanham lived just across an alley from the Andersons, in a tiny brick house that had once been a post office. The building later served as a beauty shop where I got my first permanent on one of those machines that looked like an instrument of torture.  But I digress.

This fruit cake recipe has to be one of the simplest ones in existence.  Of course, I couldn’t just let well enough alone. I had to add a few touches.  But I resisted gussying it up by putting red and green maraschinos on top of the dough to decorate it, but of course once you bake it, it is YOUR recipe, so feel free to gussy away. 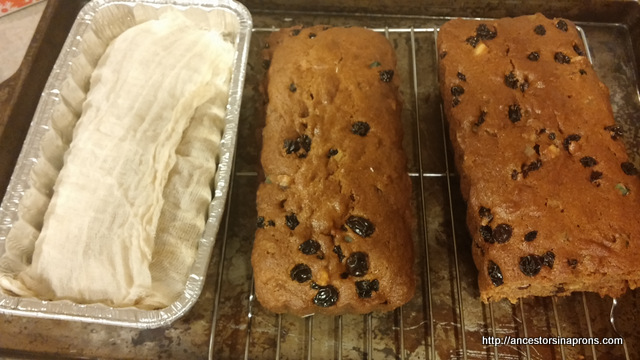 Mrs. Lanham’s fruit cake. The one on the left has already been wrapped in a brandy-soaked cheesecloth.

I will admit that this is not a regular at my house, but only because I make Emily Dickinson’s  Black Cake every year. (Feel free to follow that link and compare her more complex cake, which I refuse to call fruit cake.)  I borrowed a bit from Emily, and wrapped Mrs. Lanham’s cake in brandy-soaked cheesecloth.  I don’t think she would disapprove (although she no doubt was baking this during Prohibition, and I can’t really see her buying bootleg liquor).  It is just that Mrs. Lanham’s fruitcake was probably developed during Depression and War years, when some products were scarce.

In fact, if you’re baking for someone with an egg allergy, note that this cake has NO eggs! 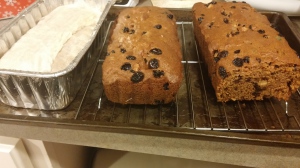 I thought the one teaspoon of cinnamon was not spicy enough, so I added another teaspoon, plus a 1/2 tsp of mace. That still did not make an overly spicy cake. You could add cloves or other spices to your liking.

On the recipe card, my mother noted "Nuts, etc. may be added." I decided to add some "etc." and put in some mixed candied fruit I had left from another project, as well as some currants.  I think I would prefer at least half currants.

As you can see in the picture, I used three medium sized disposable loaf pans, since I will be sending two of these to other people. That made for rather thin cakes, and I think it would be better to use two of that size, or just one loaf pan or a tube pan.

My final adjustment, was to wrap the loaves in cheesecloth soaked in brandy. It adds flavor, and also preserves the cakes. Highly recommended.