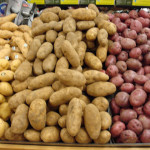 Potatoes. Such a plentiful and cheap food for my Irish and British ancestors, and the early settlers in America.  But they can get boring (apologies to my sister who never met a potato she didn’t like). So our ancestors in aprons found a variety of ways to cook them.

A dish of Scalloped Potatoes, like Welsh Rarebit ,is a old-fashioned comfort food.

But before I get to today’s recipe for Scalloped Potatoes, I want to tell you about my experience at stoop labor–digging potatoes.

When I was attending Killbuck High School in Ohio, the class always wanted to raise money with various projects. Other than buying something to leave as a gift for the school when we graduated, I don’t know what the money was for.  But I do know of one smart farmer up near Wooster who figured out how to take advantage of the high school slave labor market.

The potato farmer contacted schools and offered to pay some paltry amount to a class if they came and dug potatoes in his fields during potato harvesting time. Our class bit.  It was quite a lark–particularly for the townies. The kids who came from farms may have been thinking we were downright crazy. On the other hand, they probably didn’t go along because they were doing actual work on their own farms.

We piled into a school bus (rules for outings were more lenient in the 50s) and were delivered at the potato field.  The furrows had already been dug up mechanically, so all we had to do was pick up the potatoes and put them in a sack and carry them back to where they were being weighed.  What was a lot of fun with a lot of joking and flirting and competition, got old really fast as dirt caked our arms and legs and muscles screamed from all that hauling.

In retrospect, that day in the potato field might have had something to do with the inordinately high percentage of students from our tiny school who wound up going to college. Anything but potato picking to make a living!

Meanwhile, although that experience might have had something to do with my disdain for eating potatoes, there was one dish my grandma Vera Anderson, and my mother, Harriette Kaser made that I loved for its creamy goodness. 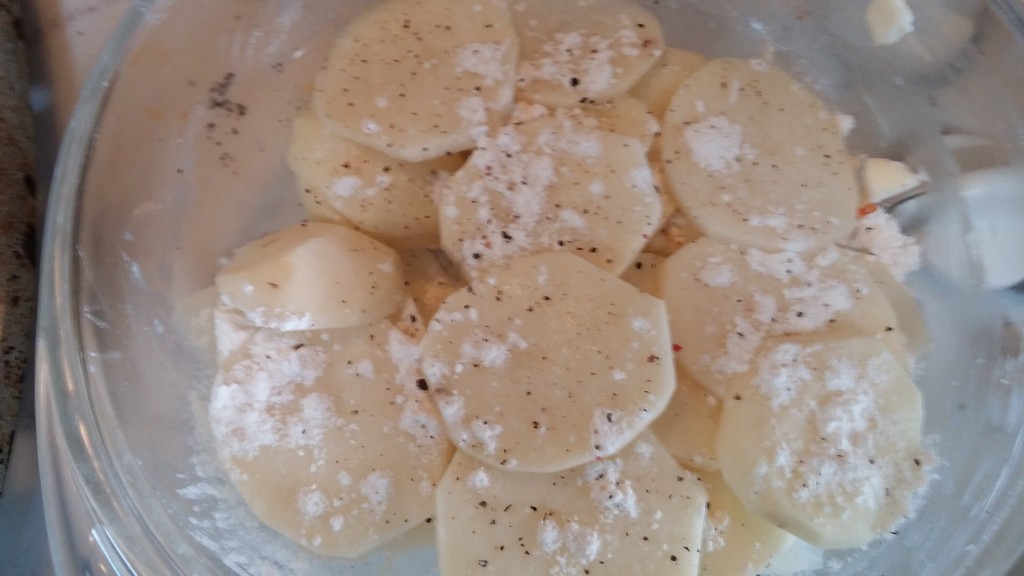 scalloped potatoes ready for the oven with flour sprinkled over the slices.

I have tried to find out why scalloped potatoes are called “scalloped”.  Among the various theories, the most likely is that “escalloped” refers to meat sliced very thin.  The secret of success with scalloped potatoes is thin slicing–the term probably moved over to potatoes.  I would have thought that might be a Norman word imported into England, but Google sources say it comes from the Old English word “collops,” referring to shredded meat. Whatever.

Basically, scalloped potatoes require only potatoes, salt and pepper, butter and milk or cream. I learned the hard way that adding flour helps make the sauce into sauce instead of just a bowl of milk.  From the beginnings you can add cheese (for au gratin–or “cheesy scalloped potatoes”) or meat, or different seasonings.

The technique varies, too.  Cook the potatoes first before layering and baking. Cook the sliced potatoes in the sauce before baking. Cook covered. Cook uncovered.  Here’s a heritage recipe that worked well for me (and other than the fact that I don’t recall my mother using flour, seems to parallel the family recipe). 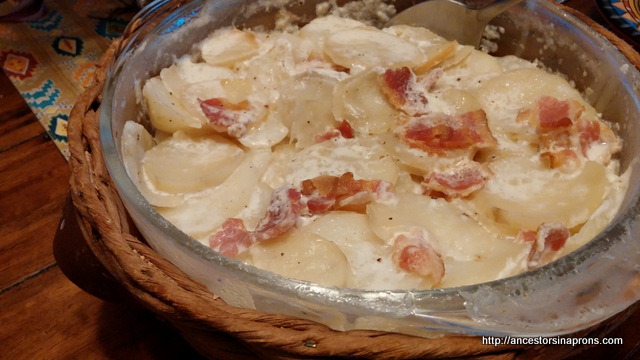 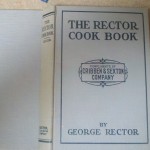 From The Rector Cookbook by George Rector (1928)
Wash and peel the required number of potatoes and slice in 1/8 inch thickness.  Butter a baking dish and cover bottom with a layer of sliced potatoes.  Sprinkle lightly with salt, pepper and flour and dot with several small pieces of butter.  Continue layers of potatoes and seasonings until required quantity is used up.  Then pour milk over all and bake in a moderate oven 50 minutes.  Serve from baking dish in which they were cooked.

Oh, wait….you want details? Okay, here’s the recipe as I made it. (Except you have to decide for yourself how much salt and pepper to use.) The pyrex dish in the basket with a wooden base (pictured below) was a practical wedding present given to Ken and me and is still in use in my kitchen. 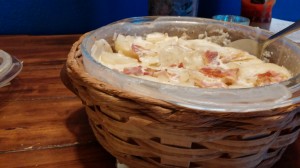