I love making soup, and this adaptable variation on a traditional German cabbage soup manages to pay tribute to the German ancestors while cleaning out my refrigerator at the same time. 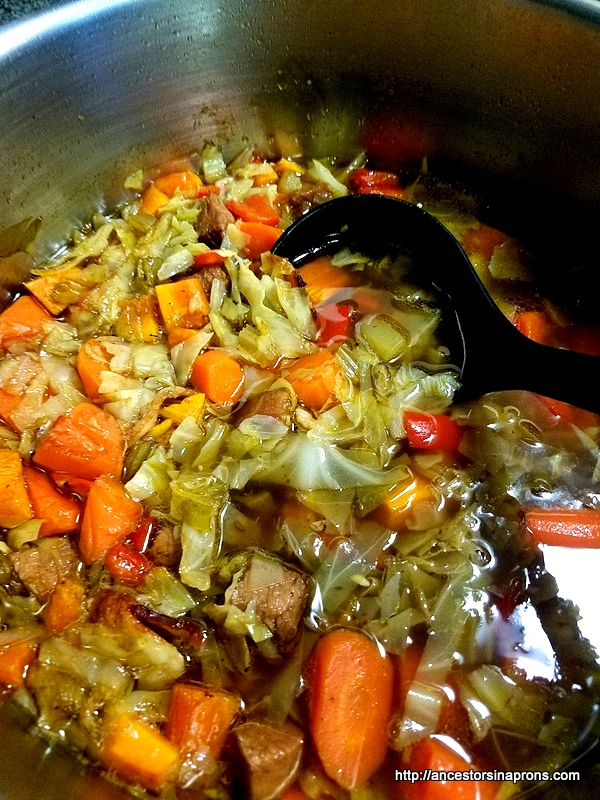 I will give you a recipe, but please don’t feel bound by anything you see.  Well, except the cabbage and the vinegar and caraway, because that puts the ZING in this Zingy soup.

I used pieces of bacon and some leftover cooked ham.  Browning the vegetables in the bacon grease adds depth to their flavor. 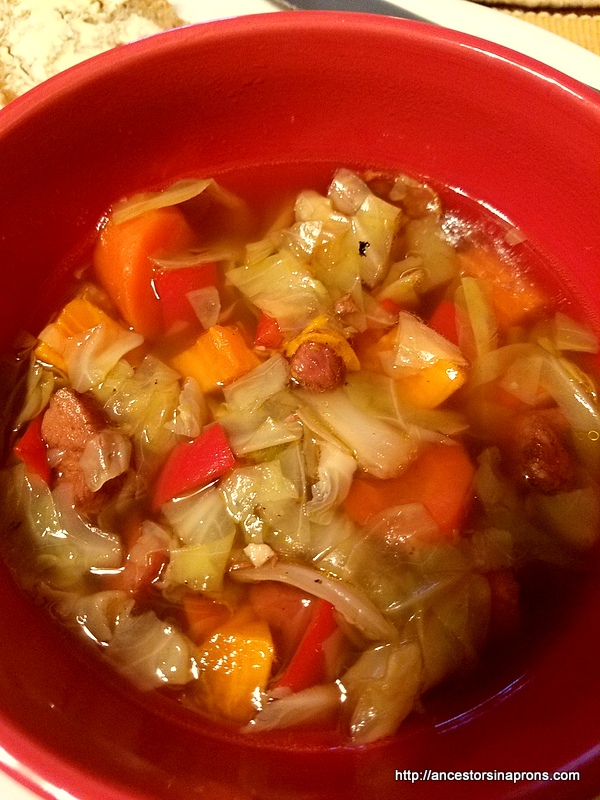 A bit of vinegar makes your vegetables zippier.

And caraway gives this soup a unique flavor. 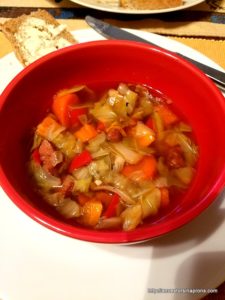 I did not add salt because the ham and bacon added enough salt.  You might make it with ground beef, in which case you probably would want to add salt.

The soup can be made vegetarian by using vegetable broth and no meat.

I used a sweet potato instead of a regular white potato.

If your potatoes are thin-skinned and organic, don't bother to peel.

I did not add onions, but leeks or onions can also be added. In fact feel free to use whatever vegetables you want.  The recipe is very adaptable. 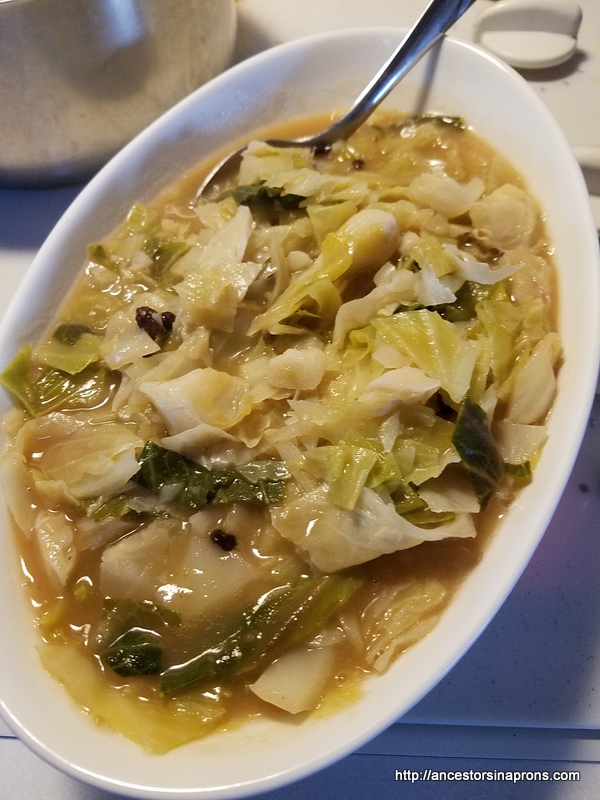 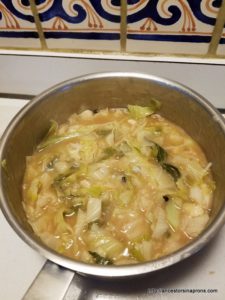 JANUARY 2019: This post was originally written early in my experiments with bread, and I have since baked pumpernickel several times, and have added some techniques that I believe improves on the recipe I adapted from Smitten Kitchen, so I have deleted some of the description of my previous problems and gone straight to the new recipe.

Mmmmm, what represents our grandmother’s and great-grandmother’s culinary skills more than baking bread? The house fills with a yeasty smell. The family gobbles down the warm, soft pieces of heaven. For our ancestors in aprons it was not an “artisan” event–baking bread was just one of those chores that came around every week.

And for my German ancestors, if they had a bit of rye in their fields–or their neighbors did–they would certainly be making rye bread. And probably the queen of rye breads–dark, dense, sweet and fruity Pumpernickel.

There are two kinds of German Pumpernickel–the kind with yeast and the kind without. The kind without we’ll try another day, but this week I’ve been making pumpernickel. And my foray into replicating my ancestors in aprons made me wonder about something I had never thought about before. What did Great-Grandmother do with her mistakes? Surely not everything that came out of a wood-fired stove or a fireplace was a guaranteed success.

The 2018 version of the bread turned out beautifully, following bread-making tips from KIng Arthur’s Flour.  (See photo at top of column.)

Well, the bread I made the first time I tried was absolutely delicious, particularly with a little of that Ohio Smucker’s apple butter smeared on top. 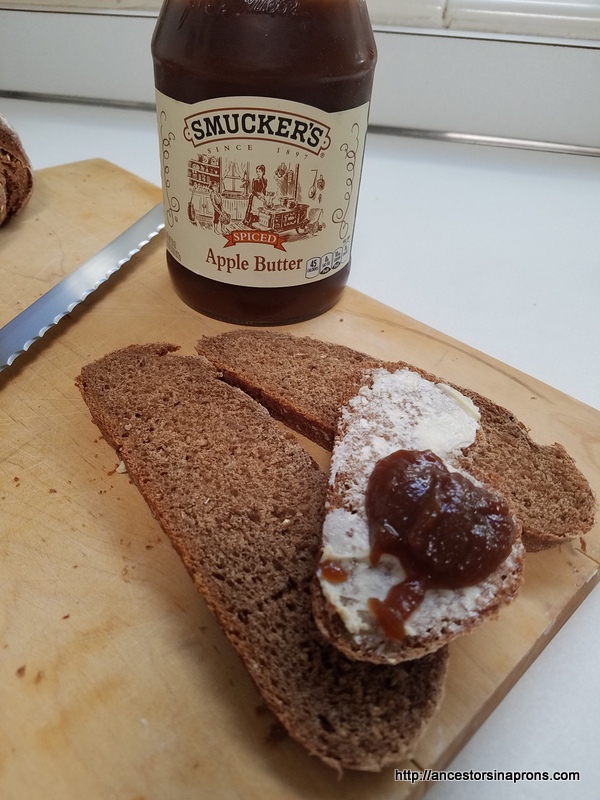 Delicious? Yes.  But pull the camera back a bit… 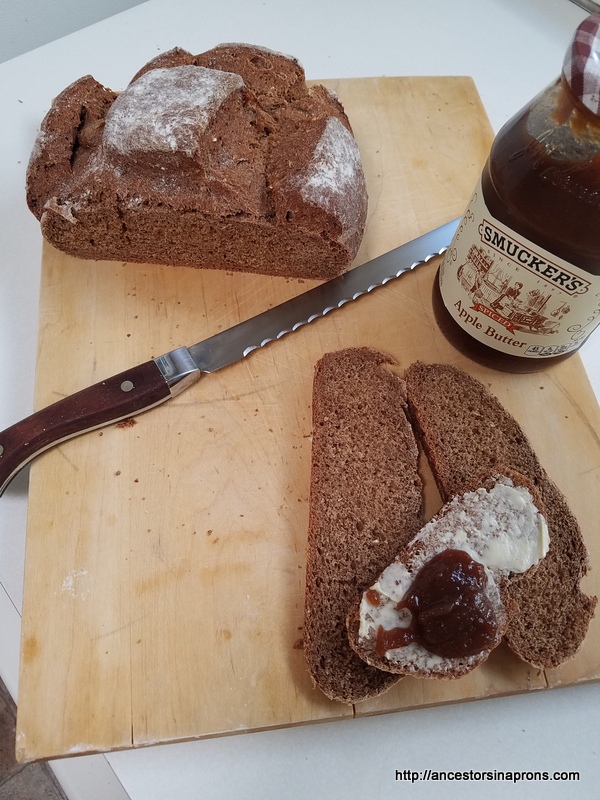 What is that blob in the background?  Sorry to burst your bubble–but that is what the loaf of pumpernickel bread looked like.  I had not conquered the slash on the top technique.

What’s in a Name?

Now, it is absolutely no excuse if I explain to you the root of the name Pumpernickel.  Believe it or not pumpernickel was named for the effect that some foods have on the digestive system making you—-well, in polite company we would say, “break wind.” This comes about because of people who looked down on the rough rye bread made by the Westphalians in what is now Germany, saying it , uh, caused flatulence.  And the Nickel has been explained as a reference to Old Nick–the Devil.  So (cover your ears if you’re sensitive)–doesn’t my bread look like it has been blown apart by the Devil’s fart?

The Newest Attempt at Pumpernickel

By the way, you may notice that the bread from the newest recipe (FIrst picture) is darker and shinier than the pictures below (which was the first attempt).  That’s because I painted the top with a egg mixed with water before baking. The darkness in pumpernickel comes from adding cocoa powder. It works great.  Some people kick it up a notch by also adding coffee or instant coffee granules.

I’m sharing the recipe, enhanced in 2018 with additional specific directions that should help you succeed with pumpernickel–experienced baker or not.

Let me know how it turns out for you. 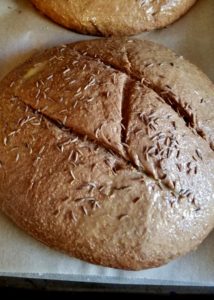 Pumpernickel Bread is moist and dense. To get the dark color you love, add some cocoa powder.

*If you are using INSTANT dry yeast, here are the instructions for substituting for ACTIVE dry yeast (taken from the King Arthur Flour's website.)

"In days gone by there was a significant difference between active dry yeast and instant yeast. Today, the difference is minimal, and the two can be used interchangeably—with slightly different results."

"ADY, compared to instant yeast, is considered more “moderate.” It gets going more slowly, but eventually catches up to instant—think of the tortoise and the hare. Many bread-bakers appreciate the longer rise times ADY encourages; it’s during fermentation of its dough that bread develops flavor."

*Use the same amount of Instant yeast as called for in the recipe.  Just mix it in with the dry ingredients.

*The oil is listed before the molasses for a reason. If you measure the oil first, then use the same spoon to use the molasses, the molasses will not stick to the spoon. (The downside is you don't get to scoop it out with your finger and lick your finger--not that I would do that.)

*Some recipes double up on the darkness factor by adding a couple of teaspoons of powdered instant coffee.

*Pros use some moisture in the oven for the first 5-10 minutes of baking. Put a shallow pan of water on a shelf below the bread or spritz the oven with water a couple of times after it is warmed.