Celery is a master of disguise when it comes to taste and presentation.

The leaves have a very slight bite and make a nice “herb” to add to all kinds of dishes, plus making a pretty garnish. Logical, since celery is related to parsley. (Check out the history of celery and a few cooked dishes.) 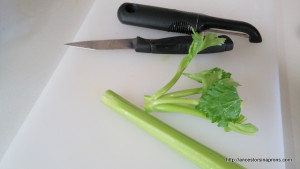 Grandma Vera Anderson liked to dip raw vegetables into a little pile of salt on her plate, and it is still indispensable on a crudite tray. 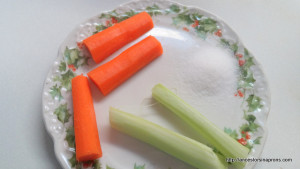 Celery and carrots with salt on Grandma Vera’s butter plate

When my sons were little, they could be conned into eating celery if I stuffed it with peanut butter or Cheese Whiz. Now I’ve graduated to more sophisticated spreads, like this dried tomato cheese spread. 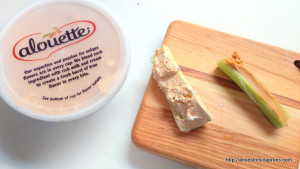 Now that I cannot eat onions, I tend to double up on chopped celery in stews, stir fries and such– to get the little crunch you get from onions that I have to omit.

But what I do not do, is cook celery alone as a side dish. Why not, I wondered, when I saw a recipe for stewed celery in the Civil War Recipes: Receipts from the Pages of Godey’s Lady’s Book

. I  vaguely remember the taste of creamed celery, so maybe grandma cooked it some time. This recipe was published in Godey’s in 1862, so even though I doubt that Anna Butts was a magazine reader back during Civil War days, it probably was a common enough method that she would have known about it. And I imagine she planted celery in her garden. And I know that Hattie Morgan Stout was reading Godey’s, along with her mother Mary Morgan, for whom it was a lifeline to civilization.

This delicious and economical  recipe, like so many from the 19th century, is vague on details, so I am going to quote the recipe verbatim and then give you my version and some notes on why I made changes. It seems that the bitterness that called for stewing of celery in milk and adding lemon has been bred out of the modern plant, because I do not think of celery as bitter at all.

Take off the outside, and remove the green ends from the celery; stew in milk and water until they are very tender.  Put in a slice of lemon, a little beaten [grated or ground] mace and thicken with a good lump of butter and flour; boil it a little, and then add the yelks of two well-beaten eggs mixed with a teacupful of good cream.  Shake the saucepan over the fire until the gravy thickens, but do not let it boil.  Serve it hot.

My Version of Creamed Celery 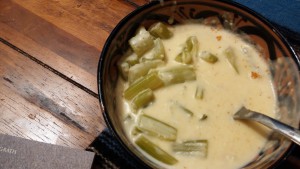 I have eliminated the lemon slice called for in the original. I tried it when I cooked this and it curdled the milk. (Of course!)  Plus, I did not think the lemon taste added anything.

Mace is another part of the same plant that gives us nutmeg. I like it very much. It has a slightly milder flavor. But feel free to substitute nutmeg.

I wound up with a lot more sauce than was necessary. If I were making it again, I believe I would pour off some of the milk/water that the celery is stewed in before adding the other ingredients.

I used only seven stalks of celery and it made enough for two servings and seconds, but if cooking this again, I believe I would use a whole bunch of celery. It takes a bit of work to make this, the leftovers are delicious, so why not have planned overs?

I can’t think about a particular ancestor without wondering about what they ate. For instance, while my great-grandfather,  Henry Allen Butts, was in the Union Army, marching through the South under General Sherman, his wife Anna Mariah Smith Butts was at home with an infant son.

It sounds like she was  boarding with another family, but I wouldn’t be surprised if she helped out with the family vegetable garden and with the cooking.  After all, she had a reputation within her family for her own vegetable and flower gardens after Henry came home and they had their own place. 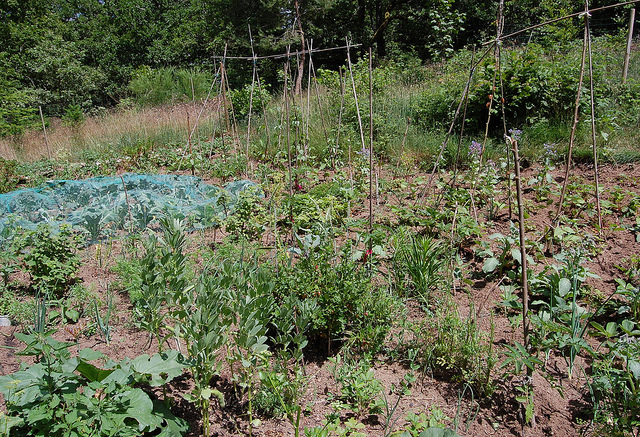 The vegetables she grew were not just a hobby–they were essential to feeding a family during the Civil War and during the recession that followed the war.  So I went back to Lady Godey’s Civil War cookbook to see if I could learn what Civil War era wives were doing with vegetables.

The book, Civil War Recipes: Receipts from the Pages of Godey’s Lady’s Book

, edited by Lily May Spaulding and John Spaulding, is a gold mine of information for a mid 19th century kitchen. The chapter on vegetables alone can keep you busy for hours just reading.

One of the entertaining things about this book is that it gives all kinds of helpful hints about cooking. Most of these admonitions still apply, although we have learned that some of their “hints” are actually detrimental.  The chapter on vegetables starts with general instructions on cooking all kinds of vegetables–wash them well, boil them and drain them. But I particularly enjoy the warnings generally headed “Bad cooks….”

Bad cooks sometimes dress them with meat, which is wrong, except carrots or cabbage with boiling beef.

So now you know. Don’t go cooking your meat with your vegetables.

On the other hand, serving them on the side takes judicious combining.

Potatoes are good with all meats.  With fowls, they are nicest mashed.  Carrots, parsnips, turnips, greens and cabbage are eaten with boiled meat; and beets, peas and beans are appropriate to either boiled or roasted meat. Mashed turnip is good with roasted pork. 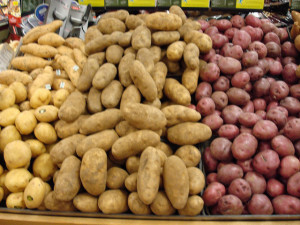 Since potatoes are good with all meats, I decided to check what they suggest doing with that most common vegetable. Interestingly, baking vegetables doesn’t enter the scene–everything is boiled. Maybe a little sauteing–or frying. And Grilled? Far in the future.

Many good cooks are bad managers of potatoes, and this esculent, which in most houses is served every day, and which is so popular in many families as to be often the only vegetable at table, requires much care in the cooking.

After a run to the dictionary to find out what “esculent” means–something edible–I eagerly read along to see what “good cooks” do better than “bad cooks” when it comes to potatoes. The advice makes great sense.  The detailed instructions boil down (pun intended) to allowing them to stay hot and dry out after boiling to make them mealy rather than mushy.  In fact, the author of that advice is intent on serving the potatoes hot and recommends serving a few at a time so that “relays of hot dishes of them may be ready to go in with every fresh course with which they are at all likely to be required.”  That makes perfect sense, and I intend to follow the advice to drain the pan and put the potatoes either in a dry pan or in the oven to dry out after boiling.

But there is more to the life of a potato than boiling–so what else to they recommend? I’ve added the year the recipe appeared in Godey’s.

Potato Balls– 1863 (I swear these are really Tater Tots! And they DID eat catsup during the Civil War.) 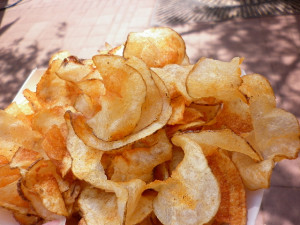 Potato Chips -1865 (Invented by George Crum in Saratoga Lake, NY in 1853, but rarely if ever mentioned in home cooking books until Godey’s.)

Potatoes Mashed with Onions – 1862 (More of a suggestion than a recipe–just boil the amount of onions you would like and mix with the mashed potatoes.)

New Potatoes A La Francaise – 1867 (The recipe notes “In Italy olive oil is used rather than butter, but butter is really preferable.”)

Potato Salad, Hot – 1861 and 1865 (I have no doubt that Anna and her fellow German descendent families in Ohio made hot potato salad. The dish is described as “A wholesome and pleasant dish for spring and early summer.”)

Sweet Potatoes A L’Allemande – 1867 (Although I thought this meant sweet potatoes, the editors say you should use white potatoes. They say the ‘sweet’ refers to the sugar used in this tart-like dish.  I would like to try it with sweet potatoes also, however.)

So that’s how Annie may have cooked her potatoes if she got tired of boiled.  Next week–more vegetables from Annie’s garden.

If you want to see what the soldier’s were eating during the Civil War, I had several pieces about that last year when we were reading Erasmus Anderson’s mail. Just follow the links to his letters and above or below each one, you’ll find something about Civil War Food. Your favorite was Civil War Rations: Hardtack and O. B. Joyful.

Note: There is an Amazon link here to help you if you’d like to get your own copy of the Lady Godey’s Book Civil War Recipes. You should know that anything you buy from Amazon through these links earns me a few cents, even though it costs you no more. THANKS for your support.