I just have to talk about tea today. 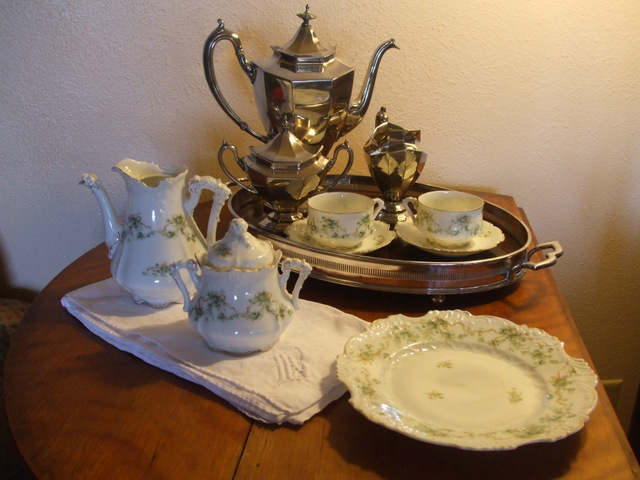 [One of my more elaborate heirlooms, my aunt Maude’s tea paraphernalia dates to about 1910.]

NOTE: Just in case you think I should be talking about Irish food (like Soda Bread) with St. Patrick’s Day coming this week , I hasten to tell you that the Irish are the biggest consumers of tea per capita in the world!

What brought tea to mind?

For my birthday I received not one but three books on tea, plus various kinds of tea to try.

On Thursday this week, I’ll be talking about my parent’s political involvement and mother’s attendance at a tea.

Sometimes the universe seems to point me in the direction of the particular kitchen item I need to cover.

Tea (as opposed to herbal infusions) is so prevalent as a beverage today, that we sometimes forget that it was only introduced to Westerners in the mid 17th century. What a series of ups and downs in popularity it has seen in America! Here’s how the ancestors in prons in my maternal line–my grandmas and me– might have seen tea.

In addition to the signs above, I was reminded once again of the political role of tea while reading The Midwife’s Revolt by Jodi Daynard, a novel set in the Revolutionary War period.  The main character, whose best friend is Abigail Adams, worries about insulting Abigail by serving her real British tea which was obtained by Tory friends. However, even the good patriot Abigail is delighted to have the real beverage for a change.

I highly recommend this book for anyone who wants to see real life among their New England ancestors during the Revolution. I could certainly picture Elizabeth Howe Stone as she sent her husband Jedutha Stone off to war, and the relief she might have felt when real tea was once more available in Sudbury Massachusetts.

Tea, coffee and chocolate, all introduced to Europe in the mid-17th century, were popular among the emigrants to Amerca. Silversmiths in American had thriving businesses supplying the pots for tea, containers for sugar and cream for afternoon tea. However, in 1765 the Stamp Act and in 1767 the Townshend Act imposed heavy import taxes on teas in the British colonies, and fanned the flames of the brewing  Revolution.  Americans went back to drinking their (hard) cider or herbal teas like raspberry (called Hypernion Tea) and loosestrife (called Liberty tea). [Loosestrife is a purple-flowering plant that grows in wetlands, and the tea supposedly has astringent qualities and can be used to cure diarrhea.]

Here is an earlier tea pot, probably used with British tea before the boycott, and with unsatisfactory substitutes after. 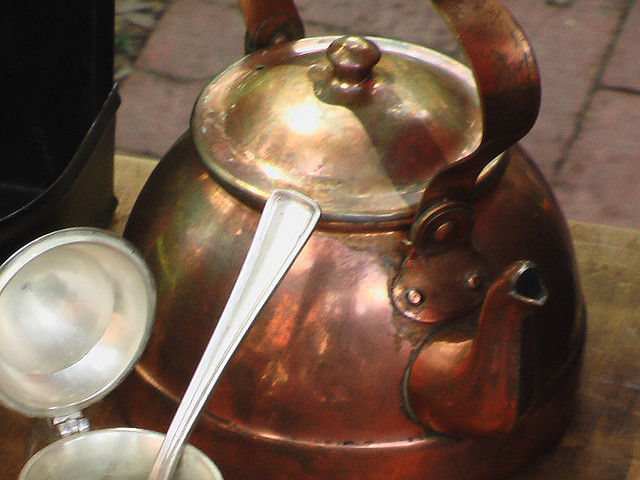 When the war ended, Americans went back to drinking tea from the East Indies.

By the Civil War, the lack of tea was due not to a political action in America, but by the British blockades that kept imports from reaching our shores.  Mary Bassett Platt Morgan,  reading Godey’s Lady’s Book, no doubt was still trying to adjust to life on the frontier after her relatively more civilized upbringing in New England.

She may very well have tried many of the recipes and followed the tips from the issues of Godey’s Lady’s Book that are mentioned in the book, Civil War Recipes: Receipts from the Pages of Godey’s Lady’s Book . The compilation includes an 1863 article entitled “Economy of the Tea Table.”  It instructs the housewife on how to tell real tea from adulterated tea. I have no doubt in far inland Ohio during the Civil War blockade, getting real tea would be quite a challenge.

As a test in general to distinguish genuine tea from the sloe-leaf, let it be infused, and some of the largest leaves spread out to dry; when the real tea-leaf will be found narrow in proportion to its length, and deeply notched at the edges with a sharp point, whilst the sloe-leaf is notched very slightly, is darker in color, rounder at the point, and of a coarser texture.

“Sloe-leaf”? According to an herb gardening web site, sloe refers to the blackthorn bush. They say, “The leaves, when they unfold late in the spring, are small and narrow. If dried, they make a very fair substitute for tea, and when high duties were placed on imported tea, it was usual to find the sloe trees stripped of their marketable foliage.”

The practice of diluting tea with sloe also concerned Britain.  A book published in 1855 of House of Common Reports in the British Parliament discusses the problem of pubs and others passing off tea that has been adulterated with the cheaper sloe leaves.

“Can you say anything respecting tea?”

“Yes that is also extremely adulterated with other leaves, such as sloe and hawthorne.”

Hattie was a great reader like her mother. A school teacher, she saw thirteen of her students go off to fight in the Civil War, and was always delighted to say that they all returned uninjured. As the husband of Dr. William Stout, eclectic physician, Hattie Stout was well versed in the use of herbal infusions, or teas, for treating various ills. I have no idea if she was a fan of tea for itself but I do know that she and the Doctor attended the St. Louis World’s Fair where the first iced tea was allegedly peddled.

I do know that my grandmother, Vera Anderson loved iced tea (with a lot of sugar, just like Aunt Sarah). When she ran a boarding house and a restaurant, I am guessing they served gallons of coffee to each cup of tea, but served up iced tea in sultry Ohio summers.  The restaurant was operating in the 1930’s, and by that time tea bags were available, making tea service easier.

An American reportedly invented selling tea in individual tea bags, and Lipton commercialized the idea in 1930.  While the British first disdained tea bags, up to 90% of tea sold in Great Britain is now sold in tea bags.

Tea bags would have suited my grandmother much more than that fancy tea set pictured above. That belonged to her sister and direct opposite in personality, Maude Stout Bartlett.

Americans adopted iced coffee in the mid 1800s and it was a favorite of my mother, Harriette Anderson Kaser.  The dregs of the morning coffee pot would be poured into a container to be stored in the refrigerator until dinner time. Although she drank her hot coffee black, she might add milk to the iced coffee.

Iced tea came in second in favor, although nationally it had became an incredibly popular alternative to soft drinks.  As I have pointed out before, my mother always had mint growing by the house and loved a sprig of fresh mint in her iced tea. I have written before about making mint tea, a delicious way to add some zing.

On those road trips through the South, my mother must have learned about the Southern version of tea–sweet tea. Southern sweet tea is overly sweet in the eyes of a mid-Westerner–except for Aunt Sarah and Grandma Vera.

A lemon iced tea is mentioned in an 1876 cookbook, so the present drinks called “Arnold Palmer” –or perhaps “John Wayne”,  names applied to a tea and lemonade mix, are not as new as you might think. Since mother was an avid golfer, she would have preferred the moniker “Arnold Palmer.”

We were fascinated by “sun tea” when we first moved to Arizona in the 1960s. Although sun tea has been adopted in other places, it works best under the hot summer sun of the desert, where those teabags in a gallon jar of water turn to real tea, not just weak-colored water. And we drink gallons and gallons of iced tea in the summer.

In the late 50s, the commercial powdered instant tea emerged, catering to the American wish to make things simple while disregarding taste entirely.  An abomination in my opinion. In the 1970s, it was all the rage to mix powdered tea and powdered orange drink, with cinnamon, cloves and sugar. Okay, if you insist–I’ll share the recipe.

This recipe is all over the Internet, and in some cases it is referred to as Russian Tea.  Trust me, in the 1960s  at the height of the Cold War, we would not have been calling it Russian!

“What instant iced tea is lacking in nutrition and antioxidants, it makes up for in potential dangers.”  Don’t say I didn’t warn you!

Today tea snobbery is in full flare in the U.S. I admit to being an absolute tea snob. Although I also admit that I drink my tea in a large, heavy mug as opposed to the delicate china of Aunt Maude.

I always hated the taste of coffee, and I enjoy exploring the various varieties of tea as much as learning about wine grapes and vintages. For instance, I learned from my birthday books that the best tea is made from the top two leaves and the bud of each branch of the tea plant. And the VERY best is the bud only.  That actually is my favorite–sold as White Tea, or Pai Mu Tan.

Loose tea is selling more each year, and in more exotic varieties and mixtures.  We appear to be coming full circle, moving away from the convenience of the dependable sameness of Lipton in a bag back to the variety imparted by adding herbs and fruits to tea, or trying more limited varieties like Chinese White tea or Pu-erh.

Researchers in the 1980s discovered health benefits in green tea (since shown to be present in black tea as well) stimulating a shift to green tea among Americans. In the 1980s traveling in Europe, one could rarely could find a place with iced tea on their menu, but now it is common. Even venerable coffee houses in Vienna now carry several varieties of tea, including green tea.

NOTE: For more information about the antique tea set and china above, see my original post. And for more photos and stories of artifacts/heirlooms, put “heirloom” in the search box on the right.