Discovering three instances of female ancestors running a boarding house, or at least renting rooms reminded me of staying in rooming houses when the family took road trips. And all of that made me think about how our cooking culture changes through the decades. And why boarding houses faded away with the advent of World War II. 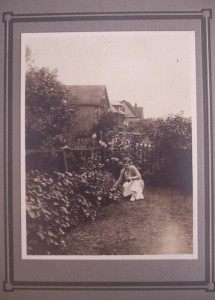 Maude Stout Bartlett in garden of her Buffalo Home where she rented a room.

There was a time in American history (late 1800’s through the Great Depression) when boarding houses and rooming houses were the prevalent place of relevance for unmarried men to live.  (Less frequently women).Generally they were run by widows or single women who had no other means of supporting themselves. 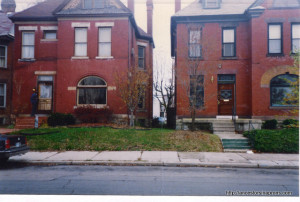 Franklin Avenue house (on the left) nearly 50 years after we lived there. You will notice the iron railing seen in picture below is missing from the front stoop.

Their life story would run like this–get married, move with their husband and children to a large house. Years pass. Husband dies, or deserts wife, or does not provide for her, perhaps older children move away, leaving her with no skills to support herself besides housekeeping and cooking (actually pretty considerable skills, but not particularly valued). It was only logical for her to turn that extra space in her house into an income-producer.

The occupation was looked upon as a last resort. Women would prefer not to have strangers in their homes. And opening a boarding house or rooming house was an admission that you had no other way of earning a living, so if the woman was previously a respected member of her community, she moved down a notch.

Boarding and rooming houses evolved into more temporary lodgings–as opposed to the semi-permanent homes of single men–the forerunners of today’s Bed and Breakfasts.  I remember my family seeking out respectable rooming houses when we took road trips. I can remember staying in spotlessly clean rooms with polished wood floors on second floors. It was just like visiting an elderly aunt. Very homey.

In scanning census records, I came across an entry in the 1925 census that surprised me.  Aunt Maude’s husband Carlos died in 1914. She may have given piano lessons, but I don’t know of any other means she had survive other than a pension or life insurance policy from Carlos. In 1925 another person was living in her home: Arthur C. Willets, 62, an American citizen originally from England. He worked for an advertising agency.

It must have been difficult for a woman who had once entertained a Queen to have to rent out a room.  I can’t imagine her cranking out meals every day. On the other hand, I’m sure she was proud to have an Englishman to whom she could serve tea and cookies instead of some country bumpkin.

Although in my memory, full of rich detail of that period, it seems that we lived on Franklin Avenue in Columbus for many years, I know that in fact we only lived there for a short time, between 1947 and the end of 1948. Clues that cement the time period: toward the end of that period, Mother took my brother and me to Killbuck to be with Grandmother Vera because she was ill, and I know that Mother learned she was pregnant with my sister while we lived in that Franklin Avenue house. However we had moved to another Columbus neighborhood by the time my sister was born in March, 1949.

Sometime during the time we lived at the Franklin Avenue house, mother and dad rented out rooms to one or two men. My father was traveling for his job and money was tight. Mother was used to earning money teaching school, but renting rooms was more practical. She later told me she was very frightened to be alone in the house with these men that she didn’t know.

The house would have made a perfect boarding house, however she did not cook meals for the lodgers. The house had a large kitchen and a big walk-in pantry. Even more intriguing to a young girl, it had a pass-through –like a secret compartment–from the kitchen to the sizeable dining room, through a portion of a built in china cabinet that filled one entire wall. With its back stairs from the kitchen to the 2nd floor maid’s room, the house reflected a different way of cooking and eating forty years before we lived there.

NOTE: After publishing this post, I was re-reading some of mother’s memories and learned that she and my father also rented out two rooms in a too-large house they lived in in New Philadelphia, Ohio when I was just a toddler. She said it was her favorite of all the houses she ever lived in.

Grandma Vera Stout Anderson and the Boarding House that Became a Restaurant. 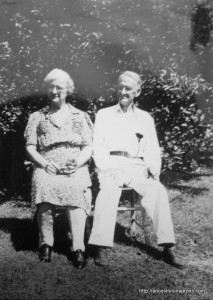 Vera and Guy Anderson, 1941 in Killbuck. Grandma’s swollen legs show the mark of long years on her feet in the kitchen. Grandpa wears a pocket-sized hearing aid.

I have talked a lot about the restaurant that my grandmother and grandfather Anderson ran out of their home in Killbuck, Ohio.  However, I just learned–again thanks to a census report–that the restaurant was preceded by a boarding house. Daddy Guy bounced from business to business after he left farming, so this was just one more.

In the 1930 census lists, along with Leonard Guy Anderson (Daddy Guy) and Vera M. Anderson,  my mother (23) and their son Herbert G. Anderson(21) and his wife and one-year-old son, also five men as lodgers. This makes perfect sense.  I can see how cooking for that many people might evolve into the idea of cooking for anyone who wanted to pay for a meal. Plus, with young men enlisting at the onset of World War II, the demand for rooms would have disappeared.

The same hearty fare that made up blue plate specials in the restaurant–meat loaf, beef stew, pot roast and pies of every variety–would have filled the table at the boarding house. When I think of Grandma Vera cooking for ten people every day, I realize how difficult it must have been for her in later years to adjust to being alone.

She did not leave recipes for these hearty main dishes, because she just knew how to make them, and any housewife worth her salt should know also. 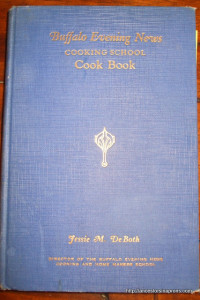 So I perused the Buffalo Evening News Cookbook (1925) for a look at what assumptions were being made about cooking during the 1930’s. It was, after all, tough times, and you had to stretch what little meat you had, although it was assumed that there would always be meat on the table. And bread and butter. And salt and pepper. So I turned to the “One Dish Meals” chapter of the Buffalo Evening News Cookbook and found a recipe that definitely sounded like something grandma would make, the salty ham a lovely contrast with the crusty skin on top,  potatoes creamy underneath.

One more note–in another twenty years, mushroom soup would have become the standard substitution for milk or cream in recipes like this, but I never liked it as much as the plain milk in my scalloped potatoes.

Cooking for the Boarding House
Recipe Type: Entree
Cuisine: American
Author: Vera Marie Badertscher
Ham and potatoes
Ingredients
Instructions
Notes
I’m sure that for ten people, Grandma would have doubled or tripled this recipe. She could easily have cooked a whole ham for Sunday dinner, and then used the leftover scraps to make this dish later in the week.[br]”Cook slowly until the potatoes are tender”in modern terms translates into 350 degree oven for one hour to 1- 1/2 hour, depending on type of potato.
3.2.1251