Today was to have been Grandma Vera’s day to go to New York City. However, my brother distracted me with an Internet search for historic houses, and the results are fascinating enough to share. 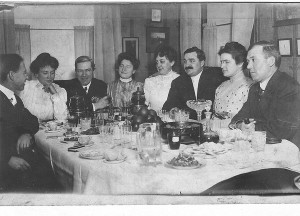 Great-Uncle Bill Stout and wife Jean at dinner party with friends, Benedicts and Yarnells at the Browns in NYC 1909

In a discussion of this Gilded Age dinner party featuring my great uncle William Morgan Stout (1873-1944) last week,  This picture of food sent me spiraling into memory. I mentioned three addresses of homes in New York connected to his life. What did I know about “Uncle Bill?” Not much, it turns out. I could deduce from his birth year that he probably finished college and went to New York for law school about 1893.  I know he was there in 1899 when Grandmother visited. And as far as I know, he died in NYC in 1944. So I had fifty years to fill in.

William Stout’s wife, Jean, identified the picture of the Stout’s dining with friends as being in the apartment of the Brown’s, 545 W. 138 Street.

My brother, one of the namesakes of the many Williams in the family, e-mailed me that he had found a picture of Uncle Bill’s historic house on line.  He did not say which of the houses.That sent me scurrying to Google to see what I could find. 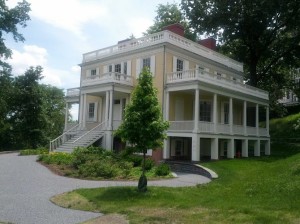 This address appears to have been very close to the intersection with Broadway, perhaps on the corner, on the west side of Manhattan island. 138th is 28 blocks north of the northern edge of Central Park.This part of Harlem a is called Hamilton Heights because Alexander Hamilton once lived in a woodsy estate there.  In 1909 it would have been a prestigious address because of the proximity to Broadway and the historic significance. (Today there are nearly 200 properties designated historic in the historic area between 140th and 145th.)

In the 1920’s the high-rent district Sugar Hill, farther north than 138th Street was the thriving home of the Harlem Renaissance.

… a delightful suburbia with rows of eclectic residences. The lively college campus of CCNY, the expansion of Columbia University and the Riverbank State Park bring Hamilton Heights to life. From the rusticity of Gothic buildings, to the smart Romanesque arches, to intricate terracotta details, there is a fusion of many architectural styles here. The serenity at the sloping parks and the cacophony in the street stalls incites one to spend the evening out exploring…. Once home to Alexander Hamilton, the neighborhood gets some fame because of its historical lure too.

But I am no closer to seeing what the building looked like where Bill and Jean Stout dined with the Brown’s in 1909.

In 1907, Bill Stout lived in this building, which is in Washington Heights, north of Hamilton Heights, near historic Ft. Washington in the borough of Manhattan. According to a real estate blurb in the New York Times archives, the building was sold that same year. The only description from that article is “5-story brick and brownstone apartment house” on a lot 25 x 99.10–so not a very large building.

The only other reference I could find to this street today,, was in a Q and A about real estate.  Someone asks, “How is 155th between Amsterdam and Broadway? …not as nice as Hamilton Heights below it. The answer is that 143-154th and 156-163rd are worse because 155th has a cemetery (i.e. open space) and school and elderly housing.

I once visited the Cloisters–a medieval museum in that neighborhood, little dreaming I was close to my Great Uncle’s former home.

So coming up empty again. 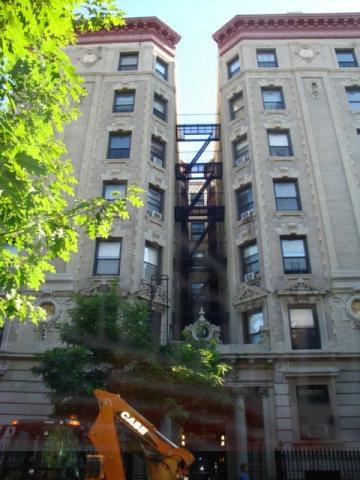 However, thanks to my brother’s sleuthing, we finally have something tangible with the address the family had for Uncle Bill. [After I wrote this article, I discovered that the address was on the back of a photograph of his mother taken about 1928.]

Another Harlem neighborhood, this one is located in the famous Sugar Hill area, so apparently William Stout lived there around the time of the Harlem Renaissance, which raises more questions. Would he have become a jazz afficiando? How interesting that he apparently did not joint the white flight from the area as blacks moved in.

Do you want to move into Uncle Bill’s building? You’re in luck. Several apartments are for sale in what is now a co-op building.  Although the real estate companies  list the construction date as 1910, another source says 1895, which makes more sense to me. That other source? The F.B.I.

Yes, this search got really interesting when I found a Google Book, F.B.I. Files on the Lindbergh Baby Kidnapping, ed. by Thomas Fensch (2001) While the  kidnapping of aviation hero Charles Lindbergh’s child in 1932 is a fascinating crime case that held the country riveted, I was more interested in a sidelight of the investigation.The F.B.I. questioned just about everybody in the 537 building, listed all the tenants “past and present” and helpfully described the building for me.  Since this investigation took place in mid-1930,I have no idea if William Stout still lived there, but nevertheless…

According to the FBI report, it was built in 1895 and tenanted by middle class citizens of many nationalities. They give the owner’s name, and details about the managers.

Their thorough investigation and focus on 537 W. 149th stemmed from the act that a man used the name J. J. Faulkner and gave the 149th Street address when he cashed some of the gold certificates paid in ransom money.  Although there were Faulkners in the building, the lengthy sleuthing in the end led nowhere–except to get me more information about Uncle Bill’s home.