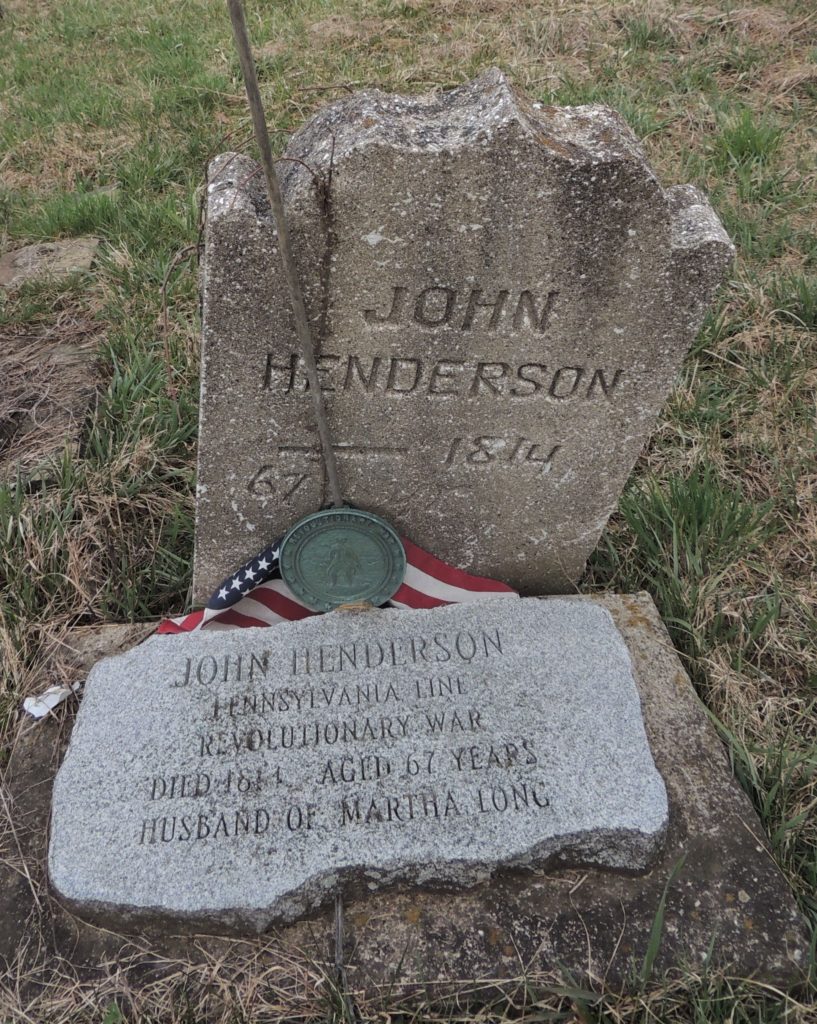 Note: I frequently warn that genealogical research is a work in progress.  Here is an example. No sooner did I hit publish on this post than I found more information that threw things into doubt. Most particularly, I am now not at all certain that John Henderson was born in Ireland. Like all these Scots Irish ancestors, it is really hard to determine how many generations moved from Scotland to Ireland.  It looks like it may be a long slog to find out just which John Henderson we are dealing with in order to pinpoint his father and siblings.

The tombstone provides death and through age at death, birth year information. It also claims he is a Revolutionary War veteran.  However, it is obvious that this stone is not from the actual time of his death, so who put it up? Did they have the correct information?

I am confident that I have the right John Henderson that connects to the will–but even there, I can add to what I wrote. I found more information–which I will share as soon as I get a readable image or a good transcription.  Turns out that Ancestry was holding out on me, publishing only the will.  The probate file also includes a list of monies owed and collectible and the home and farm inventory.  Because this was supposed to be a quick post, I did not search Family Search.org, which I will now do.  If they don’t have a digital copy, the information is copied on another Ancestry.com users page.

I should say, John Henderson provides one of the Irish Connections, since on my maternal grandmother’s side, once I start digging into her ancestors, the Irish roots show up consistently.  I always knew that on my maternal grandfather’s side, the Andersons, we have plenty of Scots Irish.  So far, it looks like those on the Anderson line came from Scotland rather than Ireland, but the McCabes and Fifes and perhaps Thompsons are proving rather elusive.

Until recently, I had overlooked the fact that my maternal grandmother’s line also yielded Irish blood. The Irish roots show up in the Cochrans, for instance. When my grandmother’s grandfather married Emmeline Cochran, however, it led me back to not only Cochrans but also Hendersons and even an Adams that seem to all come from Ireland. 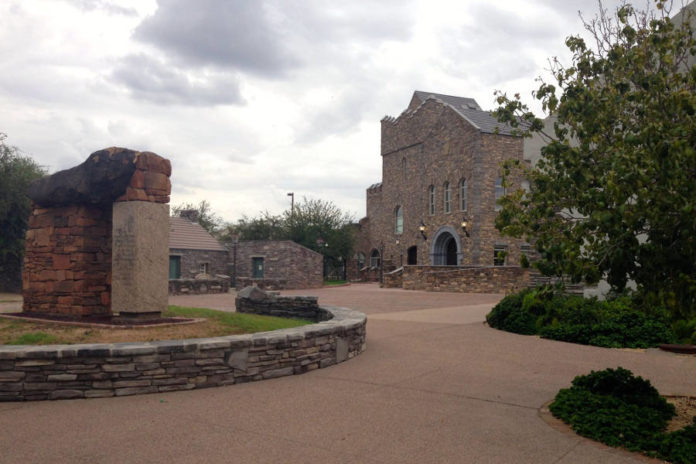 So why this sudden fascination with Irish ancestors?  I recently learned about a very special Irish Cultural Center and library in Phoenix, Arizona–just a two-hour drive from where I live.  Next week I’m going to visit there, and if I decided to track my Irish or Scots Irish ancestors, I can return to their library on a day when they have helpers available.  I’m excited about the trip, and so I started looking at the Cochrans and stumbled upon the fact that John Henderson, my fifth great-grandfather is from County Down in Ireland.

I have not had time to get an enormous amount of information about John and his wife Martha and their enormous family of ten children–but I did find his will, and figured I might as well share it.  Just to show that wills can be marvelous starting points for research.

John lived in Pennsylvania for a time and his oldest son, William was born there, but he moved to Belmont County, Ohio.

Note that Belmont County sits next door to Guernsey County where my Stout ancestors lived.  I have written about my great-grandfather Stout’s family quite frequently, starting with his father Isaiah.  I also wrote about Emmeline Cochran Stout, who leads me to HER great-grandfather, John Henderson. 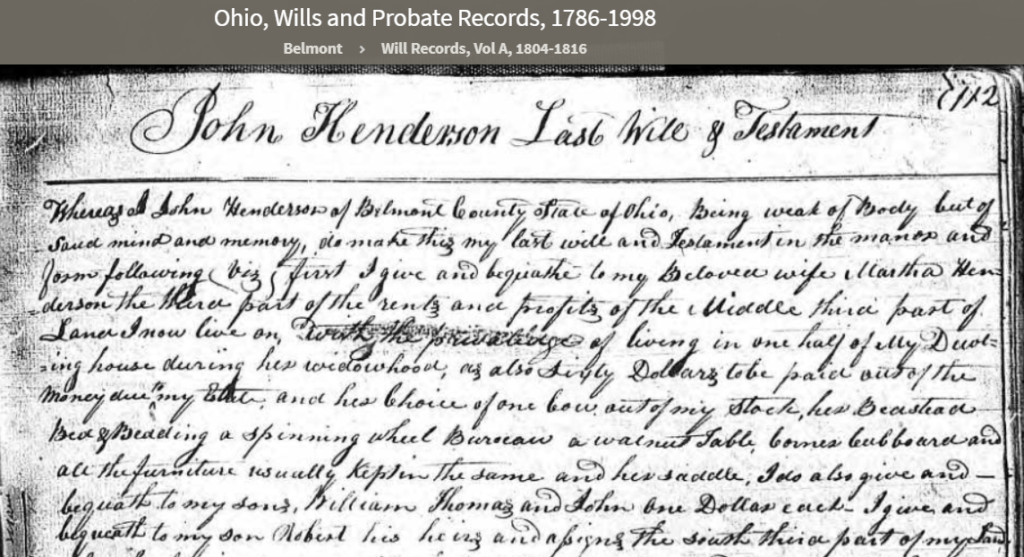 [I have separated parts of the will into paragraphs and added some punctuation to aid clarity. I also put the family names, in one mention, in bold, for clarity. It appears that the will was written by a clerk, including the signatures, so I am not showing the signature for Henderson.]

Whereas I, John Henderson of Belmont County, State of Ohio, being weak in body but of sound mind and memory, do make this my last will and testament in the manner and form following, viz. First, I give and bequeath to my beloved wife Martha Henderson the third part of the rents and profits at the middle third piece of land I now live on with the privilege of living in one-half of my dwelling house during her widowhood, viz. also sixty dollars to be paid out of the money due to my estates and her choice of one Cow out of my stock, her bedstead bed and bedding, a spinning wheel, bureau, a walnut table, corner cupboard and all the furniture usually kept in the same and her saddle.

I do also give and bequeath to my sons William, Thomas and John, one dollar each.

I give and bequeath to my son Robert his heirs and assigns the south third of my land where he has improved and he is to pay one hundred and ninety dollars in two years after my decease for the use of my daughters.

I also will and bequeath to my son David his heirs and assigns the north third part of my land where he has made an improvement. He is also to pay one hundred & thirty dollars two years after my decease for the use of my daughters.

I likewise will and bequeath to my son Andrew, the middle third part of my land and his heirs and assigns forever. The lines of each of the above mentioned places to stay as they are now run except two acres that is to (sic) much in my son David part which is to be taken from that part and given my son Andrew to be taken below the sugar crop across the bottom and I wish my son Andrew to work the 3rd part now given to him. For to enable him to do it he shall have the two horses and two pairs of gears and all other articles necessary for plowing.  One ax and one grubing (sic) hoe, two hilling hoes and he is to have the young bay mare, two years old this spring. And give up the other two when he comes of age which is to be sold and divided as the other moveable property and if he works the place he shall have the two thirds of the profit, the other two thirds to be equally divided between my beloved wife and my daughter Martha while Martha remain single. If she marries it shall be given to her mother and the said Andrew is to pay one hundred and ninety dollars three years after he comes of age for the use of my daughters.

I do also will and bequeath to my daughters Agnes, Sarah, Martha, and Margaret all the money due and owing to my estate that is not herein otherwise disposed of together with the five hundred and ten dollars to be paid by my three sons.  My daughters all to be made equal counting what they have got that is charged to them in the papers enclosed with what may be charged to them before my decease.

I do further devise that my moveable property not herein otherwise disposed to be sold by my executors and the third part thereof I give and bequeath to my beloved wife and the other two-thirds to be equally divided among y four daughters.

In witness whereof I have hereunto set my hand and seal this twenty-seventh day of May Eighteen hundred and fourteen.

Find a Grave and an application for the Sons of the American Revolution indicate he was born in 1747, so he is about 67 years old when he writes his will.  His wife Martha is 55.  I can speculate that he was married when Martha was 18 to 20, so they have been married 38-40 years and his oldest son, William (usually the children are listed in order of age) is about 40 years old in 1814. In fact, other sources say William was born in 1774 and Andrew in .

The will is only a starting point, and much more evidence is needed, but it gives plenty of clues for the search.

A Note on Sources

Find a Grave. https://www.findagrave.com/memorial/70178975 There is quite a bit of information on John Henderson and his wife, without documentation. I have written to the poster to ask for more detail.

U.S., Sons of the American Revolution Membership Applications, 1889-1970 accessed at Ancestry.com  While some applications for Sons of the American Revolution can be valuable, this one appears to have skipped a generation after John Henderson’s son. With an obvious error in another generation, the information on John and Martha cannot be taken as proof.

The following records indicate a John Henderson, and are consistent as well as located in Belmont County, Ohio, however I need more data to be sure they apply to the correct John Henderson.