Our very special treat today includes not only a journey to Holland, but a recipe for a traditional Dutch holiday treat–Oliebolen.  This guest post comes from an excellent writer whom I am proud to call my friend, Jane Eppinga.  Jane (full Dutch name Anna Jane Eppinga) has had many, many, many published books and articles to her name, so we are very fortunate to have her contribution to Ancestors in Aprons.

A few months ago, when I was talking about my Dutch family roots and discovering Dutch recipes like Hutspot, and uses for Gouda Cheese, Jane asked me if I had ever had Oliebolen. I had not. And that needed to be remedied! Here is Jane’s story and recipe. 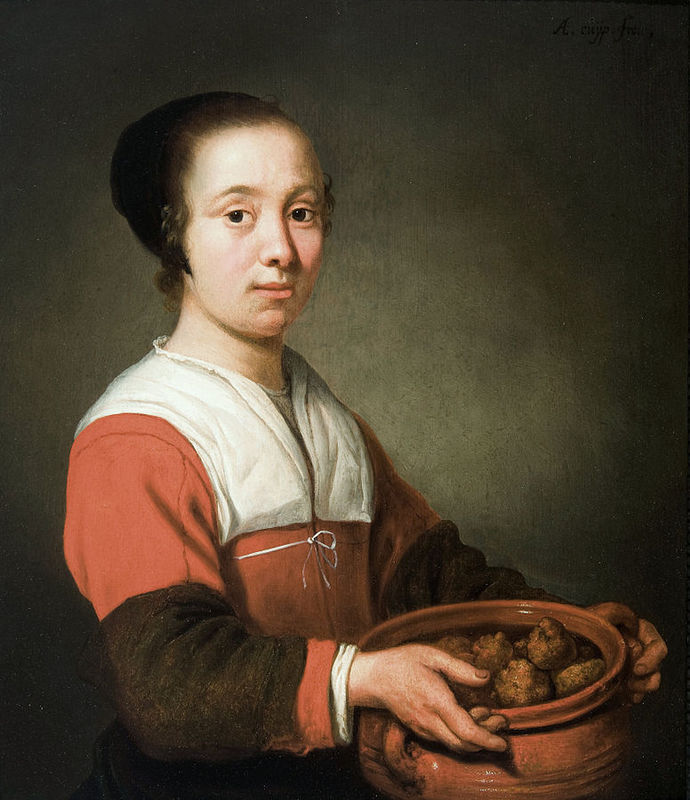 Oliebolen has its origins in pagan times. What? we weren’t always Dutch Reformed! The pagan goddess Perchta would fly through the air slashing her sword at anyone in her path. But because the villagers who ate Oliebolen had so much butter and oil in their system, her sword just slipped over them. So everyone started adding more butter and oil, the oliebolen tasted better and better and the Dutch got fatter and fatter.

You reach an age when you would like to take back these words. You realize that you are only a very small part of humanity, and have fewer years left than you have already misspent. It is a time when many begin to wonder about those who came before.

The Ones Who Came To America

Who were these people of mine — a great-grandfather with forty dollars, a wife and five children — cramped in third-class steerage with over two thousand other passengers?  The ship’s crew regarded them as little more than inconvenient cargo.

They were required to provide their own dishes and food, usually a gruel, for the rough six-week journey. Mothers rocked sick children with the roll of the waves in a boat that was little more than a precarious shell against the elements.

They arrived at Ellis Island, tired and frightened, but left for Michigan, Minnesota, Illinois, and Iowa, certified that they were not of indecent moral turpitude and showed no evidence of infectious diseases. They had made the journey to America. The men would renounce all allegiance to any foreign power, especially Queen Wilhelmina of Holland. They raised their right hands and in thick accents proudly swore allegiance to the United States of America.

Of all the things I didn’t like about being Dutch – funny names, strict parents, refrigerators in the bedroom, outdoor toilets, and living upstairs – two things always entranced me: windmills and donut holes.

Iowa windmills are not quite the same as Dutch windmills but their purpose is much the same. Climbing to the top platform when the blades were not turning provided a vast expansion of a child’s world.

My other happy remembrance was donut holes. On a lazy summer boring afternoon or a cold winter morning when I complained that there was nothing to do, mama would say, “How would you like to make donut holes?” Well of course I would. Who wouldn’t? I would help with sifting the flour and other duties that would make me a cook someday. Then she would take two large spoons, form a spoonful of dough and push it in the pan of hot oil. Each ball would sizzle for about two to three minutes and flop over of its own free will and mom would let it brown on the other side for a couple of minutes. Then we would lay them out on a cookie sheet and spread powdered sugar over them. After a goodly portion of donut holes were set aside for daddy when he came in from the fields, we would laugh as we popped delicious donut holes in our mouth.

I did not learn to make them again until I went to Holland and Minke Eppinga taught me just how to spoon the dough into a perfect ball and drop it into the oil. This was July and everyone who came into their house laughed because in Holland, Oliebolen or donut holes usually are a winter holiday treat.

I thought about the long journeys which women who were housewives and mothers, and the men who were farmers, laborers, tile diggers and millers made. 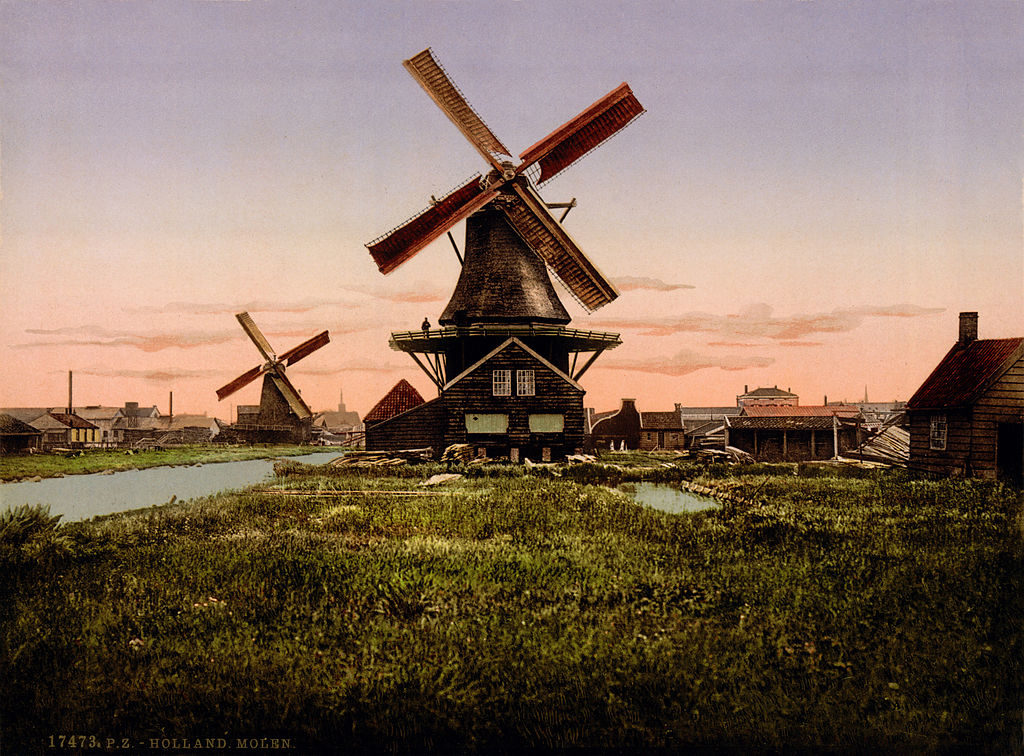 Centuries earlier, strange contraptions with sailcloth strips tied to the cross slats caught the wind, and the blades turned, first slowly and then faster and faster on the horizon. Pumping day and night, the windmills drained the sea water and hurled it across the dike into the ocean, reclaiming land. As the saying goes, God made the world but the Dutch made Holland. Still, there was not enough land and families journeyed to America to better themselves. Most never saw their homeland again. However, I would make their journey home.

Fewer than a thousand of Holland’s windmills still exist. With progress came electricity, pumps, and the demise of the mill. World War II bombs damaged and destroyed many windmills. The first windmills and wind rights had belonged to Dutch nobility. The miller leased the wind, and should a nobleman find himself a little short of cash, all he had to do was forbid home milling and force his tenants to pay for using his mill. Although these customs were abolished in the late 18th Century, wind rights still exist and no trees or houses may be placed close to a windmill where they can obstruct the wind.

When the Netherlands passed a law in 1693 declaring that all windmills had to have names, ordinary people found way of retaliating. Many mills already had nice names, but with the new law, they called their mills “fatty,” the “blind ass,” and a rope mill became the “Rotten Twine.”

Before long, windmill owners developed a windmill language. Windmill blades or wings set in a Roman cross meant rest for a short period. When set at forty-five degrees, mill work had stopped because of a problem such as foul water. A happy event such as the birth of a child is a “coming” with the wings set just before the vertical position. Wings set just past the vertical signified a “going” or a death. Evergreens on the wing tips indicated a religious holiday. Sails set in a confidential prearranged fashion let poachers know that a game warden had been sighted. Today if you see a blue pennant, it means you are welcome to visit this mill.

At the end of my journey to Holland, I could not help but look back at the large windmill standing near the ancestral Eppinga farm. Like a Dutch painting, my windmill disappeared into the soft misty Dutch landscape as we drove away. On my journey to my homeland, I learned something of my people, myself and a language written in the wind and I learned how to make donut holes. I also learned that whether reaching a certain age or crossing an ocean, it’s all about the journey. 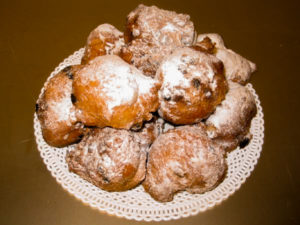 Jane says: Part of the fun of making oliebolen is watching them turn themselves over by themselves. (My note: making them a fun treat for kids to help with--as long as they know how to be careful with the hot oil).

Jane says: During the Christmas season and especially on New Year's Eve, every Dutch home has a platter of Oliebolen on the table.

My note: These will keep in a tightly covered container for 2 or 3 days. If you need to keep them longer, after they are completely cool, freeze them. You can keep them frozen for about 6 months.

My note: They are also popular in other Germanic countires like Austria.