I don’t mean to play favorites with my ancestors. Really I don’t.  But sometimes somebody surfaces that I just feel a strong connection with. Jane Morrow Cochran, a 4th great-aunt, is one of those.  Jane was the great- aunt of my great-great grandmother, Emeline Cochran Stout , the sister of Emeline’s father, Col. William Cochran.

How can you resist, when you find this description of Jane Morrow Cochran Moore?

“The old lady presided at the feast and was the life of the party, full of animation and joyousness for all her 84 years, telling stories of early times in Guernsey [county, Ohio] and talking of the old days in Cambridge [Ohio] and the people who are no more.”

Jane was born into that enormous family of  Alexander Cochran, the last of the children to be born before Alex moved everybody from Pennsylvania to Ohio Territory around 1802, so she surely grew up identifying more with Ohio than Pennsylvania and taking in stride the hard work of settlers in a raw forest land who built a farm and started toward civilization.  She was seven years younger than her brother, my direct ancestor Col. William Cochran.

We don’t know much about Jane’s life in Guernsey County, Ohio up until the age of 39 or 40, but about that time, she married Robert Bines Moore, who had fought in the War of 1812 at the age of 22. After the war he had married Catherine Brengle Comber, with whom he had (probably) nine or ten children. Catherine died, probably as a result of childbirth in 1839.  Their youngest child was born that year.

I have determined the identities of five of those children, but am not certain how many step-children Jane would actually be looking after. I do know that after Jane married Robert B. Moore, she had a son in 1843. At that time, I know that Moore’s children from his first marriage included Andrew (23),  J. G. (20), Elizabeth (18), Cyrus (7) and George W. (4). These names and ages are calculated from the 1860 census when George W., and R. A. (Robert Alexander) are still at home, and from information at Find a Grave.

On the 1840 “chicken scratch” census report from Guernsey County, Ohio, I can account for all of these children, and Jane as the wife, but there should also be a male child and a female child between 10 and 15 , and three females between 15 and 30. (Note on the 2nd image, that Alexander Cochran, Jane’s father was next door to Robert Bines Moore.) “Rob” Moore did not go far to find his second wife.

“Chicken Scratch” census 1840 for Robert B. Moore and Alexander Cochran

I have put question marks before those for whom I can find no documentation other than family trees.  Many list Maria (1832) based on the 1860 census, but as you will see below, she was not a child of Robert Bines Moore.

According to an entry at Find a Grave, in 1846, Robert Bines Moore, now a General, commanded a detachment of Ohio Volunteers who fought in the  U.S.-Mexican War to win California for the United States. [California and the Southwest were Mexican territory, ceded by the Spanish, when the war started in 1846. ] However, I cannot find him listed in a document purporting to list all soldiers and officers of the Mexican-American war. He is referred to as General in several mentions, including some papers filed with his will. 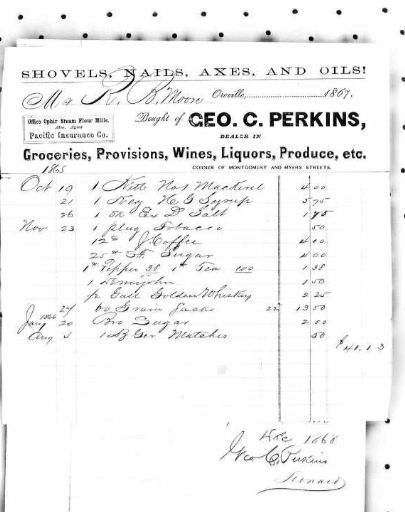 Whether he was in the war in California or not, he and Jane and the children , even those who were adults, moved to California some time before 1855. (Since he was elected to office in that year, it is probable that they moved a few years before.) This part of their life is so interesting, that I have decided to write a separate post about early California.

If the family trees who list Susan Gomber Moore and Thomas Moore as two more children are correct, those two were the first children to die.  Thomas would have been nineteen in 1845 and Susan would have been 25 in 1846 when they passed away, presumably in Ohio before the family moved to California.

The 1860 census  shows Maria Moore, widow of Moore’s oldest son (with his first wife) living with Jane and Robert Moore. Although this census does not specify relationships, Maria was a daughter-in-law. Maria’s husband Andrew Bines Moore had died at the age of 37, reportedly of pleuresy. The census was taken in June of 1860, and in the winter a epidemic of typhoid swept through their area.  Maria, who cared for others who were sick, according to one account, died of typhoid fever in December 1860. While I do not have proof that it was typhoid, Moore’s son Cyrus Parkinson Beatty Moore also died that year. He was just twenty-four years old.  A daughter Hariett listed in some family trees might have also died in the same year at 28 years old.

The 1860s continued to take its toll on the family when Elizabeth Moore, married to John Beal/Beale died in 1864, leaving a young daughter.  The daughter, Mary was living with Robert Alexander Campbell Moore in 1870.

In 1865, George Washington Moore, the youngest of General Moore’s children with his first wife, also died. It is possible that he was a soldier in the Civil War, but I have not tracked that down.

Then in 1866, General Moore himself wrote his will at the end of September and died on October 2.

He left  everything to his wife Jane and their son Robert Alexander Campbell Moore. In case R.A.C. Moore did not have children, there were some bequests to Catherine Green, his daughter and her husband, Dr. James Green and their children, as well as another Green in Guernsey County and a man in California.

“Everything” included the farm on the Fernandez Grant in Butte County, containing 1,363 acres, house and furniture, farm animals and equipment and the right to run the ferry. (see post on early California).

It is sad that of his eleven children, only Catharine, Jacob G. and Robert Alexander Campbell survived him.  Jacob (known as J.G.) was named as executor of the estate. Presumably he did not share in the inheritance because he was very well off in his own right.  He was a physician and owned a farm large enough to require four farmhands to run it.  Later he moved to San Francisco where the 1870 census shows that he had what was probably a political appointment in the customs house.  The fact that his personal worth was only $750 leads me to believe he may have lost money in some bad business deals. And why was he no longer practicing medicine? Mysteries for someone else to solve.

“General” Moore was buried in Hamilton, Butte County, California, but was honored in Guernsey County by another marker (cenotaph) at the Guernsey County Founder’s Cemetery. He was a pioneer in Ohio Territory and then in a California just emerging from Spanish rule–from haciendas to gold mining and modern developments.

Jane continued to run the farm for some time alone with R.A.C. living on the next farm over. But when she was 80, in 1880, she was living with her son Robert Alexander Moore and his wife on their farm near Hamilton California. (This of course could be the same farm that Robert’s father farmed, but I have not researched properties lines.)

Her 84th birthday is referred to in the quote at the beginning of this page. The party was attended by two children and and eight grandchildren. Another quote from the paper:

R. M. Green of Oroville was present and by one of the party who had recently been in Cambridge [Ohio] skillfully drew out “Aunt Jane” about the old inhabitants until she fairly excelled herself.

Jane passed away in 1886, after a life of pioneering, like her husband, in two states. 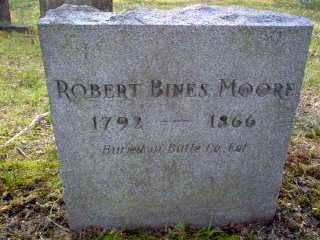 Photo of his headstone in the Founders Cemetery , Cambridge , Guernsey County , Ohio .
Was Taken By Carole Marie (McMahan) Selby