How can we talk about vintage cooking without Jell-O®? We can’t.

Moving from church suppers to bars and clubs,  Jell-O shows up in some unlikely places. And unlikely ingredients show up in Jell-O. Take the avocado for instance.

One summer when I was in high school, my family vacationed on a quiet lake in Vermont with a distinguished gentleman that my father worked with and his very artsy wife.  Mother was helping  the hostess get lunch, and the hostess asked if we liked avocados.  I looked at the green alligator-skinned fruit and  said, “I never had one.”

My mother was horrified. “Of COURSE you have had avocados,” she said. Laughing nervously, she turned to the hostess–“We have them all the time,” she added.

Hmmmm? All the time? I saw right away that I had made a social faux pas.  Mother was ever sensitive to social differences and eager to prove that she was as cultured and educated as anyone else, and here was her awkward, gangly teen daughter screwing up her facade.

Jell-O and avocado may not seem related. However, I remembered that incident when I got out one of the many product-oriented cooking booklets from yesteryear, The Joys of Jell-O. You can always tell when cookbook has been used a lot–stains all over it. 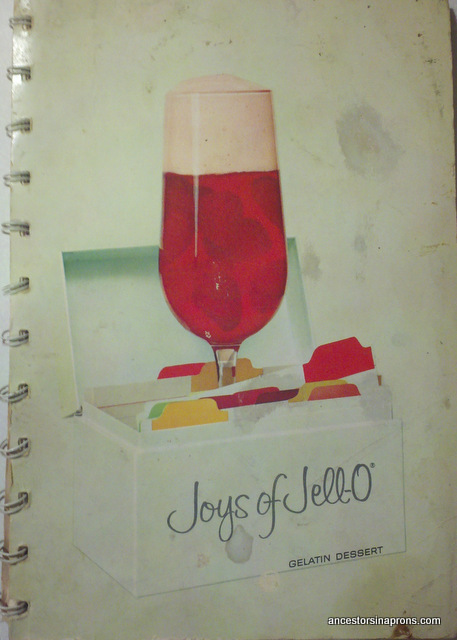 Joys of Jello cookbook, published by General Foods in 1963.

In the back of the book there is an address where you can send fifty cents and 3 box tops to get another copy. (I doubt that offer is still valid!).  This book is now selling on E-bay from $5.00 to $20.00.  Or you can get  The New Joys of Jell-O Brand: Gelatin Dessert Recipe Book

Because Jell-O was an essential in any cook’s repretoire when I was growing up, and because I once read that northeastern Ohioans ate more Jell-O per capita than any other region of the country, I had to bring you a few Jell-O recipes. By the way, Utah has more recently claimed the Jell-O consuming title, and made the jiggly stuff their official State Snack.

As I paged through The Joys of Jell-O, I noticed a couple of recipes with avocado. While that was not the most common Jell-O dish I remember–that would be fruit cocktail in strawberry Jello for dessert or grated cabbage and carrots in lime Jello for salad– I had some avocados and strawberries on hand–so avocado it would be.

Gelled desserts–aspics and meat jellies–had been fashionable since the middle ages, but when the packaged gelatin product appeared, it made those frou-frou creations easy enough for any housewife.  Then along came a fruit-flavored, brightly colored gelatin that eclipsed the old see-through colorless gels.

The history is interesting, since the original inventor wasn’t good at marketing and sold the product to high-school drop out Frank Woodward for $450.  Academic genius he wasn’t, but marketing genius he was, and in 1906 Jell-O (named by the wife of the original creator) took off.  Interestingly, the key to his success was a cookbook of Jell-O dishes, the ancestor of my Joys of Jello. Of course, it helped that electric refrigerators were coming into use to chill the Jell-O.

In the fifties, I remember some short-lived flavors of a different sort–savory flavors like celery and vegetable and Italian. 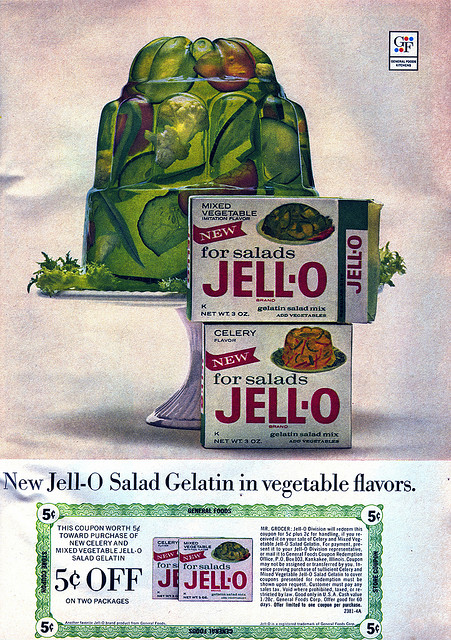 While the jello dishes that are still ubiquitous in middle America at reunions and funerals and church suppers are looked upon as rather plebeian by foodies, in the 21st century,  Jell-O has had a rebirth as a bad boy. The brightly colored, jiggly fun food has broken out of its former staid family dinner surroundings and now shows up in bars as Jell-O shots or in Jell-O wrestling. 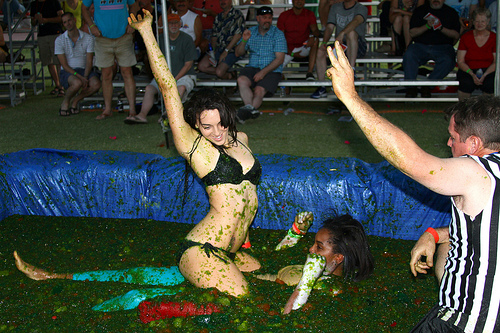 Oh dear, what would all those Church Supper Ladies say?

(If you want to try the Jell-O shots, here’s a bonus recipe just in time for  Hallowe’en– Candy Corn shooter made with Cointreau in orange peel molds.)

It has been decades since I’ve used the fancy Jell-o mold, but I never could bear to throw it away, so I dug it out from under the cake pans, and made Avocado Strawberry Ring. 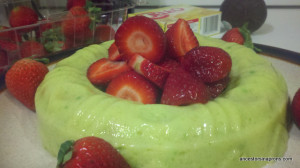 1. I beat the slightly firm jello, avocado and mayonnaise with an electric beater so that it would be slightly fluffy and smoother in texture.

2. The Joys of Jell-O book has helpful hints on things like unmolding.  Put the plate you'll use in the freezer briefly. Make sure the gelatin is firm.  Use a knife or your finger to pull the edge of the Jell-O away from the pan.  Moisten the top of the jello and the plate, with a fingertip dipped in water. (That will make it easier to slide, if you need to reposition it on the plate). Run warm water in a large pan or in the sink, just enough to dip the mold to within 1/4 inch of the top.  When you remove the mold from the refrigerator, hold it in the warm water for no more than ten seconds. Jiggle the mold slightly to loosen the edges. Get out the plate, turn it upside down on top of the mold and flip. Worked perfectly for me.