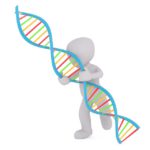 The bane of family searches is the recycling of names.  In my maternal grandfather Guy Anderson’s line, the overused names are John and Joe. What? It’s not bad enough that Anderson is a common name, you also have to call your kids John Joseph and Joseph John ad finitum?

Now that I have that off my chest, I’ll move on to today’s subject, Joseph J. Anderson (1848-1883) married to Mary Veolia Brink (1858-1932), my mother’s paternal grandparents. Joe Anderson accounts for both the Scotch and Irish blood in my veins (although it really all stems from Scotland). You’ll see how that ignites my travel desire in a minute.

Women seemed to keep the stories going about their mothers and grandmothers and I have no doubt many of those came through food and cooking, sewing and other acts of nurturing, so I have more stories about women in the family than men. And since Joe died very young, I’m left with few stories about him. He was only 36 years old when he died, which means Mary lived as a widow for 48 years.

On the other hand, official records favor research on male ancestors. Women tend to disappear as they change names at marriage. Of course in this case, Joe died when he was so young that there were not a lot of stories to tell.

In my earlier discussion of the fascinating Hattie Morgan Stout, I mentioned that Hattie taught at country schools at a very young age.  One of my mother’s (Harriette Anderson Kaser’s) stories goes like this:

There were evening gatherings for adults where the teachers taught  subjects like spelling, reading and music. Co-incidentally, our Grandpa Joe Anderson [my mother’s paternal grandfather] taught music and Grandma Hattie Morgan taught spelling.  Joe Anderson must have been a natural musician rather than a scholar, because his full time occupation was farming. Hattie laughed to Harriette, “I always thought he was awfully good looking, “but he was already pretty much in love with Mary Anderson.”

So there are a couple of clues to Joe Anderson.  He was handsome, and judging from his sons and grandsons, probably a charmer as well.  And he was a musician, so that may explain my Grandfather’s love of music and the community band.  How lovely that this man who worked on a farm, found an outlet for music, even though there may have been no community band for him to play in.

And then there’s the Robert Burns poem. Mary (Brink) Anderson, according to Harriette Kaser, said that the Scottish poet Robert Burns wrote his poem entitled Joe Anderson for her.   I looked it up and the poem is actually John Anderson, My Jo.  Since the poem has to do with a couple growing old together, which unfortunately was not the case for this Joe and his Mary, the poem definitely does not fit. But Mary must have been a romantic. Wikipedia has a different story about the origin of the poem, than the one you’ll find at that first link.

I have no pictures of great grandfather Joe Anderson, but Mary Anderson said that my mother’s brother Herbert looked just like him. So maybe he looked like this. 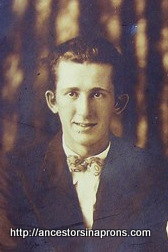 Herbert Anderson when he was twenty years old. Photo from another tree at Ancestry.com Thanks to K. H. Crissey

Joe Anderson was next to youngest of seven children of John Anderson of Pennsylvania (1797-1879) and his second wife, Isabella McCabe.  Most of the children were born in Pennsylvania, but Joe grew up on a farm in Monroe Township, Holmes County, Ohio, where his father had moved around 1840.  John Anderson started with 150 acres and grew the farm to 400 acres, and after their father’s death, the farm was managed by the youngest brother Frank.

Joe also had two older  half-sisters and a half-brother by John Anderson’s first wife.  As one of the youngest in this enormous brood, he no doubt got plenty of attention. 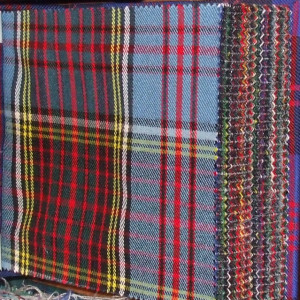 The Andersons came from Scotland, but I have so far not been able to pin down the exact time and the place they came from.  My sister and I visited a couple of Scottish kilt makers while we were in Nova Scotia and purchased some souvenirswith the Anderson clan plaid.

Joe’s mother accounts for the legitimacy of my wearing of the Green on St. Patrick’s day. Isabella’s McCabe’s grandfather was born in Ireland and immigrated in 1783. However, it turns out that back in the late middle ages, the McCabes were MacCabes who came to Ireland as mercenaries from the Island of Arran in Scotland. (I don’t think my mother knew that, but she always said we were Scotch-Irish on my grandfather’s side, and she was right.) Most of their territory would fall within what is now County Cavan in the far north of the Republic of Ireland. Ah, now THERE’s a couple of  lovely excuses for travel. 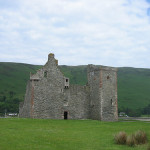 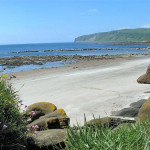 Shore on Isle of Arran, Photo by Lenny 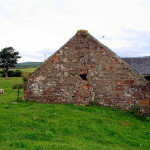 Abandoned farmhouse on the Isle of Arran Photo by Jocelyn Durstan

Joe and Mary V. Brink married January 7, 1877 , and his younger brother Frank married Mary’s sister Sarah Jane Brink.  (It was not uncommon in those days of large families in small towns for two sisters to marry two brothers.)  Joe and Mary V. had two sons–my grandfather Guy and his brother Bernard (Ben) Franklin Anderson– and a daughter who died as an infant.

When Joseph J. Anderson died in 1884, my (to-be) grandfather was only 5 years old, and he was taken in by a different Frank Anderson, brother to Joe.

The facts are sparse about Joseph J. Anderson, but at least he gives me an excuse to talk about my Scottish and Irish roots. I want to thank my cousin Herbert G. Anderson, son of the Herbert Anderson in the picture, for sharing his research into the Anderson history.

Do you find that you know more about your female forebears than your male ones? Or vice versa?

(Photos from the Isle of Arran come from Flikr and are used with a Creative Commons license. Thanks to the photographers for sharing.)