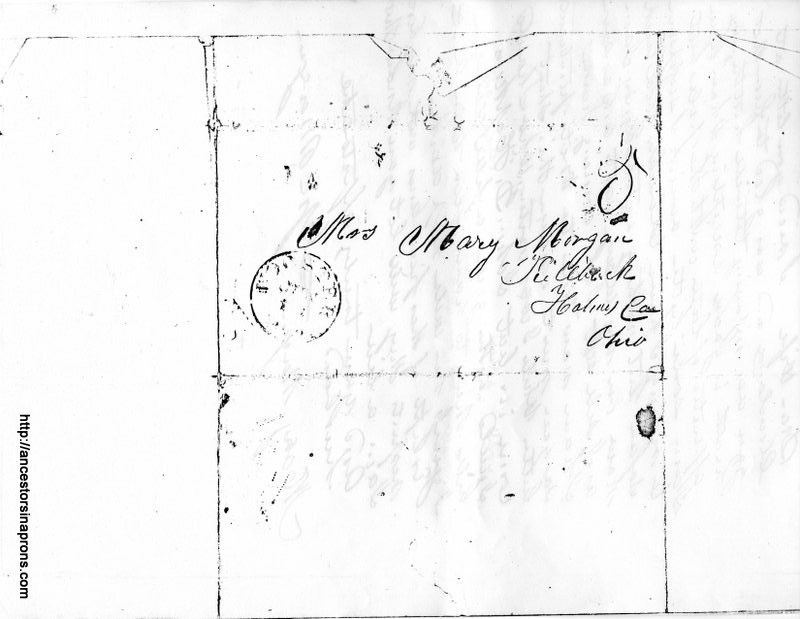 The Wooster postmark, impossible to read here, is barely visible in the photocopy and the original, but the postmark, on the back of the folded letter, was an important clue. The rushed letter does not state his location at the top as usual, just that he is “on his way East.”

See that blob of black that looks like an ink mark below the bottom fold? The wax used to seal the letter shut made that mark.

In this second letter of 1847, (you can read the April 1847 letter here) Jesse is once again in Wooster Ohio, just about 25 miles from home.  So close by today’s transportation standards, but more than a day’s journey for Jesse. It is possible he is passing through Wooster on his way  from Indiana, where he was headed when we last heard from him. He might be on his way back to New York state, where he winds up in August.

It is frustrating to try to figure out his schedule from these few letters. Obviously we do not have all the letters. And all of the letters that Mary wrote to him disappeared.  For instance, what am I to make of the fact that his letter to her at the end of April directed her to write to him at Akron, Ohio, but he opens this late June letter by thanking her for a letter he received at Cleveland, Ohio? It sounds like he might have been home between the April and June letters, and yet given the slowness of travel and the true snail’s pace of snail mail, it doesn’t seem possible that he traveled from Detroit to Ft. Wayne to Akron to Killbuck and then set off again somewhere that took him to Cleveland, and then back tracking or in a loop to Wooster Ohio.

I recd your letter at Cleveland and was glad to hear that you was enjoying tolerable health. My health is good excepting I have been afflicted of late with the piles but I am some better owing I suppose to riding.
I have tolerable good luck so far but nothing extraordinary. I am now on my way East and as soon as I sell out I am coming home.
I have now [no] time to write particulars so you must excuse this short letter.
While I was writing who should come in but John D. Hopkins. I would rather give a five dollar bill than to have seen him but guess he will keep dark.
Except [sic] of these few lines with my best respect. They will let you know that I am alive.

And your truly affectionate husband. 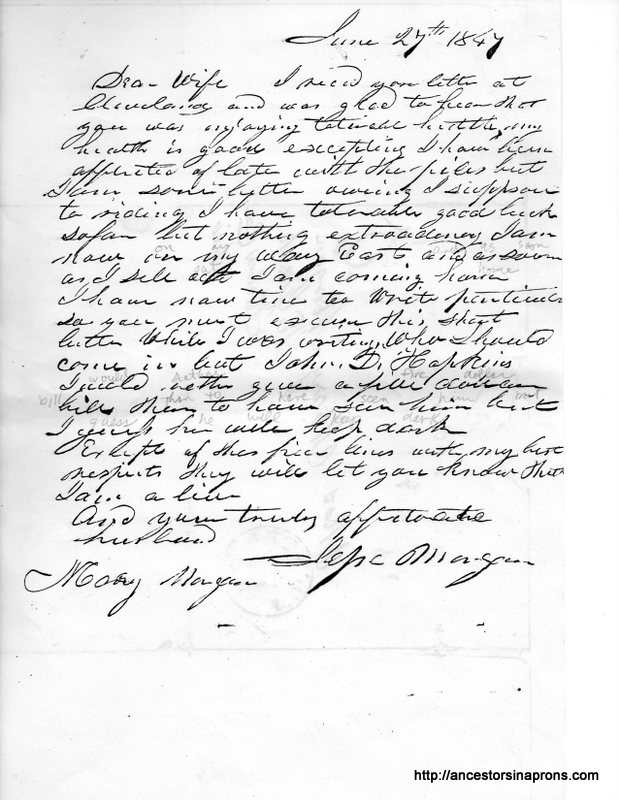 My, Jesse was really in a rush when he wrote this letter.  At least he wanted Mary to know he was alive, and engaged in the usual “how are you I am fine” convention. However, he gives us later readers a little too much information about his own health, don’t you agree?

Mary might have noticed that Jesse, for the first time in the saved letters, did not mention  little Harriet, my great-grandmother. She would now be just a month short of her 5th birthday. He also does not mention his four children from his first marriage. One of them (Malvinia) is definitely living with Mary, and one other may have been. But then, he has not mentioned them in any of his other letters either. Why does he seem to ignore these other children?

Mary would have known who John D. Hopkins was, and why Jesse was so appalled when he ran into him.  Later in this series, I will talk about the secondary characters in Jesse’s drama, and try to uncover more about John D. Hopkins. But for now, I just know that he was a farmer in Holmes County. A portrait of Hopkins posted on line by one of his descendants  looks a little scary. However, I have not discovered why Jesse was upset about seeing him in Wooster.

It was just a year before this letter that Jesse warned Mary not to tell everything to Mrs. Woods. That happened in Wooster, also. Although Mary might have understood this need for secrecy, it provides a fascinating puzzle for descendants reading their mail.

Jesse is vague about where he is going (East) and when he will be returning (when I sell out). That  may be to foil anyone who might be reading over his shoulder as he writes in a common room of an Inn or boarding house. Or may just be his usual excessive caution.  Is there something about being in Wooster that should be kept secret? Or is it the whole business of being a wandering horse trader that he wants to keep hidden?

In Jesse’s next letter to Mary, he becomes uncharacteristically pessimistic and even despondent.  Is he ready to throw in the towel?

Thanks for reading, and please sent me a note if you recognize any of the names mentioned here.  Also, I would be delighted if you would pass this blog’s link on to anyone who might be interested in following the stories here.