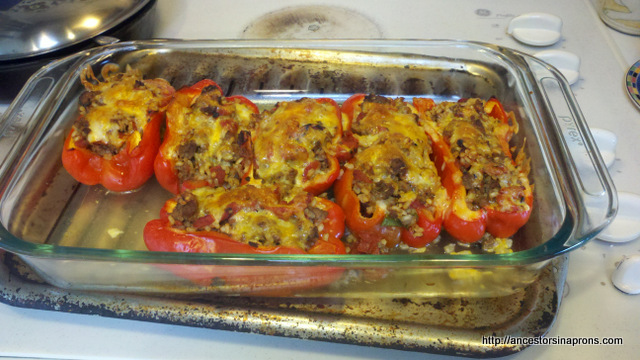 The U. S. Department of Agriculture has declared this week (2nd weeek in August) National Farmer’s Market Week. Every week is Farmer’s Market Week for me. I go to a farmer’s market almost every Sunday because I love fresh, locally grown vegetables and fruit. Sometimes, like when red bell peppers are on sale, I get inspired to make, or say, Harriette Kaser’s recipe for stuffed peppers.

Besides the displays are so beautiful, I feel like I’m walking through a museum of still lifes. 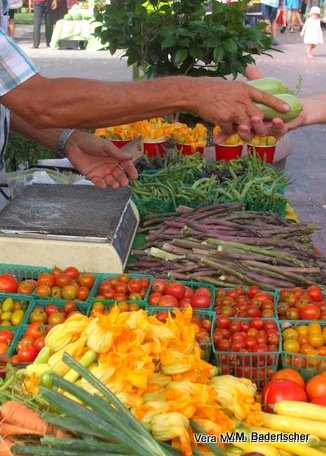 A rainbow of veggies from Dragoon, Arizona at the St. Philips’ Plaza Farmer’s Market in Tucson

I even take pictures of the stuff I bring home before I store it, because it looks so great. 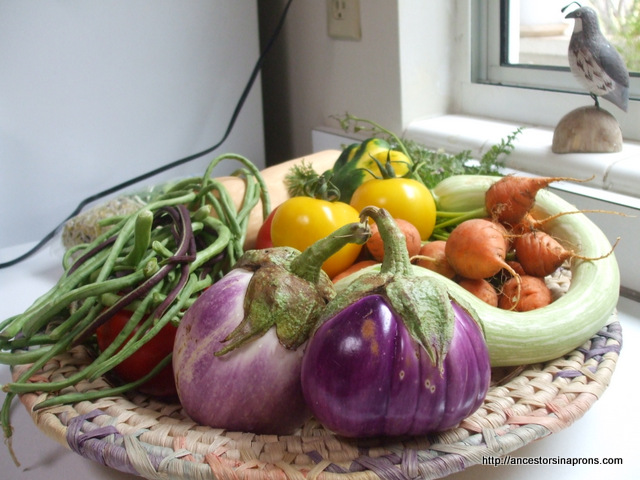 Do I have you in a vegetable frame of mind? And of course, like everything that has to do with food, these vegetables make me think of family.

Of course,most of my ancestors did not have to go to farmer’s markets because they had their own kitchen gardens. I mentioned that Mame Butts Kaser’s mother Ann Marie was known for her beautiful gardens, particularly the flowers.  When you drive the rural roads  of Ohio in the summer time, you’ll see neat garden patches beside every farm house.  And everyone plants flowers along with the vegetables. Ken’s mother, Agnes Badertscher grew a productive garden, but ringed it with flowers for cutting.  My grandmother, Vera Anderson did the same.  My father loved to plot a garden wherever he lived.

Farmer’s Markets are as old as agriculture, and indeed in many places in Europe were the reason that a town grew up. We can still go to wonderful farmer’s markets in Italy, France, England, Ireland and other countries our ancestors came from. So if you don’t have time or space to garden like your ancestors did, find your nearest farmer’s market. This Smithsonian article focuses on the history of farmer’s markets in our own country.

I wonder if the village of Clark Ohio, where so many of my Kaser ancestors lived, had a farmer’s market in the old days?  I wonder what my Kaser relatives raised in their gardens?  I’m sure they had gardens, because most of them were farmers and many stayed right there in Clark all their lives, living next door to each other. Did my great-grandmother Catherine Sampsel Kaser have a garden right up into her 80s? She lived a long life, near her children, according to census reports.

And did her family love a recipe for stuffed peppers as much as my father did? And did she call them mangoes? And why did Ohioans call bell peppers “mangoes” anyhow? 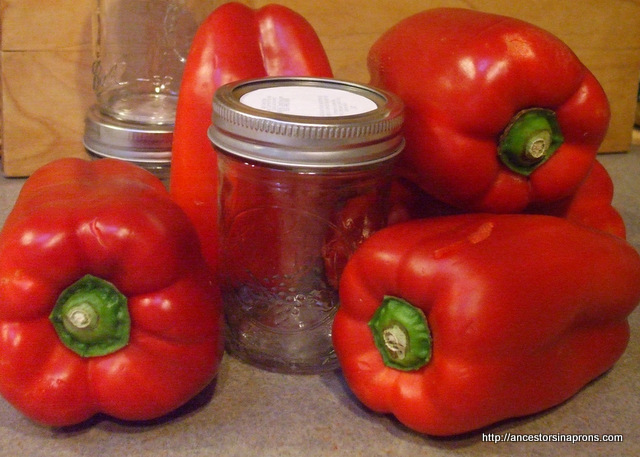 I might have better answers to these questions if I actually knew any of the Kaser relatives. Although my father’s father had six brothers and sisters, and I know of at least twenty Kaser cousins that my father might have met, and those cousins had lots of progeny, too, we weren’t in touch. More about that on Thursday when I try to find out why with all those cousins, my father didn’t seem connected to his extended family.

My mother, Harriette Anderson Kaser, had a recipe for stuffed green peppers, but I like to use red bell peppers when they are in abundance at the end of summer. (I can’t ALWAYS make Grandma Vera’s Red Pepper Jam.)

So one of the ways I changed my mother’s simple recipe for stuffed peppers is to trade red for green.  I’ll give you her recipe, but there are many ways you can make stuffed peppers.

I like the Greek version (Gemista), peppers or tomatoes stuffed with bulgur wheat, a few raisins and a touch of cinnamon and topped with feta cheese..  I also like stuffing them with other vegetables for a change from ground beef and rice.

I’m really not sure what mother seasoned her stuffed peppers with, but I added some oregano and garlic salt and cumin for seasoning, and some turmeric, because I sneak it into everything for its health benefits. 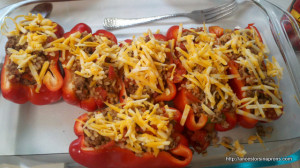 Mother's stuffed peppers change a bit in my version. A flexible recipe that can be vegetarian or Mediterranean, too.

It is best to use a lower-fat ground beef or pour off the accumulated grease after browning.

Although mother would have used white rice, I used brown. And certainly, if you have some leftover rice at hand--use that. She might also have substituted a crumb topping for the cheese, depending on what was at hand.

Seasonings are flexible according to your tastes. Recipe can be made with all vegetable stuffing or can turn into Greek Gemista with bulgur wheat stuffing seasoned with cinnamon and the addition of raisins and feta cheese.