Mary had been married to Jesse for only three years, and he was out galavanting around the country, riding on trains and steamboats, while she was left behind to take care of his two daughters from his first marriage, plus the baby Harriett (Hattie).

Now he had the gumption to tell her that she could not subscribe to her favorite (and only) magazine?? The nerve of that man! It was bad enough to be stuck in this small town without being cut off from a source of information about the larger world.

Mary Bassett was born in Keene New Hampshire, and when she was sixteen, her family traveled by horse and wagon to Ohio.  I always felt connected to Mary Bassett, because I knew from my mother and grandmother that she was a bookworm like me. It might have been hard for a young woman to leave behind the friends and familiar surroundings of New Hampshire, but I understood that as long as she had something to read, she would be all right.

She brought with her on that wagon a wooden chest –plain, but with beautifully mitered corners.  My Grandmother Vera Stout Anderson-Mary’s grand-daughter–let me look through the chest.  I loved going through the old clothes that my grandmother told me belonged to her mother and other ancestors. Some very old publications , including a home-bound set of Godey’s Lady’s Book lay in that chest. I told my grandmother that the only thing I wanted to inherit from her was that chest and its contents. And it sits in my entryway today. 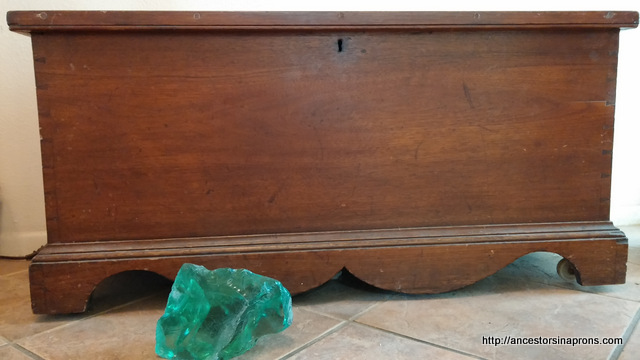 Mary Bassett’s chest traveled from New Hampshire to Keene Ohio on a wagon, and 140 years later from Ohio to Arizona on a moving van.

In 1826, the Bassetts joined a group of people from Keene New Hampshire who flocked to the new town of Keene, Ohio in Coshocton County. The people started several churches and the Keene Academy, a private school.

Mary was a teacher, apparently running her own school according to a mention in the History of Coshocton County. Mary grew up loving knowledge and admiring women who could take care of themselves, which would explain why as an adult, she loved Godey’s Lady’s Book.  When she was nineteen, she married a man, Ashiel Platt, who must have pleased her family very much, as he came from a religious family and had a good head for business. They had only one child, who died in infancy.

The couple moved to Holmes County, Ohio, but Ashiel Platt had land in Illinois as well as Ohio, and later in life, Mary discovered she was a substantial land owner. Unfortunately, Mr. Platt died when they had been married less than six years–around 1834. His will shows that he owned a general store in Killbuck.

Mary stayed in Killbuck, Ohio and eventually met her second husband, widower Jesse Morgan, whom she married in September, 1840 when she was thirty years old and he was thirty-five.  He brought  to the marriage two daughters, Malvina (1835) and Louise (1833).  My mother said that his two sons, Charles (1830) and Carlos (1832) stayed with relatives of his. Hattie and Jesse had one daughter together, Harriet (Hattie) Morgan born in August, 1842.  So in short order, Mary went from being alone to being the mother of three girls, and much of the time she was doing all the parenting of her “instant family.”  In 1842 the family consisted of a baby, a seven-year-old and a nine-year old.

Jesse started out as a school teacher, but took to the road, trading horses, and eventually I promise I will share with you the letters he sent Mary from the road. I wish I had pictures of a lot of my ancestors, but particularly Jesse. He must have been quite the charmer.  Next week, my brother has a story about Jesse that I think you’ll find intriguing. But for now, let’s just say that Jesse was not as successful at business as Mr. Platt.  Jesse’s income never seemed to meet his high hopes.

Mary took care of the children, and read the Bible and Godey’s Lady’s Book. Mary clipped some fashion plates from the magazine, which she probably used as a guide to make her own up-to-date clothing. 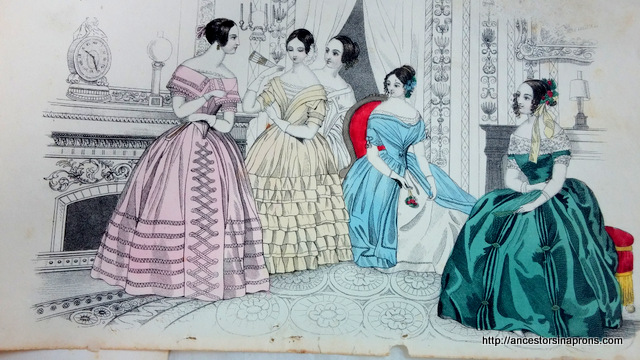 Fig. 1–Dress of Thibet merino with six tucks, the tucks braided. Down the front a large braided fold, confined on the under side.

Fig. 5–Dress of Turkish satin, laid in pleats or folds down the front–the folds caught at intervals with satin knots or clasps.  Neck and sleeves trimmed with deep rich lace, set on nearly plain, showing the pattern of the lace distinctly Head dress of broad satin ribbon, and flowers.

This fashion plate comes on the heels of a controversy. Mrs. Hale, the founder (with her husband) and editor of Godey’s Lady’s Book, had hired an artist to adapt the fashion plates that came from France so that they reflected a more healthy female figure with less constriction of the waist.  Some people apparently objected that this made the pictures meaningless as examples of French fashion. Her editorial in the January issue includes a letter from Harriet Beecher Stowe in support of the new editorial policy. Beecher Stowe says:

Only persuade our young ladies they can look pretty and be comfortable and healthy besides, and comfort and health may then become a matter of some little attention with them.

But Godey’s definitely was not all about fashion. It was mostly about uplifting literature, poetry, and even musical compositions. Edgar Allan Poe wrote for Godey’s several times. Unfortunately, not in 1843, the issues that I have. Mrs. Hale supported the Temperance movement, healthy living and later even women’s suffrage. Godey’s was a far cry from the women’s magazines of today–“Lose 10 pounds overnight.” “What celebrity is sleeping with her brother-in-law?” “Ten steps to more kissable lips.”

Meanwhile, Jesse’s letters to Mary gave some hints that all was not well with the family financially. And in November, 1845, he wrote a chatty letter from Illinois, near the Mississippi River, to update her on his travels. Apparently he had been away from home for two months and he did not have much encouraging to say. But she must have been stunned to read this:

It is my wish that you do not take the Ladies Book out of the office after Dec. No. comes.

In other words, “Cancel your subscription. We can’t afford the $3.00 per annum rate.”

Mary must have been despondent. But she was a virtuous woman and an obedient wife. So she cancelled the subscription.

How do I know it meant so much to her? Because she kept the 1843 issues of her Godey’s (the year after her child, Harriet was born) packed away with other precious items in the chest that accompanied her from New Hampshire.  She added book-binding to her considerable other skills, and hand sewed the copies together, covering the front with the January 1843 cover and the back with the December 1843 cover. 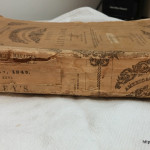 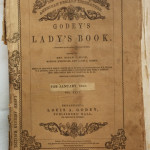 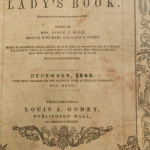 She tucked the whole thing away in the chest that held her most precious treasures, and there it has stayed for 170 years.

Mary lived on to survive Jesse and claim the lands that she inherited from Mr. Platt.  She supported her self and her daughter on the income from her properties until Harriet married Dr. William Stout in 1872. Then she lived alone in Killbuck until her death in August 1890, enjoying her three grandchildren, and probably never tempted to marry again.