My last post was about the short life of the  brother of my 7x great-grandmother, Martha Bent, of Sudbury, Massachusetts.  The cause of death was an accidental shooting by his oldest brother, Peter Bent. I can’t stop thinking about how it must have affected Peter, who at 46 was a real go-getter and successful businessman in that part of Massachusetts.

Peter Bent had been born in England and arrived in America in 1638 at the age of eleven.  He married at the age of 24 to a woman named Elizabeth (last name unknown). By the time he was 27, he was one of the young men of the village who felt hemmed in by the town of Sudbury.  His father and he joined other settlers of Sudbury in signing the petition to establish Marlborough. John Bent and his family, Peter Bent and his wife and son, Peter, Jr., moved into the wilderness west of Sudbury from which they would carve the town of Marlborough. The older men had this to say:

“God hath beene pleased to increase our children, which are now diverse of them grown to man’s estate; and wee, many of us, grown into years, so that wee should bee glad to see them settled before the Lord take us away from hence, as also God having given us some considerable quantity of cattle, so that wee are so straightened that we cannot so comfortably subsist as could be desired and some of us having taken some pains to view the country; wee have found a place which lyeth westward about eight miles from Sudbury which wee conceive might be comfortable for our subsistence . . .”
(From the book, History of Marlborough Massachusetts.)

This 1667 map of Marlborough shows the Sudbury River where Peter Bent built a toll bridge. CORRECTION: 10/2019: According to the Marlborough historian, Peter Brodeur, in an email, the bridge was actually built  nearer Sudbury. The colonial records of Marlborough indicate that Peter Bent built a bridge over the Sudbury River at Lanham.  This was located in Sudbury, not where you show on the Marlborough map.  It may seem curious that a bridge would be commissioned to be built out of town, but this was the case.  The reason was to provide a ‘shortcut’ to both Boston and points southeast.  The only other bridge across the Sudbury River was next to the old colonial town of Sudbury much to the north.

Peter Bent and his wife Elizabeth had a total of eight children, and all but one lived to adulthood, as I will explain below.

In 1660, as a valuable member of the new community of Marlboro, Peter built a grist mill on Stony Brook and the following year he built a bridge over the Sudbury River. These privately built bridges were a source of income for the builder, as he charged a toll.  Also in 1661, Peter and Elizabeth built a home “just south of Williams Pond, a mile from  the now center of Marlboro” according to the Bent Family History, published in 1900. 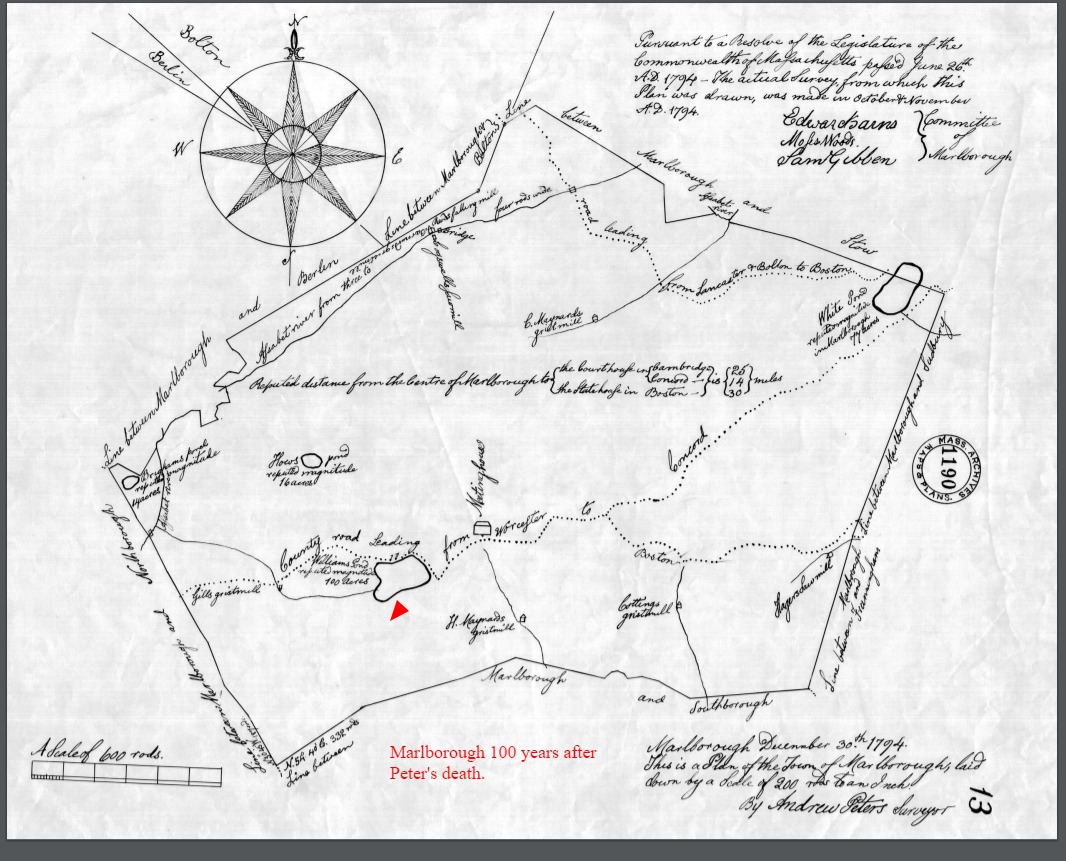 Marlborough map 100 years after Peter’s death shows location of Williams Pond where his house was located.

Creating a new town was not easy, as verified in a document presented on the Marlborough History page.  In 1664, after several years of squabbling over rules that sound amazingly similar to present day homeowner’s associations, half the town petitioned the court to form a committee to solve the problems.  Peter Bent, Sr. was among those on the opposite side. His half of the town did not think problems were serious enough to involve the court. [Correction October 2019:  It was Peter, Sr.’s son, Peter Jr. who was involved in the battle over the church.]

Forget all about our picture of a peaceful, cooperative group of people taming the wilderness!

In December of 1674, Peter Bent, Sr. wrote his will. Unlike most of the old wills I have found, illness did not suggest the necessity for a will. Instead, Peter was setting off on what was always a dangerous trip–sailing across the Atlantic to England. I have not found any record of why he went to Europe, but I know that several of the settlers had left lands behind in Penton-Grafton, Hampshire. Perhaps Peter’s father, John Bent, owned land and Peter was looking after it. Perhaps he was a trader, buying goods in England. Whatever it was was worth leaving his young family and going on this dangerous journey. At any rate, he survived that 1674 trip to old England, only to come back to chaos in New England.

The Bents and other families who had settled in Marlboro had just fourteen years to build their town before King Philip’s War broke out.  The Indian uprising terrorized Puritan villages in New England for most of  two years–1675 and 1676. The colonists knew trouble was brewing, and they fortified some of the homes in each village so they would have a place to take refuge. A document explains the allocation of garrisons and soldiers. Peter Bent’s house would be home to three soldiers of the thirty-seven allotted to the town, and his family would support those three soldiers. Men made sure to have weapons ready to defend their families.

In the summer of 1675 (probably in June), Peter walked or rode over to Sudbury to visit his brother Joseph and show him the pistols he had received from England. (I am speculating on the details here, but the sequence of events is accurate.)  Peter Bent was known to have traveled to England several times, and could well have purchased the pistols (which the inventory lists in his probate papers a few years later) on a trip he made in 1674.

Although we don’t know exactly how it happened, we know that Peter accidentally shot his brother that summer day in 1675.

I wonder if, when the Indians attacked his mill in November of that year,  Peter felt God was punishing him?  A small band of Indians crept up to his mill and carried off his apprentice, Christopher Muchin.  They also scalped Peter’s young son and left him for dead.  This “young son” could have been Zacheus, who would have been eight years old or John, twelve years old. The boy survived the attack.

Peter’s will refers to his son, Zacheus as “weak in body,” which might indicate lasting effects of the act and the Bent Family History author believes that is the case. However, John died five months later when he was only thirteen years old, which seems to me to point to John as the victim.

But that was just a hint of the horror to come in Marlboro and Sudbury.  On March 26, 1676, King Philip’s allies came into the village while everyone was at church on a Sunday morning and as the people of Marlborough sought protection in one of the fortified homes, the Indians burned most of the town to the ground. 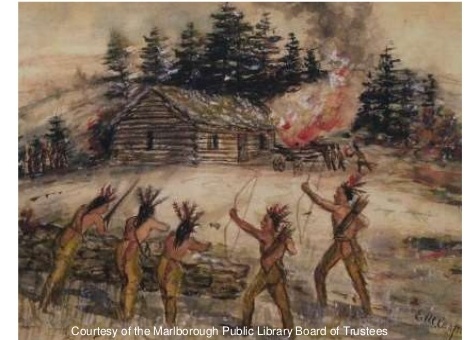 According to the Marlborough historical society this dramatic picture is not accurate. The church, with thatched roof, would have had plank siding rather than logs.

The following month, the Indians mounted an attack on neighboring Sudbury, where most of Peter’s relatives lived.

With no home, and with most of his livelihood destroyed, Peter took his family to Cambridge for refuge.  It was there that the young John died in 1676. The following year, 1677, the residents returned to Marlborough.

Peter lived only two years more, dying in 1678 at the age of 49.  He had taken another ship to England, perhaps trying to rebuild whatever business he had there to make up for the losses in Marlboro.  I wish I had more details about his business in England and the reason for his death.  Apparently he died in England rather than on the passage home.  At any rate, his will and the accompanying inventory provides a good deal of detail about the wealth he had been able to amass in his short life.

His will lists 26 acres of land around his home in Marlboro plus 25 acres of upland adjoining his former home in Sudbury and much other land, the total value: £436.  The inventory lists millstones and mill irons, and a pair of pistols, holsters and three swords.  His personal estate came to £40.

Despite all of this and the family around her, Peter’s wife Elizabeth asked for aid from the General Council, indicating she was destitute.  But in 1704, she still was holding the 1/3 of the estate that she got from the will and she deeded it over to her eldest son, Peter, Jr.

Part 1, pp. 1-43, is a study of emigration to New England in colonial times; part 2, pp. 45-207, lists passengers and the ships they arrived on (3,600 passengers on 213 ships). From the Custom House records of English ports. Much of the information is contained in nos. 7906 and 7907, Savage; nos. 1672 and 1674, Drake; and no. 3283, Hotten.
Bibliography:BANKS, CHARLES EDWARD. The Planters of the Commonwealth; a Study of the Emigrants and Emigration in Colonial Times: To Which Are Added Lists of Passengers to Boston and to the Bay Colony; the Ships which Brought Them; Their English Homes, and the Places of Their Settlement in Massachusetts, 1620-1640. Boston: Houghton Mifflin, 1930. Reprinted by Genealogical Publishing Co., Baltimore, 1961. Repr. 1984.

Maps shown are from this Marlborough Massachusetts website: https://www.marlborough-ma.gov/gis-mapping/pages/historical-maps