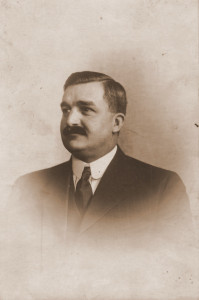 Since I have talked quite a bit about Vera Stout Anderson, I’ll start my ancestor tracking with her older brother, William Morgan Stout (1873-1944), known as Bill Stout or Will Stout.

My great-uncle carried the name of his father Doctor William Stout and his maternal grandfather, Jessie Morgan. One of these days I’ll tell you why it has always seemed very odd to me that Uncle Bill’s mother decided to give him the name Morgan.

The Gay Nineties in Manhattan

My favorite of all my ancestor pictures is this one from 1909 of Uncle Bill Stout and his wife Jean at a dinner party. 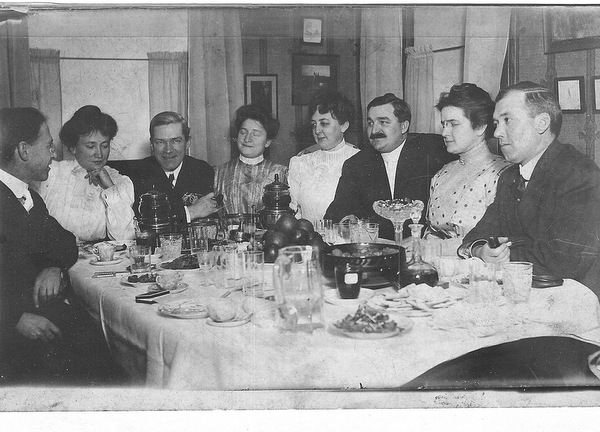 “Taken Jan 21-09 about 10:30 p.m. In dining Room of the Brown’s apartment 545 W 138 St.”  These notes were made on the back by Jean, bless her heart. She introduces the people from right to left as Brown, Yarnell, Bill, Benedict, Brown, Yarnell, Jean and Benedict.

So Jean is the pretty lady with her chin in her hand, and Bill is the guy with the heavy black mustache. I have great fun trying to figure out what they had for dinner, served up in all those lovely china and crystal dishes. Isn’t that a sherry decanter I see? And they are having after dinner coffee. Looks like someone on this end of the table didn’t eat his/her vegetables. What’s the guy on the right have in his hand? Is that a remote switch for the camera, or more likely a very fat cigar?

Uncle Bill Stout was born in Killbuck, Ohio, but lived in New York. Since he is the only member of the family who wound up in the big city, it is interesting to see how and why that happened. 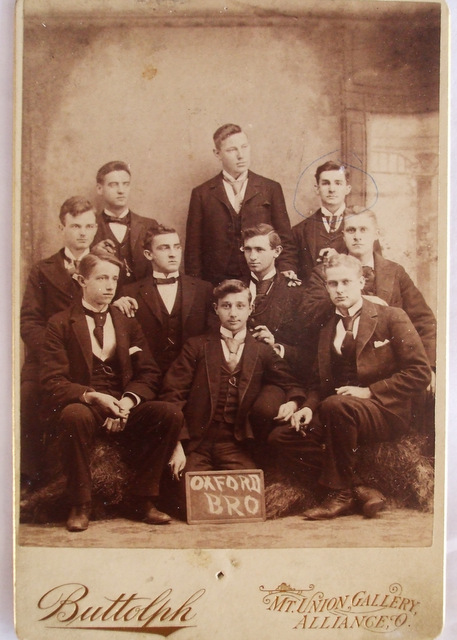 Here he is as a college student, at 18 years old at Mt. Union College in Alliance, Ohio. (And I’m NOT the one who drew a circle around his picture!) I’m sure that the family had high hopes for their only son, since papa was the town doctor and came from a family loaded with ambitious men. They included his uncle Frank Stout, an attorney in Omaha.

However, Bill Stout, it seems, liked to party. His father, a strict church goer and teetotaler, finally had enough and turned his back on Bill.

There is a family legend that a woman living in a nearby town, who was a bit of a Bohemian–an artist– took a fancy to the much younger man and decided to finance his law school education in New York. So off went Bill to law school.

Note:  UPDATE May 2017.  I have learned that Will apparently didn’t spend much time at Mt. Union, but instead in October 1895, he enrolled for four years of college at St. Lawrence University in the town of Canton in upstate New York.  In his freshman year (he was already twenty-two years old) he was selected as captain of the baseball team. In May 1899, he graduated with a Bachelor’s Degree in the College of Letters and Science.

Although he was listed with his parents in the 1900 Census in Killbuck, Ohio, under occupation, the entry was “at school.”  He must have enrolled in law school after graduating from St. Lawrence College because he graduated in 1900 from New York Law School. [UPDATE Aug 2018: Having found the marriage license for Will and Jennie “Jean” McClaren Rogers, widow, I know that he married right after he graduated in June 1900.] 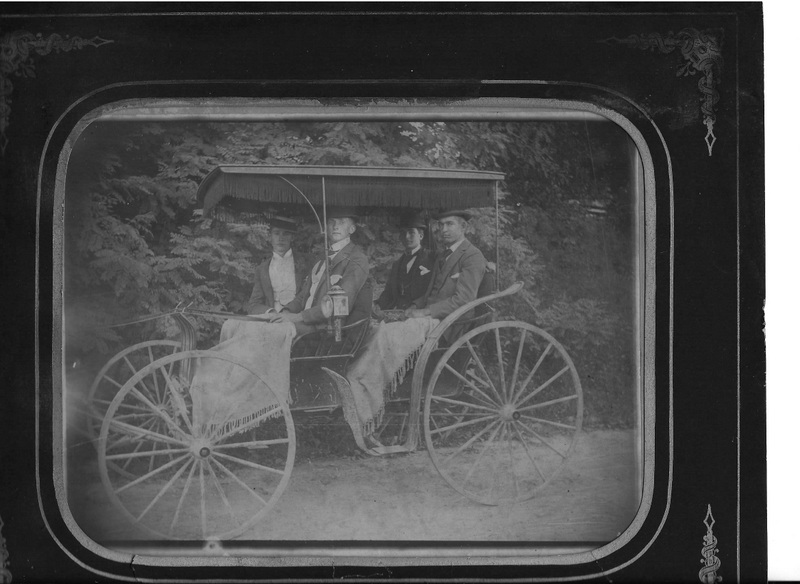 His obituary says he graduated in 1891, which cannot be correct. But he definitely was part of an exciting academic rebellion. Given the other things I have learned about Bill Stout, that would not surprise me in the least.

At some point around the time he was in law school, he met and married his wife Jean. UPDATE May 2018: They married in Oswegatchie, a town in the same county as St. Lawrence college on June 29, 1900.   The marriage record says that he was 20 and married, but  he would have been about to turn 27 and I do not believe he was married. Many details on the marriage record are incorrect spelling and wrong dates. Jean’s name is given as Jean Rogers (her previous husband’s name, and her father’s name is given as Mcfaren. That is another mistake. The 1870 and 1900 census confirms her name was McClaren.  Her age is incorrect, but she seemed to have a flexible view as to how old she was.  It turns out that she was actually 30 years and 4 months old when she married Bill Stout.

In 1900, the New York Census for Oswegatchie was taken on June 14, just two weeks before the marriage to Bill, so on the Census, she is a widow, living with her parents.

Jean had been married before and had one daughter, according to my mother’s oral history, and that was true. Her daughter was born in October 1893. Uncle Bill Stout adopted the daughter, who mother remembered was named Margaret and owned an antique store as an adult. I have no idea if she took the name Stout, but it would be interesting to find out more about that relationship.

UPDATE: May 2017 Bill never returned to Ohio to live. About 1906, he was hired by the Interborough Railroad (streetcar line) and according to his obituary he worked there for 34 years, until he retired in 1940.

The Stout family reconciled very quickly. Or at least his mother visited him in New York and I have a picture of her on a double-decker bus.  Not only that, but his mother and father sent my grandmother Vera to live with Bill in New York for a short time — and that’s another story.

Bill and Jean were big travelers, my mother said, and they would go through Killbuck, Ohio and visit from time to time, but if I ever met them, I was too young to remember. Since he and Jean had no children of their own, and the adopted daughter did not stay in touch with our family, I know very little about them, but from the sparkle in his eyes in his photographs, and the stories about his independent nature, I think I would have liked him very much.

I have not made a great effort to track William Morgan Stout’s life, but I do have a note in family archives that his address was 537 W. 149th Street in New York. (I don’t know at what time period, .[NOTE: Details, details. I have discovered the source for that address was the back of a photo of his mother taken in the late 1920’s. Looks like the photographers note to send him a copy, so he lived on 149th Street in the 1920’s. It is also the address on the letter he sent to his sister Vera in 1927. ]) I did a cursory search for on-line city directories and found W. Morgan Stout, lawyer, listed at 21 Park (that would be office) and in the same entry: home 461 W. 155th Street in 1907. I did find some more information and a picture. Read about it in 3 Historic Houses and a Kidnapping. In 1931 the Manhattan City Directory shows them living at 516 West 135th Street.

UPDATE: May 12, 2017  When Will retired in 1938, he and Jean moved from Manhattan to Farmingdale, New Jersey.  Since the Stout family’s first settlements were in New Jersey, there are still many, many Stout families there, and no doubt Will was in touch with some of his Stout relatives.  I’m happy that he had family around, but frustrated because I now have to wade through numerous William Stouts in order to find my great-uncle!

For a long time, I was frustrated that I could find no record of his death in New York or New Jersey. However, I finally discovered an obituary–in Palm Beach, Florida.  After three years in New Jersey, Will and Jean had moved to Palm Beach, a fashionable retreat for Easterners, and he died there in March 1944.  I also learned that he had been cremated, which explains the lack of tombstone.  I have yet to find a will (which I believe a lawyer would have had) or a death certificate. But I’m working on it.  The obituary says that his ashes were returned to Farmingdale. However, Jean, his wife, disappears from view, just as she is mostly invisible before their marriage.

Can you help with my ancestor tracking? I would love to know more about Jean and her daughter.

Since I don’t have first names for any of those people in the dinner picture, I’m hoping someone will see the picture and recognize someone. There’s a good chance that at least one of those men is a lawyer.

Do you have any ancestors who might have been acquainted with lawyer William Morgan Stout or the people he dined with in New York City, 1909?

Family photographs in the author’s possession.