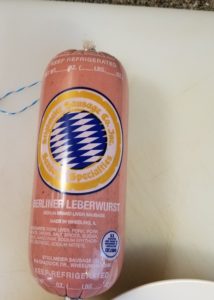 A whole roll of Berliner Leberwurst from Stiglmeier sausages in Illinois, and purchased at Dickman’s Deli in Tucson.

Introducing the fifth German sausage that I’m trying–Berliner Leberwurst (liverwurst).  An acquired taste for some people, I seemed to be born liking  liverwurst.   So if you run for the hills at the thought of this paté-like sausage, that’s perfectly okay with me.

Leberwurst serves more as a snack or appetizer than the centerpiece of a meal.  The soft sausage spreads nicely on a cracker or a piece of bread. 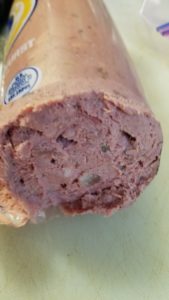 Leberwurst sausage holds the lead place among sausage favorites in Germany. Nearly ever region has its own version. And each of those versions will have slightly different ingredients–but always liver. But what, I wondered, is a BERLINER Leberwurst?  Obviously something that comes from Berlin, but besides that?  Turns out that while the sausage makers describe Berliner as having a milder taste,  the main difference comes in the texture.  While I am used to a very smooth, fine grind for leberwurst, the Berliner leberwurst comes with lumps and bumps.

In checking the Stiglmeier web site, I noticed that they also offer several other types of leberwurst, including a Bayerisch leberwurst that is smoother, finer than the Berliner version. The ancestors I have tracked to Germany so far, generally come from Bavaria, as do several of the German Sausages that I have featured here. Maybe that explains my preference for the smoother deli-style leberwurst, and I’ll be looking for that at my neighborhood butcher shop. 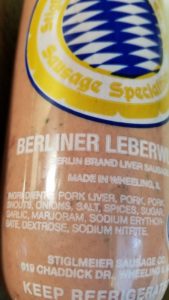 What is In the Sausage?

As we have seen with other sausages, “what is in the sausage” is sometimes a question better not asked.

The Stiglmeier company makes the coarse-ground sausage of

If you weren’t turned off by the thought of the paté- like texture, the ‘pork snouts’ in the ingredients ought to chase you away.

How to Eat Berliner Leberwurst

So if it is not a centerpiece of a meal, like knackwurst or bratwurst, how do you eat Berliner (or any other) leberwurst? 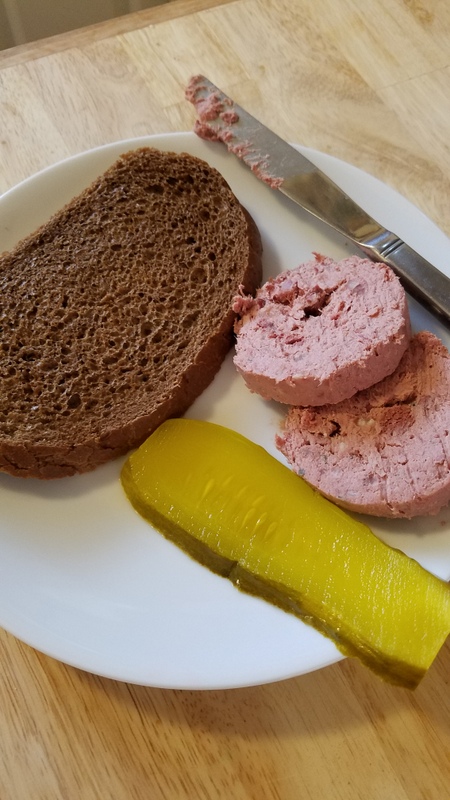 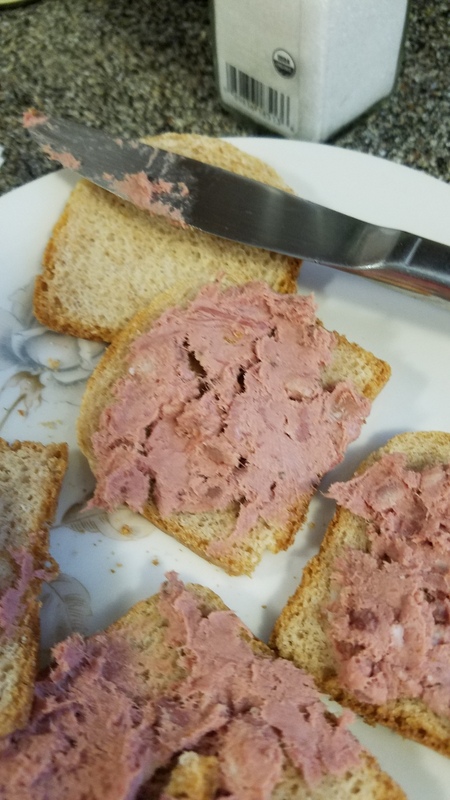 One thing is missing here–if I could, I’d add a large slice of sweet onion. I can’t eat onions but when I was young, I’d eat that combo as often as my mother bought leberwurst (also sometimes called braunschweiger).

Not as much as I liked the finer grind of liverwurst that I am used to.Those lumps you see in the picture are sometimes too hard to chew.

Want to Make Your Own?

This site has some interesting insights on the love of Germans for their leberwurst, and a recipe (no pig snouts required!)