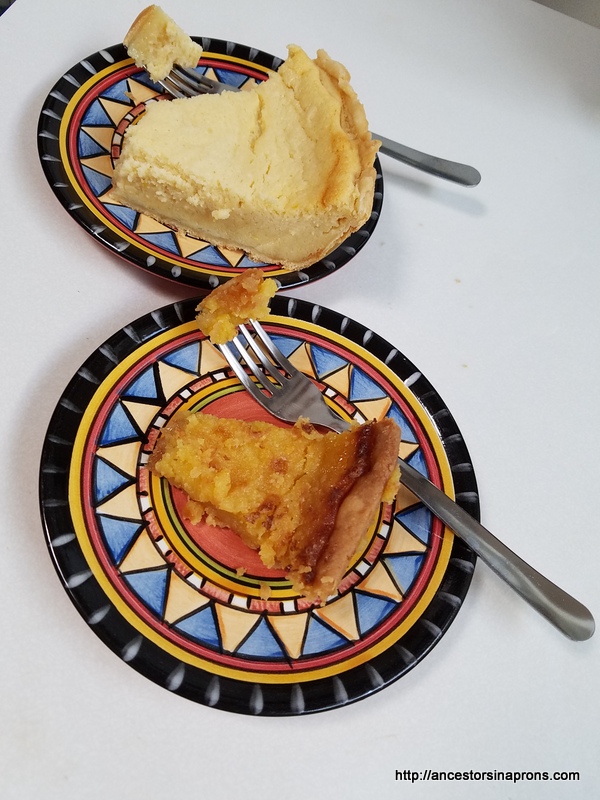 When a neighbor offered to let me pick as many lemons as I wanted from his lemon tree, I went a little crazy.  As I juiced those lemons on a 55-year-old electric  juicer, I pondered how I would use these lemons. I wanted to try something other than the standard custard lemon pie with meringue. The winners were: Lemon Bars, Lemon Chess pie, and Grandma Vera Anderson’s Lemon Sponge Pie. The two pies held a competition. By the way, I would have made my favorite lemon pie with whole slices of lemon rather than a custard filling. But these lemons were small, and seed-filled.  Not appropriate for that pie. So let the Bake-Off begin.

Read below the recipes what the taste-testers had to say. 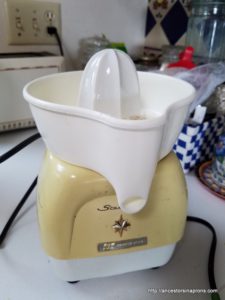 I got my electric juicer for a wedding present, and other than the fact that the strainer insert melted when it dropped onto the heating element in the dishwasher, the juicer is still kicking.  It is much easier than juicing by hand, and I have no need for those enormous juicers that are all the fashion now.

I wish I could find another one of these, just like the vintage version. (Gives me pause to realize something I have used personally all its life is now vintage.)

Both these recipes were made with my not-so-secret recipe for perfect pie crust, but with the chess pie the crust turned cumbly and more like a cookie crust. All that butter and those eggs. However, the pie dough was as easy as ever to make and manipulate. So if you haven’t tried it, take a look at the most popular recipe on this site–perfect pie crust.

In Joy of Cooking, I found a recipe for Chess Pie, followed by a version that makes it Lemon Chess Pie. It is described as having a “sparkling translucency and a smooth, soft, and melting texture.”   That wasn’t the way I saw it. It was translucent, but so sticky sweet I could only eat two bites. Others who ate it actually loved it, though.

Basic Chess Pie (without lemon) comes from the Southern states, where it is a staple. Although I searched and searched, I could find no definitive explanation of the name. Several theories, but no one knows for sure from whence came the name for this sweet Southern treat.  The Joy of Cooking recipe diverges from traditional Chess Pie recipes I found on line, particularly in the method of dotting butter on top instead of mixing it in. 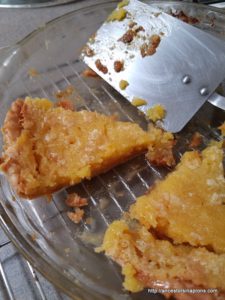 This recipe for Chess Pie from Joy of cooking is very rich. You will want to serve it in small slices.

Unfortunately, I have far too few recipes from my grandmother, but I have had this recipe for lemon sponge pie in my recipe box for years, and just never got around to trying it out. In checking for other versions of this pie, I found an identical recipe on line labeled as a traditional Amish recipe. I do not know where Grandma got the recipe, but the probable Amish source did not surprise me.  Killbuck, Ohio, where Grandma lived, lies in an area of Ohio settled by German and Amish immigrants,and familiar foods there tend to come from either England or Germany.

I doubled the recipe for my larger pie pan and got a bonus of two dishes of custard. I also reduced the sugar a bit, knowing that grandma had an insatiable sweet tooth.  I prefer to emphasize the lemon in lemon desserts.

When I make a dish with egg whites folded in, I always want to call all my friends and relatives to see it the moment it comes out of the oven. Because they beautiful pillowy effect is going to disappear in a minute. 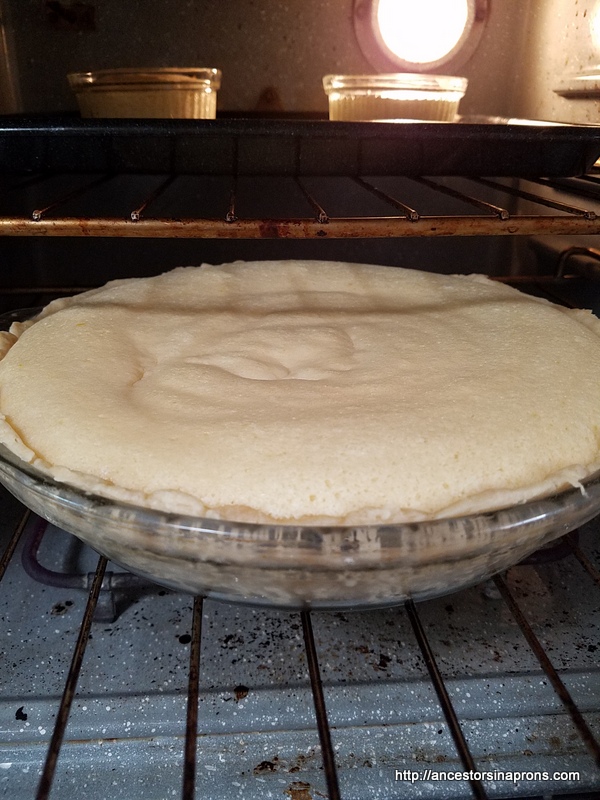 Pie and puddings at 15 minutes 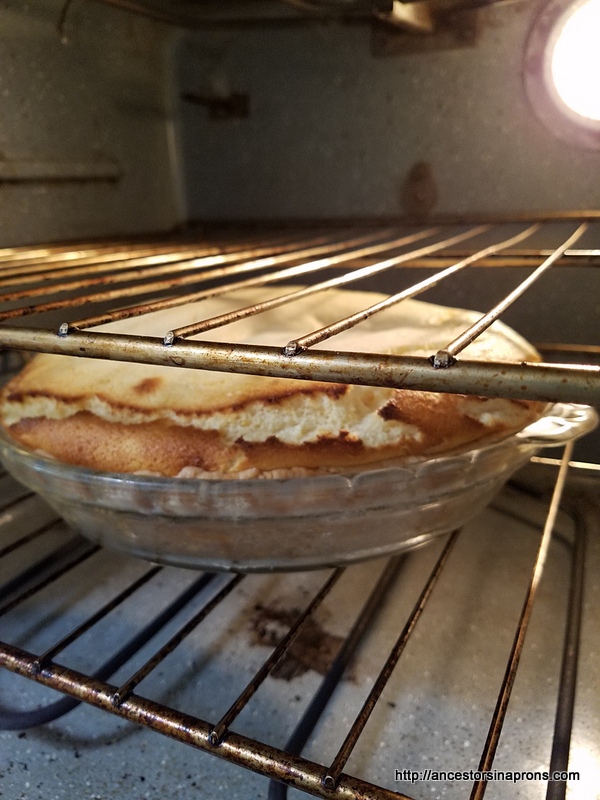 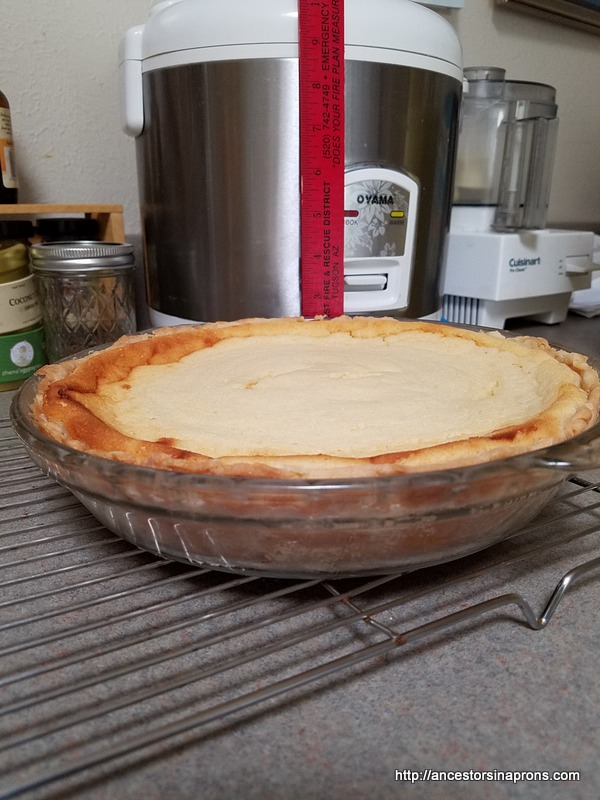 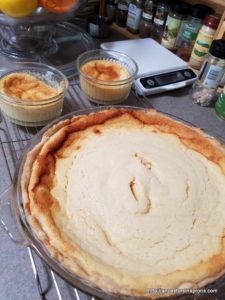 A vintage Lemon Sponge Pie from my grandmother's recipe.

The recipe as Grandma wrote it looked a bit small for my 9" pie pans, so I doubled the recipe. That way it yielded one large pie and two dessert dishes of custard. The only thing I did not double was the sugar. I like the lemon to shine through, so I used 1 1/2 cups of sugar instead of the full 2 cups. Your call.

Grandmother's instructions for making the pie were simply, "Cream together like cake. Add milk and fold in egg whites beaten stiff." I went into more detail than Grandma, just in case readers needed more help.

Grandma calls for "lemon peel", which we nowadays call lemon zest. That's what she meant--just the yellow part of the lemon peel, grated fine. I don't recall ever hearing the word "zest" in Ohio when I was growing up--it was always "lemon peel" and everyone knew that didn't include the bitter white lining of the peeling.

Don't be alarmed when the pie raises very high and then quickly sinks. That's the nature of the beast with puddings with so much beaten egg white.

The Votes Are In

Male #1: The sponge pie doesn’t taste lemony enough. It is not nearly as good as the other pie. The crust on the other pie was delicious. [As I mentioned above, it was actually the same crust on both pies, but  the ingredients made the Chess Pie crust more sugary.]

Female #1: The Sponge Pie sort of had the texture of a cheesecake, but lighter. But the Chess Pie was more lemony. I liked the crust of the Chess Pie–it was crispier and thinner. Definitely preferred the Chess Pie. It was like a Lemon Bar cookie.

Male #2: Definitely preferred the Chess Pie.  The crust was better and it tasted more strongly of lemons.  The texture of the Sponge Pie looked nice, but it was a let down after the Chess Pie. There really was no comparison.

Female #2: Preferred the Chess Pie.  Both were good, but I liked the calories (ha,ha) in the Chess pie. [the sweetness] The Sponge Pie had a tangy, lemony aftertaste which I enjoyed. The Sponge Pie was kind of like eating cheesecake, with a lemon flavor.

So there you have it. Sorry, Grandma Vera, I’m the only person who actually preferred your pie. I thought the Chess pie was cloyingly sweet (you would have loved it!). I would have preferred a stronger lemon flavor in the Sponge Pie but it would take some experimenting to see how to get that without messing up the texture.