Once when I was in high school, I was sitting on Grandma Vera’s glassed-in front porch in Killbuck Ohio, watching the town go by, when a tall, lean old man came walking down the alleyway between her house and the next one.

Grandma watched him and said quietly, “That’s the man I should have married.”  What a shock! Not just that there was a lost love in her life, but that she had a wistful tone. Grandma was not generally wistful.

Sometimes ancestor tracking leads to facts like dates and places. Sometimes it leads to puzzles about the facts. 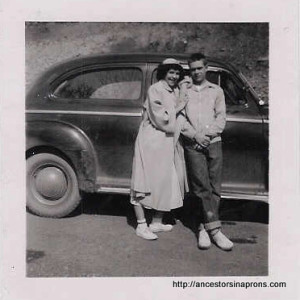 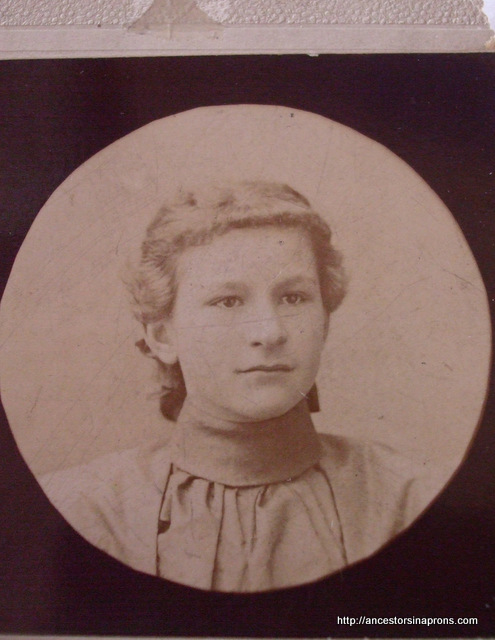 Vera Anderson 1899, the year she graduated from Killbuck High School

It happened after she graduated from high school. In May 1899, Vera had turned 18.

Dr. Stout and his wife “Hattie” Morgan Stout were great believers in education. “Hattie” had been a teacher and most of Dr. Stout’s brothers had advanced education.  Therefore they were active in insisting that a high school be established in Killbuck, and the first graduating class consisted of one girl, Vera May Stout, and one boy, Otto Welker.

By the time she graduated, she had fallen for a young man of the village of Killbuck and assumed that she would marry him.  However, the young man had a reputation of drinking a bit too much, and when her father, “Doc” Stout, learned about Vera’s intentions, he put his foot down.

He had already shown that he would not put up with someone who imbibed, having refused to pay for (Great Uncle Bill) William Morgan Stout’s attendance at law school because he thought his son was partying too much. When it came to Vera, his answer once again was to send his “straying” child away to school. By 1899, he had accepted William Stout’s success in New York, and decided Vera should go to New York City to stay with her brother and go to secretarial school.

She must have had very mixed feelings, since she adored her older brother, and loved to boldly seek new adventures, but she certainly did not want to leave the love of her life. On the other hand, her older sister Mary E. Stout (known as Maude, 1875-1963) had married Carlos Bartlett the year before. So staying in Killbuck would mean Vera would have to put up with their strict father and the constant comparisons to Maude, who had married a decent young man who was a lawyer for the railroads.

The complexities of family life included the fact that Vera was always questioning authority and Maude was the “good daughter”–studious, talented on the piano, and genteel–and was the clear favorite of their mother. On the other hand, Vera was just adequate at studies, preferring practical things and not a big reader, never mastered the piano and preferred to tell it like it was rather than “putting on airs.”

My grandmother never told me anything about that secretarial school, but since she never worked as a secretary, I have to assume it was not a good fit.  She did like to talk about being in Times Square at the turn of the century, as people rang in 1900. That was an event that stayed with her all her life.

And the rest of ‘all of her life’ was spent in and around Killbuck, Ohio, with travel as frequently as she could manage it. I’m not sure how long she remained in New York City, but in 1904, she married Guy Anderson (1878-1944) in Killbuck. The county newspaper announcement said with the hyperbole common of the period, “The groom is one of the most prosperous young farmers of Monroe township, while the bride is a talented and accomplished young lady and enjoys the high esteem of the best citizens of our neighboring village.” 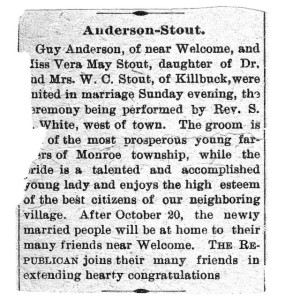 She was 23, and reluctant to take on the care of his two children from a previous marriage, so Guy’s brother Ben Anderson and his wife raised Rhema Anderson (Fair) and Telmar Anderson.

According to my mother’s [Harriette Anderson Kaser’s] recollection, Vera and Guy knew each other from school, but he was several years older than she. Mother also said that Guy taught school when he was younger, so perhaps he was a teacher when Vera was in school.

When they married, however, he ran a family farm outside of town, and she went from the glamorous life in the household of a New York lawyer to being a farm wife. In a new version of “How you going to keep them down on the farm after they’ve seen Paree?” Vera did not like it a bit. It wasn’t long until they moved back into town, where Grandpa Guy, who we called Daddy Guy, tried various jobs to support their quickly growing family.

The year after they were married Vera and Guy had a boy baby. One year later, Harriette was born, and two years after that the youngest son was born. Grandma Vera, in her plain-spoken way, said, “Every time he hung his pants on the bedpost, I had another baby.”

Interestingly, through my youth, I always dreamed of living in New York City for a few months–not permanently– I always said. Was I trying to relive Grandma Vera’s life? Although I obediently, and happily went through college,  I inherited her travel itch. And when I was married, I had three children in three years, just like Grandma. This ancestor tracking has made me realize how like some of our ancestors I am.

As we sat on her porch in the 1950’s, Vera gazed after the tall old man walking down the sidewalk, and mused, “He never was known to be drunk.” She never spoke again about her lost love.