It is absolutely amazing what you can learn from an ancestors will. I lucked out with the Manbeck family, finding wills for three successive generations.

In the 18th and 19th century it was unusual for a woman to make a will, since men always assumed the role of money manager (as we will see strongly in the next two wills we look at). But this is the will of Eve Manbeck, one of the sisters of Ken’s great-great-grandmother, and sheds some light on the Manbeck family. It also prompted me to look longer and harder at the information available on this third great-aunt of my husband, Ken Badertscher. 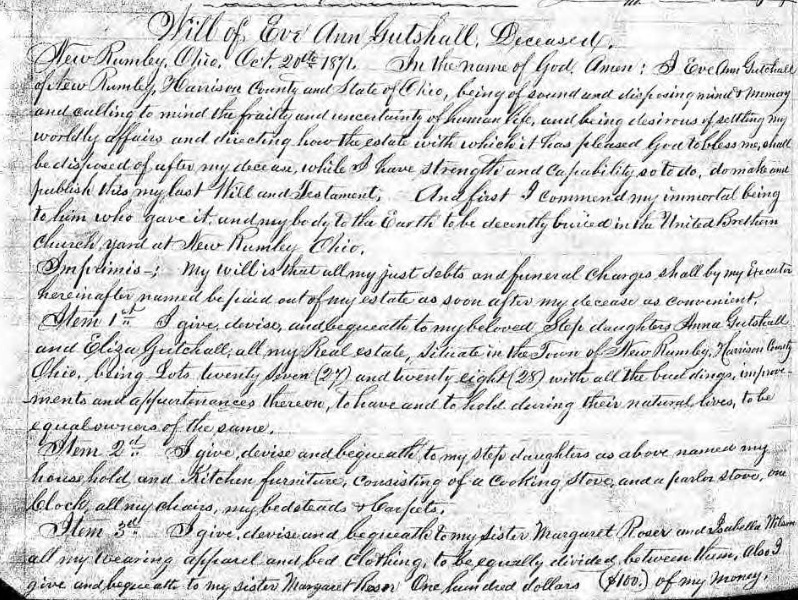 Eve (or Eva), named for her mother Eva Haslett Manbeck, was born in Pennsylvania in 1806, before her father Jacob Manbeck moved the family to Ohio.  She was about ten years old when the family made that move, and her sister Margaret was just two years old. I can imagine her caring for her little sister, since her mother had her hands full with a family of nine (soon to be eleven). When the tenth child was born, Eve probably was a caretaker for him–George–as well.

I paid more attention to the proximity of Eve, Margaret and George, and thought about the chaos of moving such a large family from one state to another, after I read her will. Although all but one of her siblings were still living when Eve drew up her will in 1871, she leaves bequests only to George and Margaret among her nine surviving brothers and sisters. She also includes Margaret’s daughter and two of her own step daughters.

As I put together a timeline of Eve’s life, trying to understand why she chose the legatees that she chose, it became clear that hers was a life that had been haunted even more than usual for that time by death.

In the last half of the 1830s, her sister Margaret marries Eli Roser. (Eve, still single, would have been in her thirties.)  Soon after 1842, Eve marries Joseph Gutshall.  Joseph’s 42-year-old wife had died in 1842, leaving Joseph with six children still at home plus two older sons.  But soon the first tragedy strikes, and Joseph’s two oldest sons, Jeremiah and Solomon, die in 1848 and 1849. Jeremiah’s cause of death is listed as Bilious Fever. (Bilious fever is a not-too-helpful term applied to any disease consisting of high fever, diarrhea and vomiting.  It could have been typhoid fever, cholera, or malaria, for example.)

In 1850, Eve’s beloved sister Margaret loses her husband, who is only thirty-eight years old. Margaret is left with two children, son Benjamin and daughter Susan Isabella.

In 1857, their brother Benjamin dies in Iowa. (He had married a woman named Gutshall–possibly a sister of Eve’s husband.)

In 1859, a typhoid epidemic sweeps through Ohio, and takes three Gutshalls. One is an infant girl, May, whose parents I have yet to identify, but one is the 26-year-old unmarried Hannah Gutshall, daughter of Joseph (and therefore Eve’s step-daughter). It is not hard to imagine many other people sick, and Eve, ever the caretaker, playing the role of nurse. Hannah died in August, and capping that terrible summer, in September, Joseph Gutshall, Eve’s husband dies as well.

Five years later, Eve’s sister Margaret is grieving the death of her son Benjamin, who was just 18 years old.

This litany of death explains to some degree the choices that Eve made, and even why she made a will at all.

After the formal preamble, Eve lists the following bequests. (I have simplified the language)

Item 1- To my beloved Step-daughters Anna Gutshall and Eliza Gutshall, all my real estate in the town of New Rumley, which consists of lots 27 and 28 with all buildings and appurtenances.

Note;  In 1860  Anna is still living with Eve. She marries John Epley in 1880, but he dies before ten years have gone by. Eliza never married, and worked as a domestic. After Eve died, three Gutshall sisters lived together–Anna and Eliza, listed as housekeepers and Rebecca, now married with a small child who is listed as a seamstress before her marriage in 1880. (I have not figured out where Rebecca’s husband is.) Anna and Eliza continue to live together the rest of their lives after Anna’s husband dies.

As mentioned above, Isabella is the daughter of Margaret, and Margaret must have been Eva’s favorite sister.  Because her husband died in 1850, Margaret may have been having a hard time making ends meet, which would explain the bequest of $100. 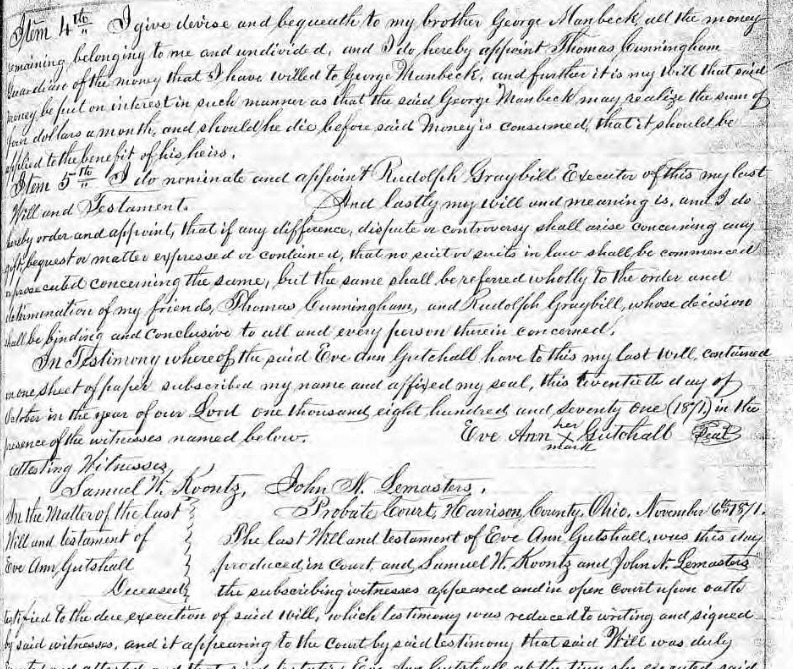 Item 4- to brother George Manbeck–all the money remaining and I appoint Thomas Cunningham guardian of the money that I have willed to George Manbeck. It should be invested so George will get $4 a month and if he dies before the money is consumed, it is to go to his heirs.

This is the final bequest and Eve has left out most of her brothers and sisters and step-children. Why George? Even though I explained why she might feel close to George–as we saw when I wrote about the Manbeck family--he was late to marry and settle down and not particularly successful at any particular venture. The 1970 census holds the clue as to why his life pattern was what it was, and why Eve cares so much for him, and why there needs to be a guardian even though he is fifty years old.

George cannot read or write, is married, and has four children between 5 and 12 years old. The census lists him as an “Idiot” and says his right to vote is suspended for some reason. “Male Citizen of U.S. of 21 years and upwards whose right to vote is denied or abridged on other grounds than rebellion or other crime.” Further, Census Agriculture reports show that he is living on a few acres and has only a pig and a cow and a few acres of corn and some fruit trees–not enough to make a living.

Item 5 – Eve appoints her neighbor, a school teacher, Rudolph Graybill as the Executor.

The final surprise of the will comes when I notice that Eve has “made her mark” rather than signed for herself.

It is not a particular surprise that she did not get schooling.  Among the German immigrants, boy’s education was more important than girls, and even that took second place to farm work.  Although none of the census reports admitted that she could not read and write, she is obviously illiterate.  I can’t help thinking how brave she had to be to cope with all the business of the farm, her husband’s death, and then making her own will, without being able to read or write.