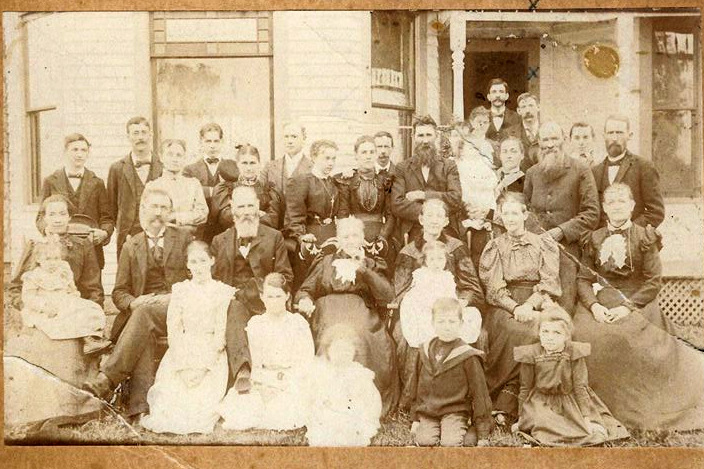 The Early Years in Pennsylvania

Emma Allison, first wife of John Anderson, gave birth to Sarah Jane Anderson on their farm in Washington County in western Pennsylvania in mid summer-July 9, 1833. Baby Sarah had a brother, Erasmus, three years old when she was born, and three years after she was born younger brother John came along.  However, the next year, her mother died.  Sarah probably did not remember much about her mother, because Emma died when Sarah was only four years old.

[NOTE:  Some family trees name an older sister of Erasmus, Mary, but I have found no proof other than a reference in a Holmes County history that says Emma gave birth to four children.]

The Scene Shifts to Ohio

Her father John Anderson, needed a caretaker for this three young children, quickly married Isabella Sarah McCabe and the family began to grow.  By the time they moved to Ohio in 1843, the young Sarah had two more siblings, Margaret and William.

In Ohio, her father bought a 140-acre farm in the fertile land of Monroe Township, and the family began to attend the Church of Christ in Welcome, near the farm.

In  Holmes County,  Ohio when Sarah Jane Anderson was about to turn ten years old, another sister, Amy, was born.  Three years later a sister, Caroline joined the family and then brother Joseph J. Anderson, my great-grandfather was born in 1848. The 1850 census for Monroe Township, Holmes County, Ohio, listed eight children in the family of John and Isabella Anderson, ranging in age from two (Joseph) to twenty years old (Erasmus). Sarah Jane  had turned 17 a month before the August census.

Several McDowell families lived in the same township and neighboring Killbuck, Ohio and somewhere, probably at the church where they would later be married, Sarah met James Coleville McDowell. The teen-aged Sarah must have been impressed by the six-years-older school teacher. Two of his siblings also taught school, bringing some extra respect to this farm family.  They married on March 25, 1852. [Two months later, Sarah’s stepmother gave birth to the youngest son of John Anderson, Franklin]

In September the following year, Sarah gave birth to their first son, John Anderson McDowell. The family grew as most did in those days, with a new infant appearing every two years. Sarah and James McDowell’s family included

Sarah’s children and life brought both joy and pain.  It appears that Alice McDowell suffered from debilitating “rheumatism”/ arthritis.  In the 1860 census, Sarah’s husband, James’ sister Martha was living with the family, perhaps to help with the children.  In 1860, James’ occupation is not listed, but although they are living in the rural township of Monroe, he does not own land equivalent to surrounding farmers, so I’m guessing that he was still teaching school.

The Civil War occupied everyone’s attention, particularly with both her brothers Erasmus and William enlisting.  In 1862 word arrived that William had disappeared, probably taken captive by the South. In 1863, her brother Erasmus died at Vicksburg.

When Sarah was 37, she and James and their four children lived in Oxford, an earlier name for Killbuck, Ohio–having moved back to town from the farm. According to the 1870 census, James is employed as a grocer and the children, ranging from six to sixteen years old, attend school.

In 1872, the family reels from shock when Sarah’s brother John falls from a fruit tree on his farm and dies at just thirty-six years old.  At the end of the decade, her father, John Anderson dies. It was in late 1870 that Sarah began to suffer from stomach and liver problems, according to her obituary.

On the positive side during the 1870s, Sarah must have been very proud of her oldest son John who graduated from Normal school and begins a teaching career, becoming Principal of the school in Millersburg Ohio, the county seat for Holmes County. By the end of the decade, he has advanced to Superintendent of the Millersburg schools.

Daughter Alice, on the other hand no doubt upset her mother when in 1879 she  gave birth to a daughter, Jennie, without having been married.  Alice and Jennie lived with Sarah and James McDowell  until she married William Eyster in 1881.  Alice then had two sons, Harry in 1883 and Clyde in 1886.

In October 1879, her son Thomas, a farmer in Holmes County, had presented Sarah with a grandson, and in 1881 son John and his wife also had a son. They went on to have seven more before Sarah died and a total of fourteen children.

At 46, Sarah had become officially a grandmother. Although her son David, a farmer, married, he did not have children. 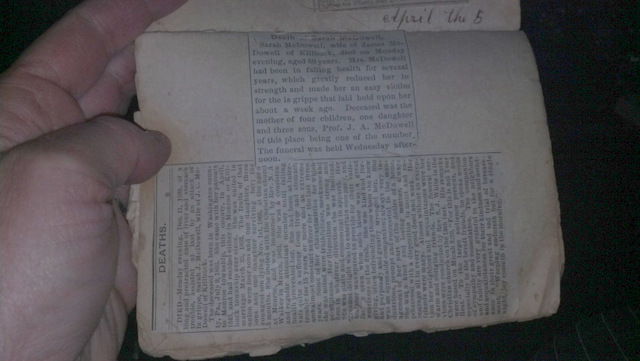 Sarah did not live to see her oldest son elected to Congress in 1899 and serve two terms before being defeated in a primary election. She missed his rise in education circles with increasingly important jobs throughout his lifetime.  She did not live to be part of the Anderson-Stout family picture that I have posted many times before. Her daughter Alice, grand-daughter Jennie and several of her siblings are in that picture.

After giving the facts of her life, her obituary goes on to say:

Some of her characteristics for which she was noted were truthfulness, meekness and promptness. Her disposition was strong and firm in whatever direction she was inclined . She was plain and economical in apparel. Her greatest delight was to entertain company, and no labor was spared to provide for their satisfaction even when such labor was a great weariness of the flesh. She was kind and forgiving, often befriending those whom she knew had purposely and greatly wronged her. She was an agreeable companion; always very industrious, prompt and successful in the management of her part of the duties of a home. She was a kind and loving mother, always possessed with a disposition to assist and encourage all in every good deed and work. Her friends were many. Almost without an exception her neighbors and acquaintances were her warm and obliging friends.

After reading the description of Sarah as “Meek”, I wonder at the contrast between her and many of the other women in my past.  And that “Plain and economical in apparel” is interesting, too.  I wish I had her picture. She may be one of the unidentified women in my great-grandmother Hattie’s photo album, but I have no way of knowing.

By 1900, we find Sarah Jane Anderson ‘s  husband James McDowell living with their son David who was teaching school. David returns to farming and we find James  living alone in 1910. He passed away in 1916 having outlived Sarah by 23 years.

Biographies of Members of Congress