I am surprised that wars have not been fought over food.  Controversies abound.  People have strong feelings and express them vociferously.

Let me get one thing clear straightaway. I loved the soft, spreadable version of Mettwurst and it will become a regular on appetizer plates and holiday buffets in my house. 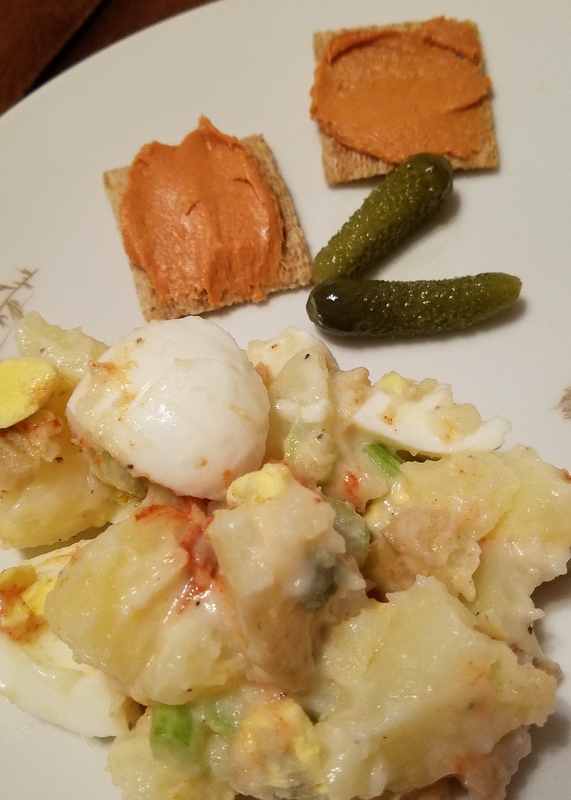 Mettwurst on crackers served with pickles and potato salad.

When I picked up a hunk of Mettwurst German sausage  at my neighborhood Dickman’s Meat and Deli, I wanted to continue my education on the many varieties of German sausage. 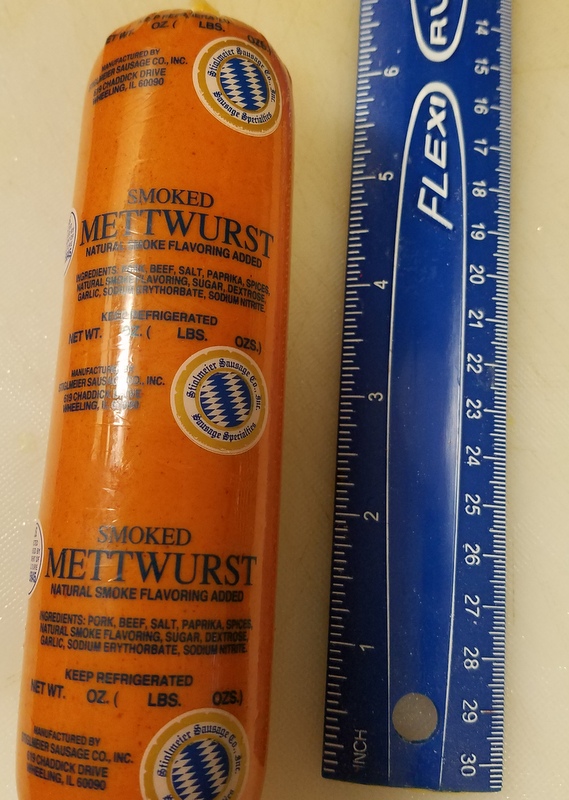 The Mettwurst sausage that I bought.

Then I turned to the website for the American sausage company, Steiglmeier, and ran into a brawl. Viewers of the site differed sharply in their ratings of the company’s Mettwurst.

It seems that there are many varieties of Mettwurst.  But unlike other sausages simply seasoned differently depending on what region they come from, Mettwurst comes in two distinct forms as well as in different flavors.  The one from northern Germany comes in a solid smoked link with a strong flavor that you must cook like bratwurst by boiling or grilling.

The  one I bought originated in southern Germany– a soft, spreadable, mild smoked sausage. The spreadable Mettwurst requires no further cooking. (That makes sense because Steiglmeier emphasizes Bavarian meats). Apparently the longer you smoke the chopped pork and beef the harder it gets.

So on the Steiglmeier site, those people who had eaten spreadable Mettwurst in Germany, thought the American company did a good job. But those who had visited northern Germany, hotly demanded that Steiglmeier stop calling this sausage Mettwurst, when it did not resemble  the sausage they remembered.  (Sorry, you’ll have to take my word for it, as the company has apparently refreshed its site and removed the comments.)

The whole tempest in a sausage skin reminded me of the Indian tale about the blind men and the elephant. The man who touched only the ear of an elephant  thought the animal was flat and round, while the one who touched the trunk said it was an animal like a python–long and squirmy.

It does seem rather strange that two different sausages would have the same name. According to Wikipedia,  “The Low German word mett, meaning minced pork without bacon, is derived from the Old Saxon word meti (meaning food), and is related to the English word ‘meat’.” I don’t know about you, but knowing that the name of this sausage (wurst) –mett– means chopped pork, or meat, or food–does not really clarify much for me.

WHAT’S IT MADE OF?

The Steiglmeier sausage has both pork and beef, making it the Branschweiger variety. The essential flavoring in this sausage is garlic, and paprika plays a big role in this one as well, giving it a nice pink tint.

I have already written about my appreciation of the spreadable Braunschweiger.  And the style of Mettwurst I bought may be called Braunschweiger Mettwurst. You can find other names for varieties of this sausage on the excellent web site thespruceeeats.com  which also gives a scientific analysis of how the curing process works.

The delicious garlicy Mettwurst  spread on crackers my be my favorite German sausage so far. However, I happened upon a blog post about sausage in Cincinnati that convinced me I have a duty to explore the German culture foods of my own state of Ohio. And that includes those link sausages that also go by the name of Mettwurst. My German ancestors mostly settled in northwestern Ohio as a child I lived either in the northwest or in Columbus, so Cincinnati foods were a world apart.  But, hey, its never too late to try another German sausage. 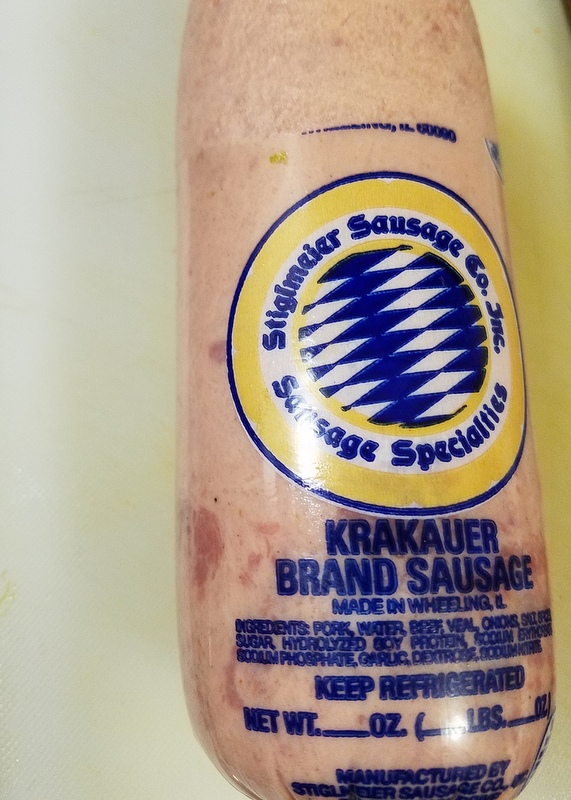 The name gives away that fact that although Krakauer is classified as a German sausage, its roots are in Krakow, Poland. Krakauer can also be called Kawassy. As with the other sausages we have looked at (Weisswurst, Gelbwurst) the ingredients and look of the sausage may vary according to its origin. I have found pictures of long skinny sausages, and fatter rolls meant to slice for lunch meat or thickly sliced, fry quickly.  I had that second kind. 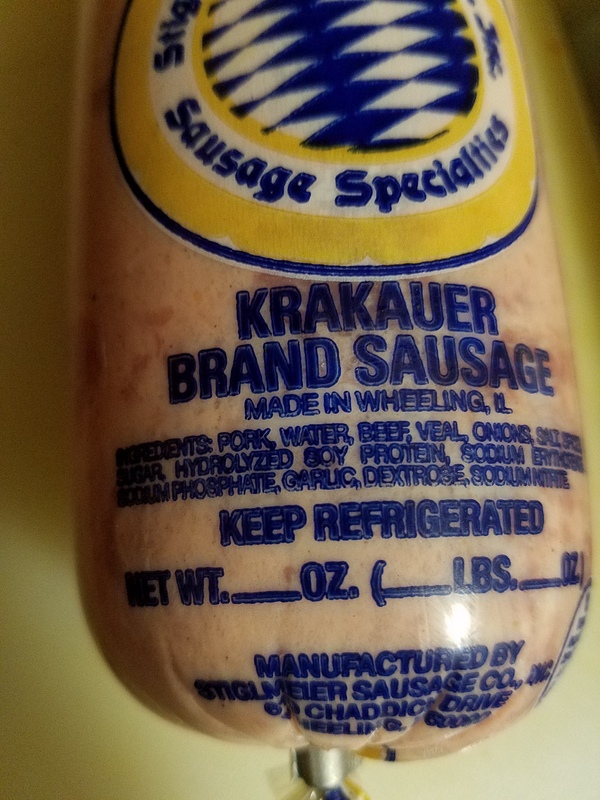 The sausage is traditionally 80% pork and 20% beef, and is smoked, boiled and smoked again before going to the market. One site described it as “bolder than bologna.”  I definitely liked this one–either as a cold cut or fried and found various uses for it. 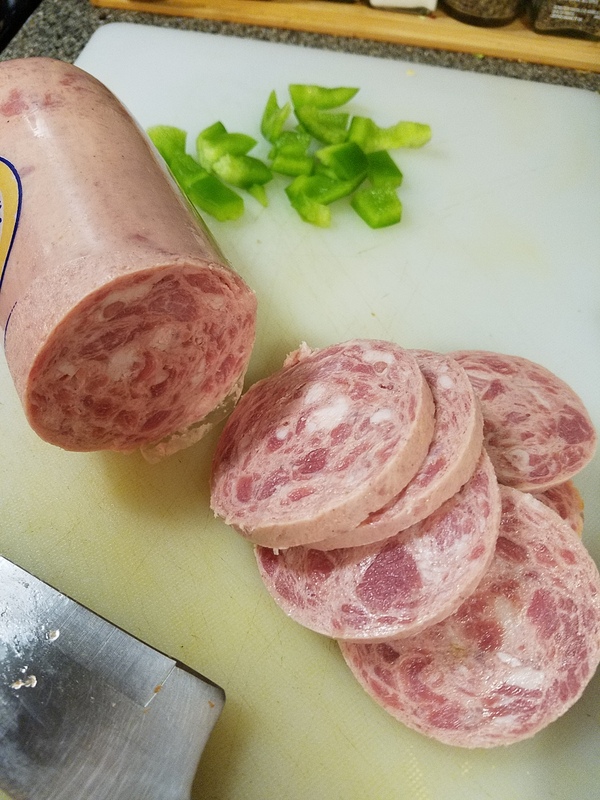 This Stiglmeier sausage has no nitrites and is fully cooked. [A site in German says that if sausage contains nitrite it is actually dangerous to grill it, as the high heat turns the nitrite salts into a carcinogenic. I had never seen that before, an interesting thing to learn.]

First, we had it for dinner.  After I browned the sausage in some vegetable oil, I stirred cubed beets into the grease and sprinkled it with nutmeg.  I also fried some potatoes. 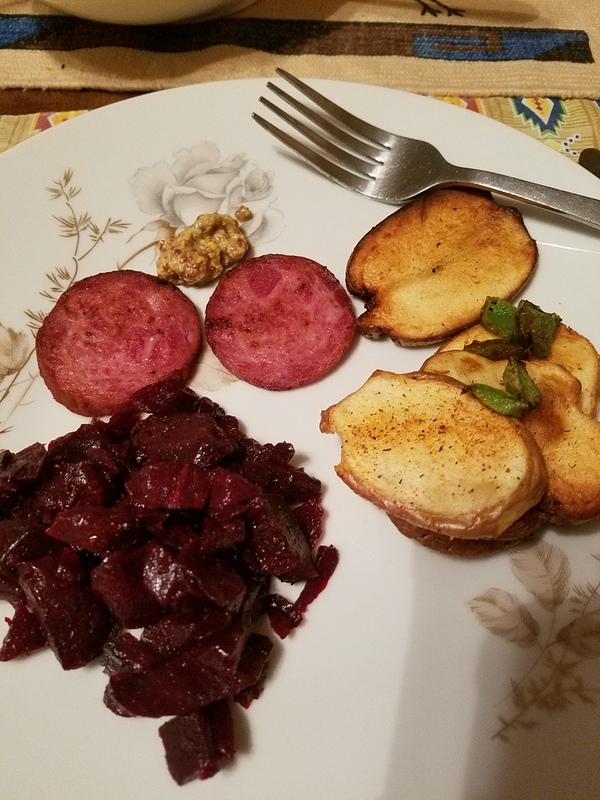 The next morning, I diced some of the sausage and stirred it into pieces of the left over fried potatoes–sautéed it and mixed in an egg. Yummy.

A couple days later, I boiled some greens (I had kale and beet greens on hand). I browned cubes of the sausage in a little vegetable oil. when the greens were tender (less than 10 minutes), I stirred them in with the sausage cubes and we had another twist on Krakauer sausage.

Krakauer/Krakow/Kawassy–whatever you want to call it–this sausage has climbed to the top of my favorites.