Last week, I got  a little sidetracked with maps of Tuscarawas County, Ohio and Switzerland‘s Bern region, to show how the ancestors of Kenneth Ross Badertscher‘s mother’s maternal line came from a small area in Switzerland, and clustered together in one area in Ohio when they came to America. It was their favorite place.

This week the challenge at 51 Ancestors is to talk about a “Favorite Place” and as I started looking at the maternal line of Ken’s father, I discovered the same kind of pattern as with his mother’s line, except that these people–The Amstutz, Baumgartner and Tschantz families in particular–settled around Kidron/Sonnenberg in Wayne County, Ohio. Kidron was the center of their favorite place. 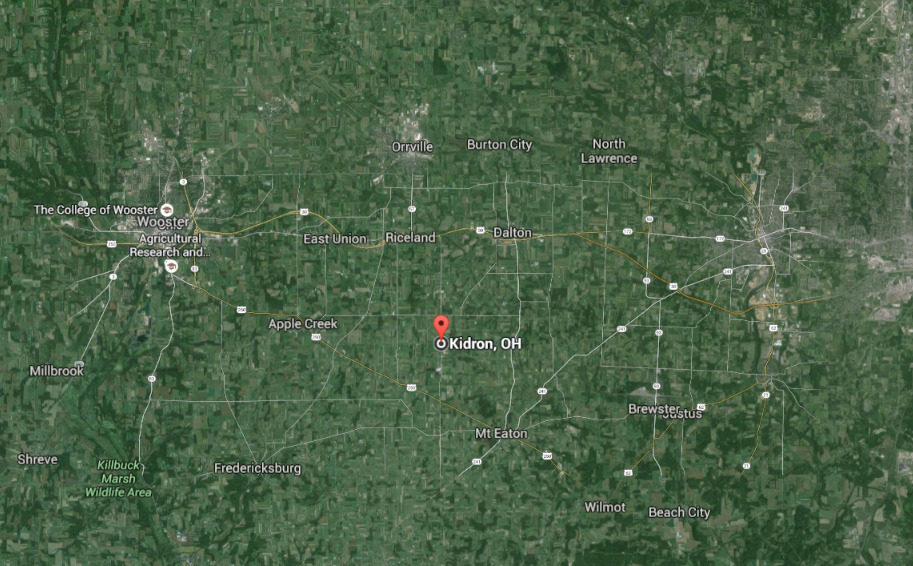 Why?  Probably partly because it looked like the dairy country of Bern, Switzerland–minus the towering Alps in the background. 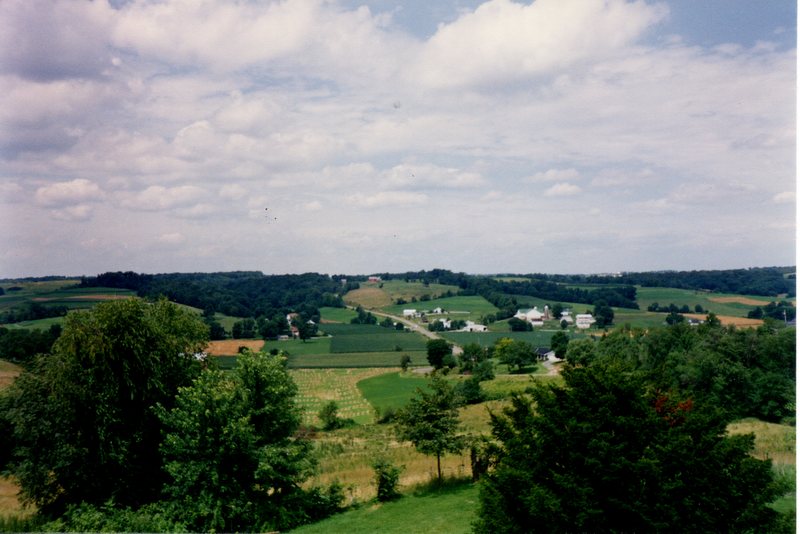 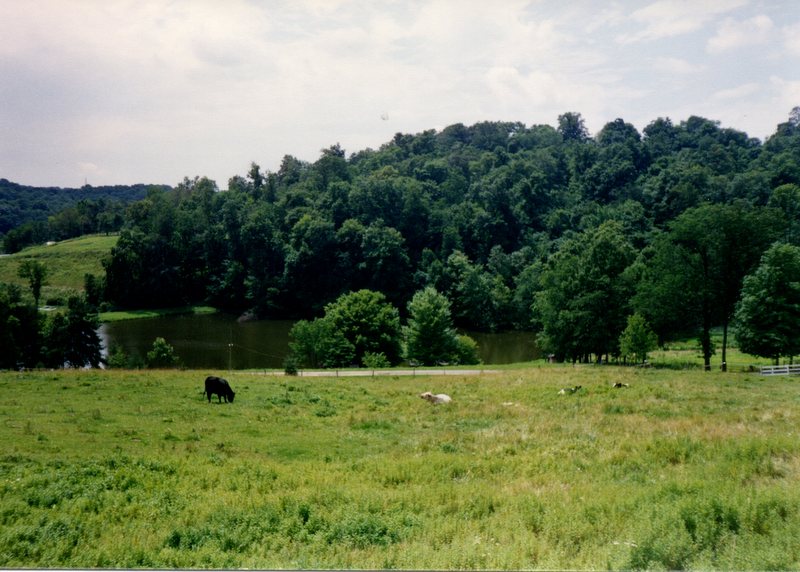 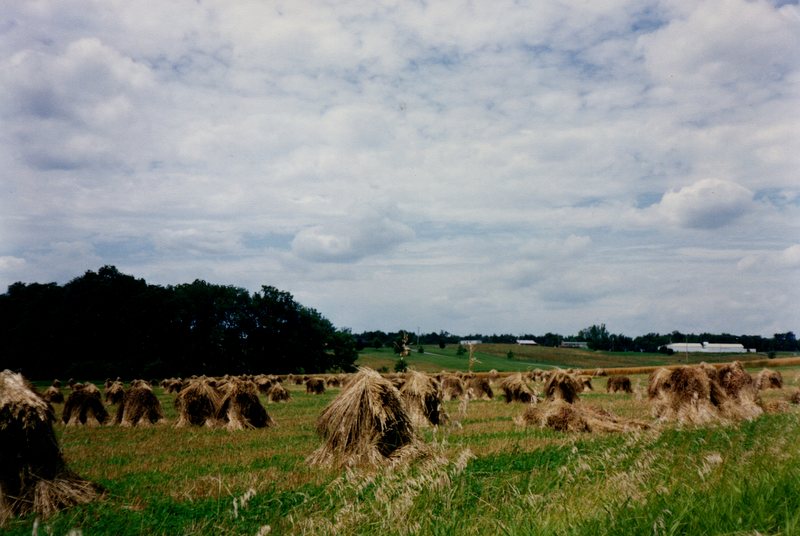 Haystacks on an Amish Farm in Wayne County, Ohio. Photo by Ken Badertscher. 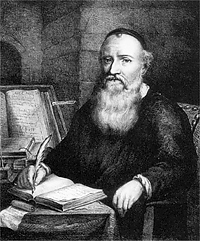 Menno Simons who gave his name to Mennonites

Despite the fact that most of Ken’s ancestors were dairy farmers, their principle reason for moving to America had less to do with rich pastures and scenery than with religion.  They were part of a reform movement of Anabaptists that was persecuted in Switzerland .  The last straw for the followers of Menno Simons, who believed in pacifism, came when the Swiss were instituted universal military service. These hard-working farmers with strong beliefs fled to protect their religion freedom. SImultaneously, an economic slowdown had men searching for work that would sustain large families, as we saw in the case of Anna and Samuel Schneiter. 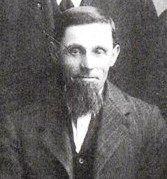 Abraham Amstutz, (One of many by that name). son of Johannes.

(One of many by that name).

In 1819, a small group founded the first Mennonite church in the area at Sonnenberg, named for a valley in Bern, Switzerland. Friends and family followed in 1821, and they formed the Sonnenberg Mennonite church.  Until 1834, they met in homes, and then built a log structure that served as church and school. As word went back to Switzerland, and as people saved money for passage, the communities continued to grow. A second community, Kidron, was named for the valley in Israel beside Jerusalem. Gradually, the communities merged as Kidron.

Meanwhile, they were clearing land, buying livestock and building log homes for their large families to live in. Ken’s paternal great grandparents lived in this house It reminds me of homes we saw in Switzerland where the farmers lived upstairs over the quarters for their livestock, so the livestock could keep warm in the winter. The Frederich Badertschers arrived about 1880. 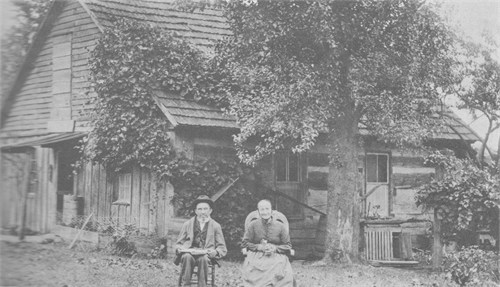 John Tschantz and his wife and their son Abraham and his wife were one of the first four families to arrive in Sonnenberg.  Their cabin survived (barely) and has been restored in Sonnenberg Village, maintained by the Kidron Historical Society. (I am working on the relationship to see if this family is in Ken’s direct line. Since there were many Tschantz families and many named Abraham, this may take a while.) Here’s the before and after. 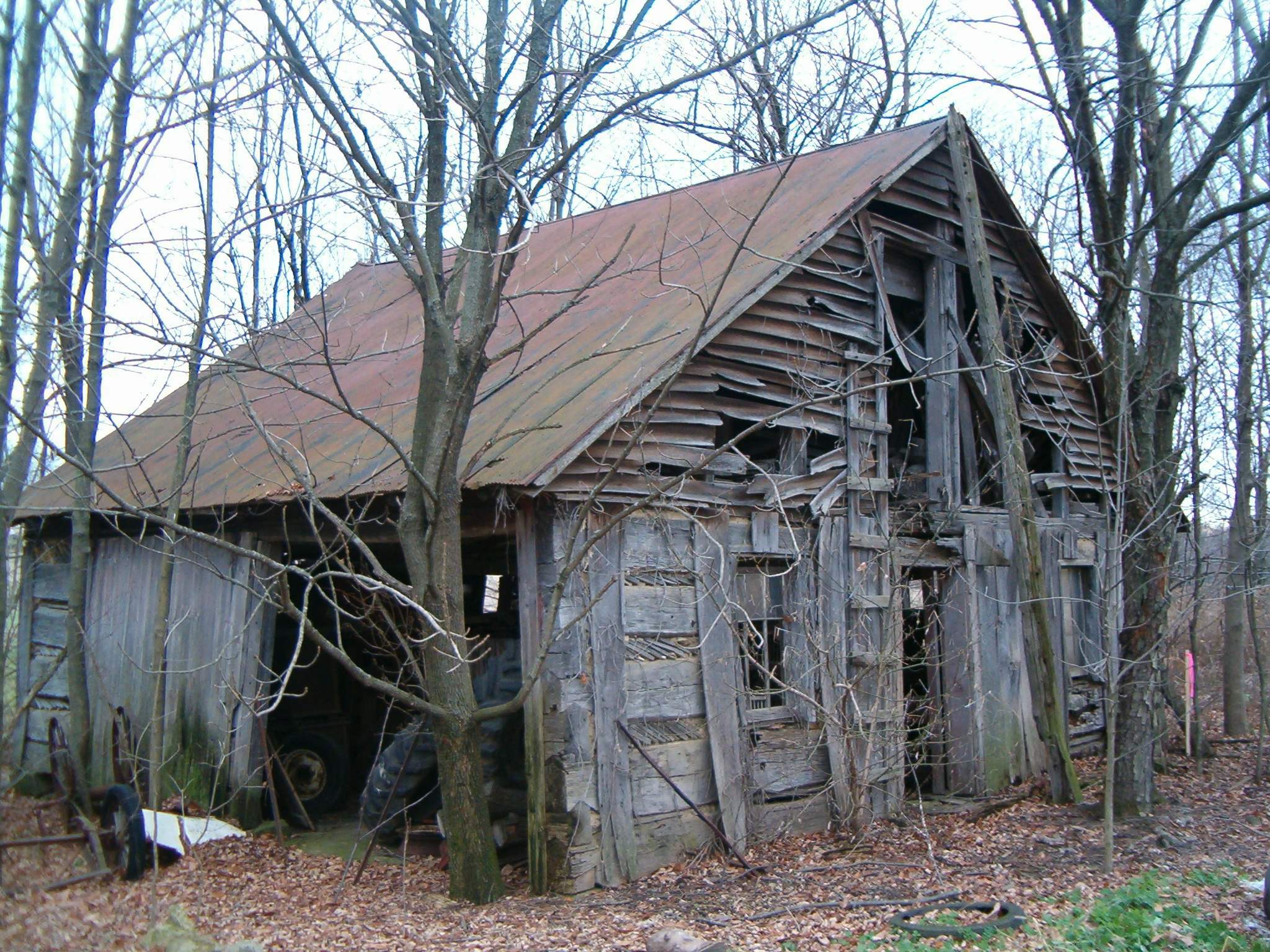 On this land map that shows (in the bottom of the southern half of the township) the land of Ken’s 2nd grandfather Abraham C. Tschantz, there are many other names that are part of his lineage such as Amstutz, Badertscher, Baumgartner, Sommmers, Lehman, Moser. Other names Ken recognized as schoolmates for neighbors: Gerber, Hoffstetter, Steiner, Eckard, Ressler, and Wertz.

You can double click on the maps to see the names more clearly on your computer. This map from Ancestry. com is dated 1897. If you disagree because of your own family information, please do share that information with me!

Northern half of Paint Township, Wayne County, showing Dalton where Ken went to school. His family moved from Dalton to the intersection of Rt 30 and Kidron Road. Red marks J. H. Tschantz, a great-great uncle.

Southern half of Paint Township, showing location of Kidron and land of Abraham C. Tschantz, and many different Amstutz families clustered around Kidron.

The Mennonite families, and the Amish families that also clustered in this area prospered over the years, and you will find many of the same family names.  The Kidron Community Historical Society  provides a valuable resource for anyone seeking to know more about family history of these Swiss immigrants who landed in Wayne County, Ohio. So why did the first four families settle the small community of Sonnenberg? I don’t know. Perhaps they originally thought to settle in Pennsylvania, but it was becoming too crowded. Land would have been cheaper in the very new state of Ohio (statehood 1803).

Why was Kidron/Sonnenberg a favorite place of Swiss immigrants in the early to mid 19th century?  Because family was already there.

If you are traveling through the Amish/Mennonite Country of Ohio, two places to look for clues as to why Kidron was a favorite place of the Swiss Mennonites are the Kidron Genealogical Center and nearby Sonnenberg Village in Wayne County, and the Behalt Cyclorama in Holmes County–a vivid depiction of the history of the Mennonite and Amish religions.