Jesse Morgan left five children behind when he took off for California in 1849. One was my great-grandmother, Hariett (Hattie) Morgan (Stout), whose mother Mary was Jesse’s second wife. The other four, including the eldest Charles Morgan, were from his first marriage. It seemed only fair that I tell what I know about these other children of Jesse Morgan before I finish his story.

My mother thought that both sons had gone to live with relatives, but I discovered that although that was the case with the oldest son, Charles, the second son, Carlos, working on a farm in Holmes County in 1850.

The two girls, however, did live in Killbuck, and would have been part of the family drama of Jesse’s comings and goings. My mother passed on stories from my grandmother that indicated that the two daughters were close to their half-sister Hattie and made the long trip from Colorado to visit her. Jesse’s children with Mary Pelton were:

What I Learned about Charles Morgan

From knowing almost nothing about the oldest child, Charles Morgan (Charley), I have gained a very complete picture of his life, as he moved frequently, married, farmed and became a Civil War soldier and outlived all his immediate family.  The nagging question I have about all four of these children is how much contact Jesse had with them after his first wife died. I found an intriguing coincidence in Charles history that hints they may have been in touch.

Charles was born in Chautauqua New York  and was only eight years old when his mother died. He had to make the journey from Ohio back to Chautauqua County New York where he lived with his maternal grandparents Ruel and Lucy Pelton. Charles went to school in Sherman, New York through the eighth grade. Public high schools were not common then, and the family probably did not feel a high school education at a private academy was necessary for a boy who was fated to be a farmer.

His grandparents were aging, and by 1850 they had moved in with their son, also named Charles. They took young Charles (now 20) with them. There he shared the household with his aunt and uncle and their two young children until he married the 19-year-old Miranda Leach in 1859.

Irony #1: Charles Morgan Starts His Own Family and Moves to Illinois

In 1862, Charles and Miranda moved to Coral in McHenry County, Illinois, where they had a second daugther, Vietta.  This move intrigues me, as I mentioned earlier.  Jesse Morgan purchased property in Crystal Lake, McHenry County some time before 1845. The property  that he bought and then sold to his friend “Doc” Woods in 1847 also lies in McHenry County.  Coral, Charles home, an unincorprated community, lies just sixteen miles east of Crystal Lake. Could Jesse have given that land he bought in the 1840s (which I am still trying to track down) to his son Charles at some time before Jesse’s death? Or had they been in touch either when Jesse was traveling or by letter, so that Charles knew about Jesse’s high regard for the farmland of northern Illinois?

At 34, barely settled into his new home in Illinois, Charles leaves his 24-year-old wife and their toddler daughter to join the Union Army.  The 95th Illinois Regiment, largely made up of McHenry County men, had already been through some tough fighting and probably used a two-month furlough period to recruit reinforcements from home.  Charles joined the Infantry as a private on October 3, 1864. If you want to know about the action he might have seen–and there was a lot for the 95th Regiment, you can see the Illinois Adjutant General’s Report here.

The army gave Charles an honorable discharge just eight months later, on June 12, 1865, just two months before the regiment was disbanded. He returned to his home in Coral, Illinois but the 1880 census reports he was sick on the day of the census.  His daughter, Vietta, 18, was still living at home, but in 1884 she married Frank Wood and by 1887 they had moved to Fern Valley, Iowa.

Charles and his wife Miranda moved to Fern Valley along with Vietta and her husband. Miranda died in 1893, and 1895 and 1900 census reports show Charles living with Vietta and her six children. A picture of Vietta from a family tree on Ancestry.com shows that although she dressed impressively (love the hat!), she was definitely not the looker in the family. 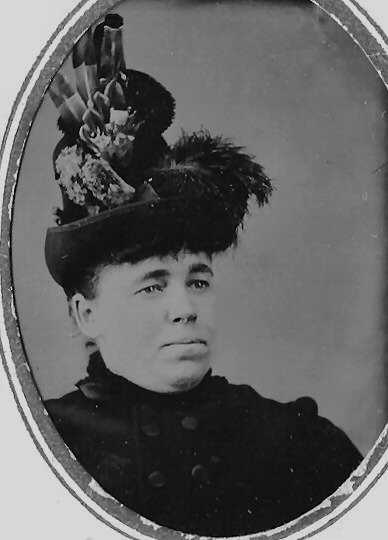 At 74, Charles married a second time– to a woman named Ida. The 1905 Iowa census and the 1910 Federal census shows them together, however Ida was no longer living in 1915. So Charles was two times a widow at 80 or so. For the first time, he is listed as Charley on the census instead of Charles. (Thanks to the 1910 census, I know that Ida was born in Ohio in 1844–14 years after Charles–and she had six living children.  All those children had left home by the time Ida married Charles.) I know very little about Ida (like her maiden name or first married name), but I do know that she and Charles were fated to be married less than ten years.

Charles Takes a Second Wife and Becomes a Double Widower

Not only did Charles’  second wife die between 1910 and 1915, but his younger sister Louisa died in 1909 and his only daughter moved to Turlock, California in 1910. After Vietta moved to California, she died there in 1911 when she was only 48 years old. Four serious blows to Charles Morgan in less than six years.

Irony #2: Charles Morgan Goes to California at the End of Life

Although Charles filled out the Iowa Census card in 1915 stating that he had been living in Iowa for 28 years, and was a retired farmer, Civil War veteran and widower at the age of 84, he apparently decided to join his son-in-law and grandchildren in California soon after he filled out that information. He had almost no one else. The man who had been virtually orphaned at eight had outlived his brother and one of his sisters, two wives and two daughters and his remaining sister was ailing in Colorado.  He had only grandchildren left for family.

He died in Modesto, California on February 11, 1916. His grave is marked by a stone honoring his service in the Union Army. Ironically, Charles Morgan is buried less than 75 miles away from where his father had been shot and killed 66 years before. 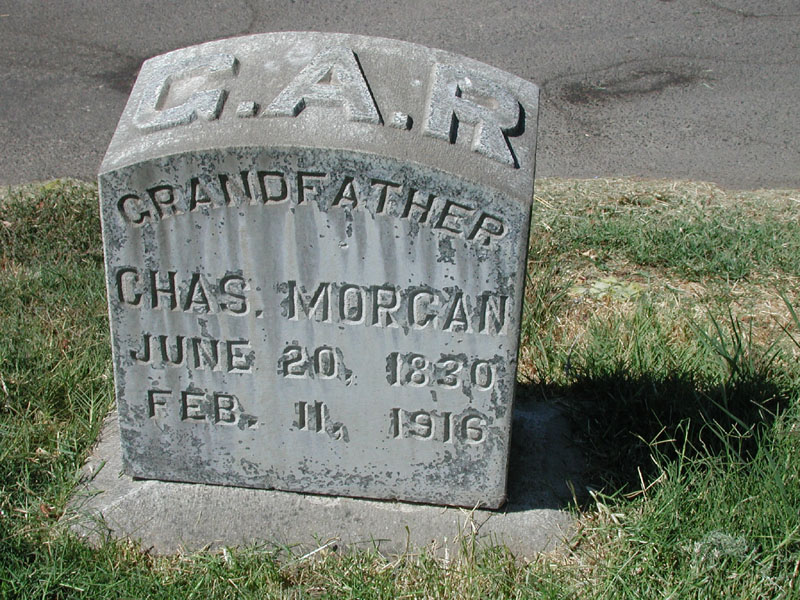 The next child of Jesse Morgan I sketch is Carlos Morgan, Jesse’s second son-– his westward trek and his beautiful wife.