I started the day in a frugal mood.  A bowl of apples shoved to the back of the refrigerator, were threatening to wither and turn brown.  Oh no! My grandmothers and great-grandmothers would not stand for that!

Remembering that incredible butter and molasses spread I had discovered along with this recipe for pumpkin/cornmeal bread, I cored and sliced the apples and threw them in a skillet with butter.  When they were nicely browned, I drizzled them with molasses. 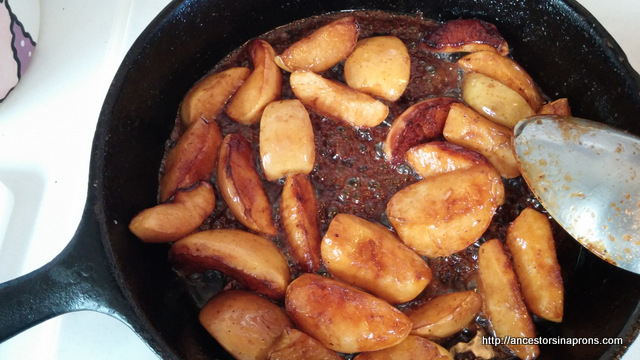 The apple slices browned in butter and molasses

But what do do next?  Maybe put them over a cake? It was time to pull out one of those vintage product cookbooks from my shelf.  This one–Betty Crocker’s Cake and Frosting Mix Cookbook (1966)–seemed perfect.  Betty always has a suggestion, and this book takes you from the basics of baking (with a mix of course) to some fancy decorating.But everything in the book seems doable for the ordinary person. 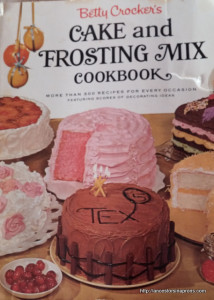 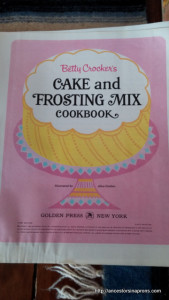 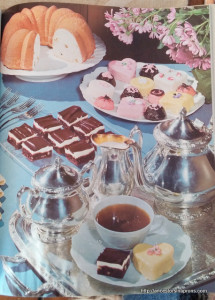 I love how the illustrations show imperfect decorations.  See the dribble on that little petit four in the foreground?  It makes the reader feel that they could do this do.  Maybe our expectations in the 1960s were a bit tamer than today?  Unless you count the expectation that we would polish silver and actually have a tea party with several kinds of cake.

One of my mother’s go-to desserts that we all loved, was pineapple upside-down cake. How I loved that gooey syrupy top that surrounded the pineapples and maraschino cherries that Harriette Kaser baked on the bottom of an iron skillet, until it was carefully turned upside down in all its glory.

The Betty Crocker Cake Book suggests using one jar of cinnamon apple rings, drained, instead of pineapple slices in their basic pineapple upside-down cake recipe.  Pour 1/4 cup of butter (1/2 stick),  into the cake pan and top with brown sugar and  the pineapple slices and cherries. 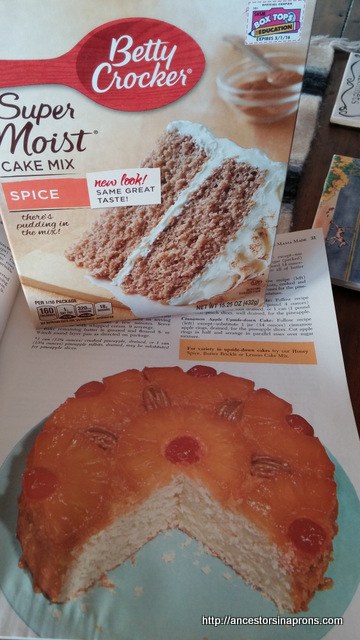 I already had a skillet with apples browned in butter an molasses (instead of brown sugar).  All I had to do was arrange them, mix up the Betty Crocker© spice cake mix and pour it over the top. 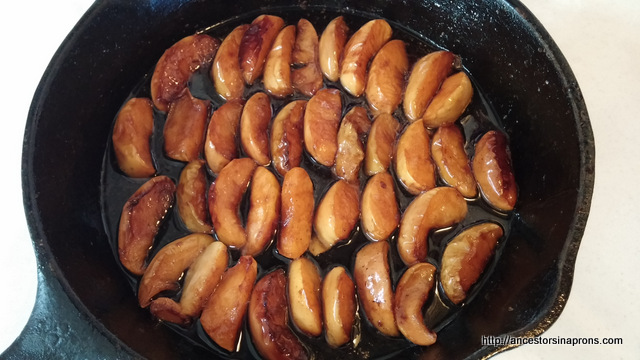 The book suggests using one-half of the prepared mix. Because my skillet was a little larger than a regular 9″ cake pan, I used a bit more than half. ( I made the remainder of the batter into cupcakes, to freeze for later.)

The cake needs to bake at 325 degrees (since the pan is dark), and took about 45 minutes.

With upside down cakes, you must invert them on the serving plate immediately when they come out of the oven.  With a cake pan, that is fairly easy, but with a heavy iron skillet and a heavy platter, it is a challenge.  As you see, it didn’t break up and fall apart (whew!), even though I did not get the cake centered on the platter. Imperfect. Just like a real cook. 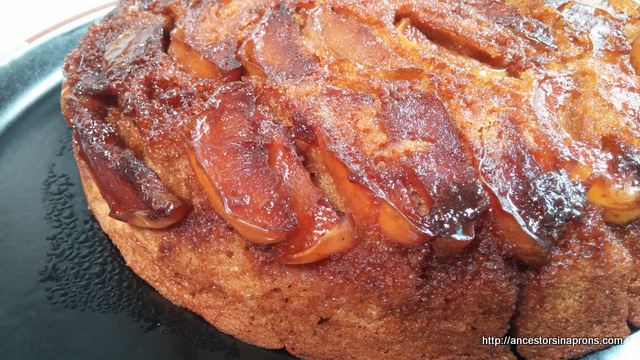 The only remaining challenge is letting it cool before I can dig into that molasses-buttery goodness. 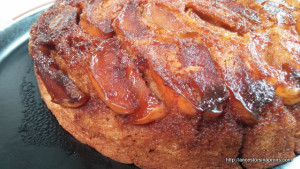 You can use the remainder of the cake batter to make a one-layer cake or 9-12 cupcakes, following baking directions on cake mix box.

If you do not care for spice cake, substitute another flavor of cake mix.

are available at Amazon.com. If you purchase through this link, you are supporting AncestorsinAprons.com and helping with my research. Even though it costs you no more, I make a few cents on each sale through my links. THANKS!

I realize that just last week I  shared a recipe for Cornmeal Muffins (and they are THE authentic cornmeal muffins from the Wayside Inn, so I hope you tried them), but then I came across another of Robin Benzle‘s terrific videos in which she combines two mainstays of our ancestors food cupboard–and a third mainstay for good measure–in a new twist on cornbread.

Cornmeal, pumpkin and molasses. Three basics of colonial cooking go into this cornbread. 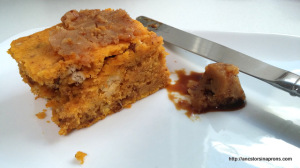 Here’s a video of Robin’s Pumpkin Pecan Cornbread with Molasses-Butter. Good by itself, the bread reaches sublime when you add the molasses-butter. Following the video, I have added a recipe you can print.

I have to admit this recipes cheats a bit and uses the modern pre-packaged cornbread mix, but if you want to be authentic, it would be easy to mix your Wayside Inn Old Mill ground cornmeal into the usual cornbread recipe and then add the additional ingredients.

Previously, we shared Robin’s mom’s Tuna-Macaroni Salad under our nostalgia category. Thanks for another terrific recipe, Robin. 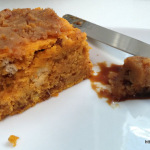 In the last letter  that we read from Pvt. Erasmus Anderson, he talked about the rations alloteed to the Union soldiers in the Civil War. Here is what he said to his wife in that November letter. 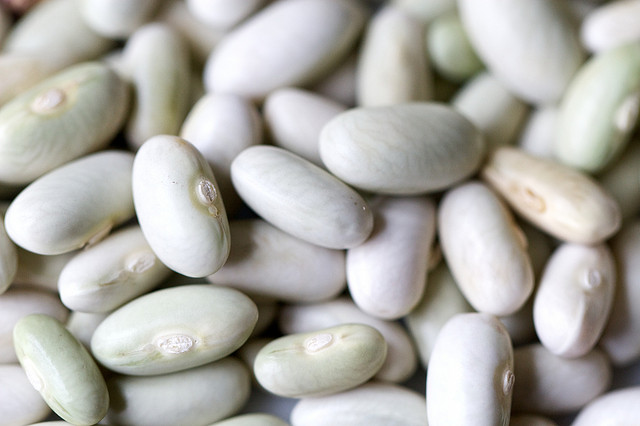 You wanted to know what our rations are. We draw coffee, sugar, crackers, either rice or beans or hominy. Either pork or beef and salt and yesterday we drawed molasses for the first time, coffee and meat and sugar we draw about enough, coffee plenty, but the rest of the rations it is hard work to make one drawing meet another; but I don’t think we have been drawing full rations yet, they all say so.

Today we’re going to focus on four of those items–beans, sugar, pork and molasses.

(When Erasmus mentions “crackers”, we can assume he is talking about hardtack, which was the rock hard biscuit distributed to the soldiers. We’ll get back to that in a later entry.)

There were five ways that the soldiers obtained food during the Civil War.

An online article provided some information about the Army and its beans. In this first excerpt, Bruce Catton, a preeminent writer on the Civil War, answers my question, “How did they deal with all those beans when they were marching?”. They didn’t.

Bruce Catton wrote in the 1962 edition of his book “The Army of the Potomac: Mr. Lincoln’s Army”:
“The favorite ration of all was the army bean. It was no go, of course, on the march, but in settled camps it was one food the men never tired of. Even the most inexpert cook knew how to dig a pit, build a wood fire, rake out the coals, lower a covered kettle full of salt pork and soaked beans, heap the coals back on and around it, cover the whole with earth, and leave it to cook overnight. The mess kettle, incidentally, was simply a heavy sheet-iron cylinder, flat-bottomed, some fifteen inches tall by a foot wide, with a heavy iron cover…. 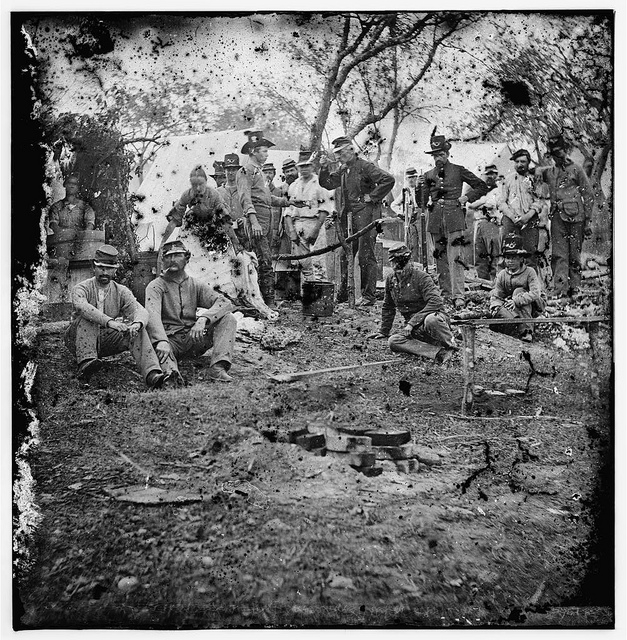 Baking Beans during the Civil War

From the same web article:

A soldier in the Maine Volunteers named H. B. Butler wrote to his wife, Mary, on New Year’s Day, 1865:
“We had some very nice baked beans this morning. We have a hole in the bottom of our fireplace where we bake beans as nice as they can be. We bake them in a pail with a cover to it. We put hot coals around the pail then cover them up with dirt. We put them in at night and in the morning they are nice and warm.”

From another website, we find these instructions on Baked Beans from an 1860 cookbook.

Put a quart of white beans to soak in soft water at night; the next morning wash them out of that water; put them into a pot with more water than will cover them; set them over the fire to simmer until they are quite tender; wash them out again, and put them into an earthen pot; scald and gash one and a half pounds of pork; place it on top of the beans and into them, so as to have the rind of the pork even with the beans; fill the pot with water in which are mixed two table-spoonfuls of molasses. Bake them five or six hours; if baked in a brick oven, it is well to have them stand in over night.  Source: Mrs. Putnam’s Receipt Book and Young Housekeeper’s Assistant, New and Enlarged Edition, New York: Phinney, Blakeman & Mason, 1860. 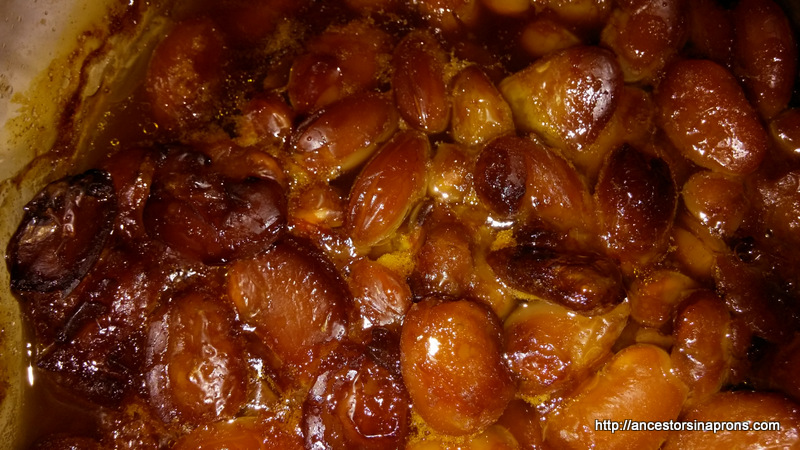 I have to admit that I neither dug a pit as the Civil War soldiers would, nor did I discard the soaking water from the beans. I used my oven–thank you Mr. Edison for electricity–and I retained the soaking water because we know now that our great-great-grandmothers were throwing out a lot of nutrition with that soaking water.

I am struck when looking at these old recipes how little seasoning and sweetening they used, so you will see that I increased both.  I was happy to learn that Erasmus received some molasses, because I like to flavor things with molasses–like the molasses apples I cooked earlier. And the sugar he gets in his ration probably came in a cone and was like the light brown sugar that we use today.

I did not  add catsup and/or mustard to the baked beans, which are part of most recipes you see today. If you have a tin cup full of my beans, you might want to add your own catsup and mustard to taste, however, I must say that these turned out quite tasty with just sugar, molasses and a pinch of pepper.

Finally, since salt pork–the soldier’s meat mainstay–is harder to come by these days, and fattier than we prefer,  I substituted a ham hock from my butcher. The one I got this time happened to be much leaner than usual, so my baked beans with molasses will definitely be meatier and less greasy than Erasmus’ beans. But if Erasmus and his friends had a Dutch Oven and since they did have a few days in their camp at Charleston, and they had all the necessary ingredients–this is about as authentic as any Civil War recipes we’ll cook. 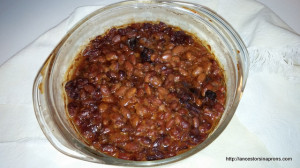 Notes: The Civil War picture and the dried beans picture come from Flickr and are used under a Creative Commons License. You can click on the pictures to learn more. The two pictures of cooked beans are mine.

I have cited sources above in the text for websites I consulted.