Erasmus Anderson’s second letter home, which we looked at last Friday, ended by saying that he and his friends had been in the countryside where they picked up some apples for a quarter. For that small amount of money, he filled his knapsack. 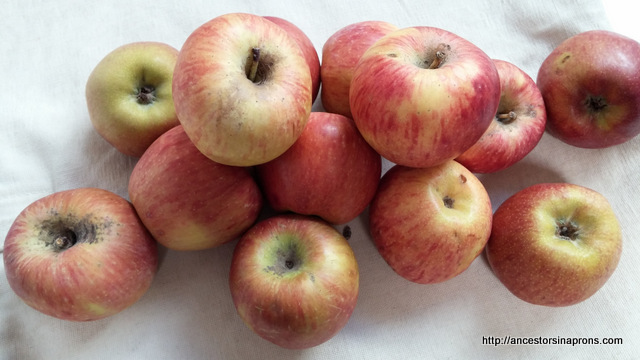 Organic Red Delicious Apples from above

I picked up these organic Red Delicious apples at the Farmer’s Market for considerably more than 25 ¢. They are quite small, particularly compared to a giant Honey Crisp I showed you with the recipe for Harriette’s Apple Dumplings.

But besides just eating them out of hand, what do you suppose the soldiers could do with their apples?  Of course they could just impale them on a stick and roast them over the fire–a perfectly good treat, particularly if the apples are sweet. But older varieties might not have been all that sweet, and if one had a sweet tooth, one might want to add some of the sugar from their rations and cook them in a pot–stewed apples. 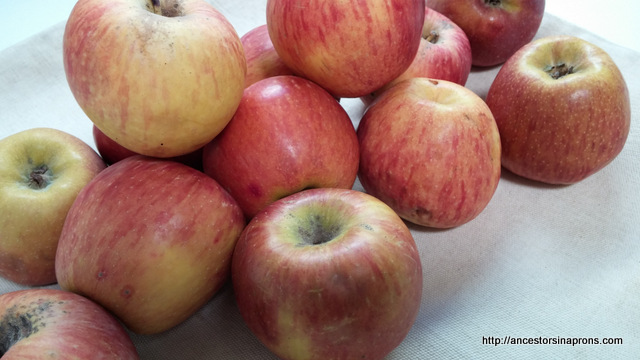 The soldiers sometimes “liberated” cooking utensils like skillets and pots from people they passed. If Erasmus and his gang happened to have a cooking pot in Company E, and if they were lucky enough to have some kind housewife give them some molasses, they could have made these molasses stewed apples.

The Civil War articles in the “Homes County Republican” included a story about a soldier who had taken a pot from a farmer’s wife as they marched through the countryside. Later, when they were told to strip down to 1/4 gear for fast marching, they went past the same house and he offered to sell the pot back.

If the men of Company E did not have molasses, of course, they could just make them the way my Grandmother Vera Anderson made them (minus the cinnamon). One of my very favorite dishes from her table was the stewed, sugared apples, sprinkled with cinnamon and served cold as a side dish.

But for Erasmus, I made these stewed apples with molasses. In our better-equipped kitchens, the warm molasses stewed apples would be very good indeed dribbled over ice cream or topped with whipped cream.

See more about molasses in this article at  American Food Roots. I doubt Erasmus would have mace on hand, but I highly recommend this sometimes overlooked spice to you.  It is the milder part of the nutmeg plant. 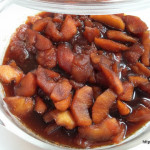 Cooking time and amount of sweetener will depend on the apples you use, so times here are approximate. I used the very small organic red delicious apples I got at the Farmer's Market to approximate the apples the Civil War soldiers might find on trees along their route. However, a tarter, more solid apple might be a better choice generally. Similarly, you have a wide choice on molasses. If you like the flavor of molasses, you can go straight for the Blackstrap (but I would increase the water and lessen the amount of molasses) or if you are not all that sure about the taste, go with a lighter molasses and water it down.