Back in our Colonial Days, elections–whether town hall meetings or national elections, were festive events.  Booze was involved.  And Cake. Specifically Election Cake.

I first came across election cake in an historic novel in which it is a southern tradition, but reading further, I learn that like so much of our Democratic tradition, Election Cake was born in New England. In the 18th century, they might have been commissioned by the town to feed all the citizens. 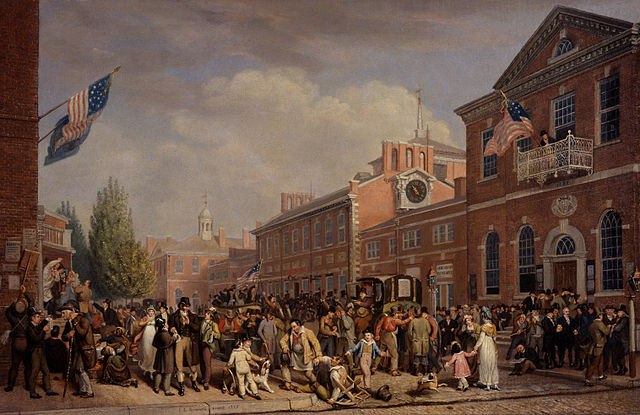 Bon Appetit says, “Muster” cake, as it was called before the American Revolution, was “a dense, naturally leavened,  fruit and spice cake — baked by colonial women and given to the droves of men who were summoned for military training, or ‘mustered,’ by order of British troops.” After Independence, the tradition continued to “muster” voters to the polls. 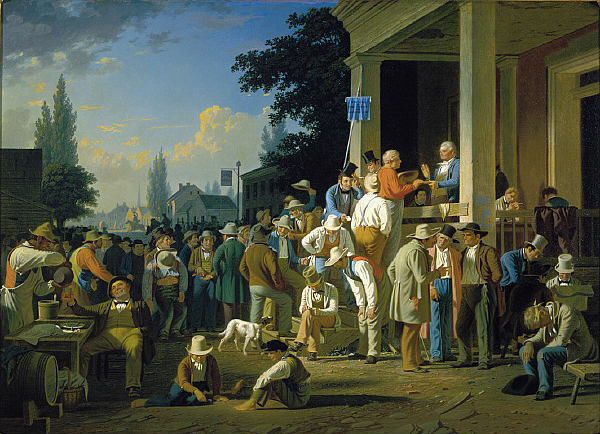 The original recipes that I found were daunting to say the least. After all, our foremothers were baking cake for ALL the men in the village.  And since the women didn’t have to worry their little heads about things like campaigning or voting, they could devote their time to a fruity, boozy cake. Their election cake could take several strong arms to mix ten pounds of butter into fourteen pounds of sugar, beating for half an hour.

Election Cake: Thirty quarts of flour, 10 pound butter, 14 pound sugar, 12 pound raisins, 3 doz eggs, one pint wine, one quart brandy, 4 ounces cinnamon, 4 ounces fine colander seed, 3 ounces ground alspice; wet flour with milk to the consistence of bread over night, adding one quart yeast; the next morning work the butter and sugar together for half an hour, which will render the cake much lighter and whiter; when it has rise light, work in every other ingredient except the plumbs, which work in when going into the oven. – Simmons, American Cookery, 1796.

According to Nourished Kitchen, by the middle of the 19th century the government did not pay for election cakes. Instead pieces of cake were rewards for voting the “right” way. Nourished Kitchen explains in detail the soaking of flour in milk overnight, and why these cakes were phenomenally nutritious. The link to Nourished Kitchen will get you a modernized and slimmed-down but still very authentic recipe using sourdough starter. For my election day cake,  I chose to try a new-to-me technique called pre-ferment, which makes a sourdough starter quickly with yeast, rather than feeding it for weeks.

The recipe below is from the Owl Bakery site, but I made a few tweaks that I think make it more readable for the home cook. Other than the fact that it won’t feed the whole village, this is a very authentic colonial recipe. And thank goodness for electric mixers!!

If you are serving this for election night parties–don’t forget the hard cider. 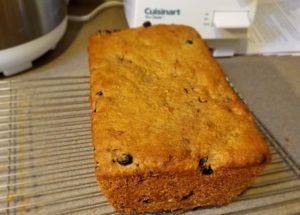 Historic 18th century cake was served on Election Day. Made with yeast because they did not have baking powder or baking soda.

Although you are not busy fussing with things all the time, you must remember to start this a full day ahead of when you want to take the cake from the oven. To fully ripen the cake, give it a few more days in addition, before you serve it.

Do read the whole recipe and get out all your equipment and ingredients before you start each day.

Don't be intimidated by the pre-ferment process. The Owl Bakery recipe specifies that the starter will be covered with bubbles. Mine wasn't. I read several other recipes and many referred to the starter being the consistency of pancake batter. Mine was as thick as bread dough. It worked anyway!

I used rum to soak the fruit and then used two tablespoons of that rum drained off the fruit in the cake recipe. You can choose to skip the alcohol (although it all cooks off) and use cider or even strong brewed tea.

You can use whatever fruits you want. The original recipe mentions raisins and dried plums (prunes). I chose fruits I thought our New England ancestors would have--dried apples, dried blueberries, and the dried plums mentioned in the old recipe. I notice that they use currants frequently in old recipes rather than raisins, and that would work well.

Be sure you measure that 1/4 tsp of yeast--it is a small portion of one of the envelopes of yeast, if that's the kind you have.

Instead of yogurt, called for by Owl, you could use what our grandmothers would have more likely used--either buttermilk, or milk they soured themselves with a little vinegar.

I used molasses--because I love molasses and it is authentic. Also, honey has gotten terribly expensive lately. However, I did not think my cake was as sweet as it might be. I might use honey or use a sweeter fruit than the dried apples. And I would be tempted to increase the sugar by 1/4 cup.

NOTE: If the latest news I uncovered is correct, I owe Israel How an apology. I wrote earlier that his life was an asterisk. But if this bit of news is correct, his life was anything but dull. According to As Ancient is This Hostelry: The Story of the Wayside Inn, Israel How was killed by Indians in a raid on Rutland, Massachusetts. I am trying to verify that this was the cause of his death, and that the father of four children and his wife pregnant with their fifth, was indeed an Indian fighter. Stay Tuned.