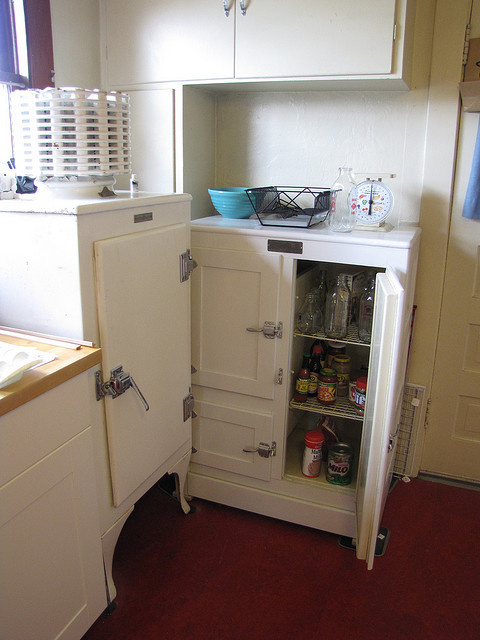 An early refrigerator with motor on top, and the real icebox. (Ice went in the top right hand door.) Photo by Wendi Dunlap

Grandma kept oleo in the icebox. Fortunately, by the 40s and 50s she did not have to be a bootlegger to obtain oleomargarine, now  called margarine.

Isn’t it amazing how our food terms change over time? Youngsters today may think we’re talking about a thermos chest for picnics when we say icebox.  And I’ve seen several recipes on the Internet that find it necessary to translate “oleo.” And how about our attitudes? Repulsive one day, acceptable the next.

Oleomargarine, a butter substitute developed in France, because of the interest of Napoleon in having a spread that would not turn rancid in the field as butter would. The product, originally made with beef fat mixed with milk was patented in 1869 in Europe and in the U.S. in 1873. Then followed an 80 year war between the dairy farmers and the manufacturers of the “other spread.” Eventually the name became “margarine” and the ingredients were vegetable instead of animal. 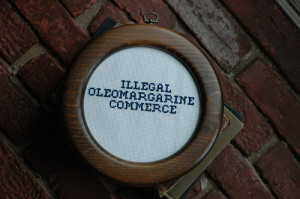 First, butter substitutes were outlawed entirely. Then the Supreme Court ruled the law unconstitutional. Then yellow butter substitutes were outlawed. Besides forcing the sale of white margarine (not very appetizing-looking), margarine was sometimes required to be pink or red or even black (even LESS appetizing).  Because these laws were enacted state by state, people would cross state lines to obtain yellow margarine or dye packets for the white stuff and smuggle it back to their own states. Then various onerous taxes were applied. And meanwhile a propaganda campaign accused margarine of being “the slag of the butcher shop…a compound of diseased hogs and dead dogs,” and other creative slurs.

The laws were touted as protecting the consumer, but they obviously were protecting the dairy industry and hurting consumers who wanted to save money.

Smith has a lovely baby girl

The stork left her with a flutter

For he hadn’t any but her. 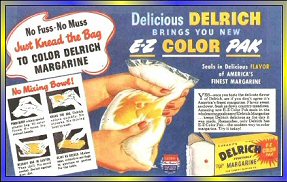 The oleomargarine manufactures,  realizing that people wanted YELLOW spread, added color capsules that could be stirred into the oleo. While it was illegal for them to sell colored margarine, the law did not prohibit people from coloring it once they bought it.  It was kind of messy, but Cudahy (the meat packers) in 1947 got the bright idea of packaging the capsule of food coloring inside a heavy plastic bag that contained the white margarine.

House on left, Columbus Ohio where the Kaser family lived around 1950. (Picture taken in late 1990s)

It was while we lived in this house in  Columbus, Ohio, that I experienced the plastic bags and enclosed color capsule.  For a short while before that, it came in blocks of white stuff that looked just like lard. But margarine became the spread of choice with high prices of butter during the Depression and then shortages of butter during World War II.

Mixing color into the white oleomargarine may sound awful to you, but as a nine-year-old, I thought it was great. The white margarine came in a plastic bag. We’d break the capsule apart by squeezing it through the bag. Close the bag and squeeze, squeeze, squeeze until it turned yellow. Food magic.