Have you read Jesse Morgan’s earlier letters to his wife? If you read the first letter, you may remember his enthusiasm for describing the land and his trip. Do you recall his admonition to Mary?

“Don’t let any trouble annoy your feelings but keep up a buoyant spirit.”

That was back in 1843. It looks like my great-great grandfather could use a little of his own advice as he writes to Mary from Palmyra, New York during August 1847.

Palmyra was the home of Joseph Smith, founder of the Church of Jesus Christ of the Latter Day Saints (Mormon).  Coincidentally, Joseph Smith was born the same year as Jesse Morgan–1805.  A Mormon publishing house thrived in Palmyra, and the Book of the Mormon was firsts published there. By 1847 when we know that Jesse visited Palmyra, Joseph Smith had been gone for several years, having migrated west, first to Kirkland Ohio and then on to Nauvoo, Illinois. However, the Mormon headquarters in Kirtland Ohio was still active when Jesse moved to Ohio. The majority of Smith’s followers had moved on to Illinois by the time that Jesse started making forays into Illinois. Jesse seems to be always following the Mormons. Particularly in the next stage of his life.

But now he has stopped at Palmyra, along the Erie Canal. Perhaps the contact with the Mormon religion during this low period of Jesse’s life had an influence on later events. (You’ll just have to keep reading future posts to find out the significance.)

If you compare the writing on this letter to that on previous letters, two things are immediately obvious. It is not the carefully formed script he used earlier, and instead of firmly straight lines across the page, the lines dip downward. A graphologist will tell you that downward slanting lines denote pessimism.  (You can’t fool us, Jesse!)  Only in his signature, does he at least try to regain his strong sense of self importance and optimism. 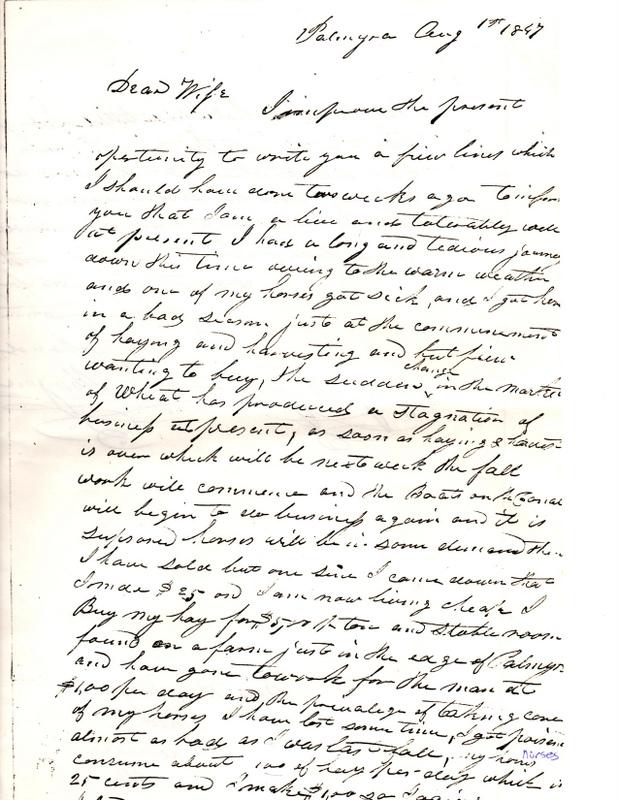 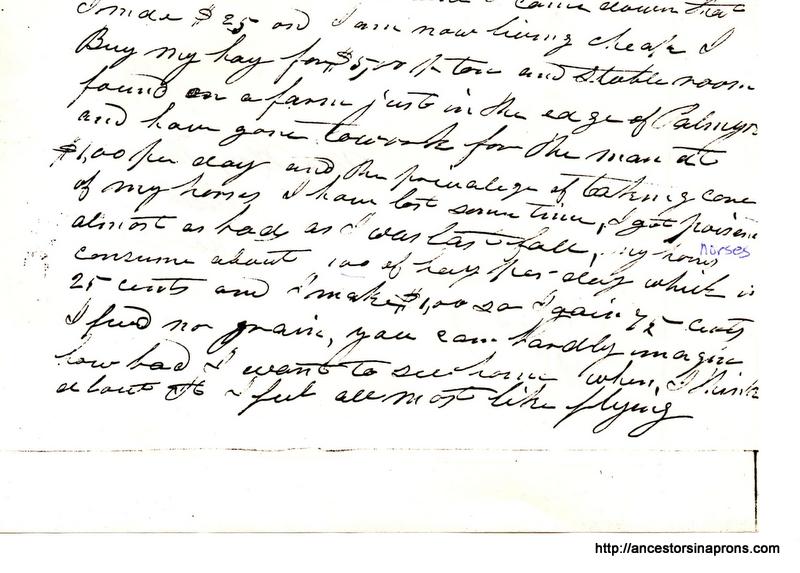 Bottom of 1st page of Jesse Morgan’s letter to his wife, Mary, August 1 1847 from Palmyra, NY 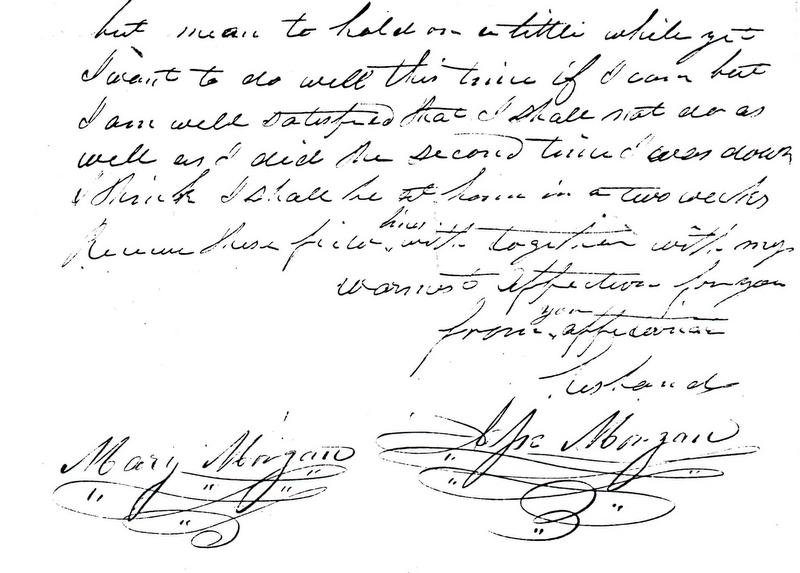 I improve the present opportunity to write you a few lines which I should have done two weeks ago to inform you that I am alive and tolerably well at present.

I had a long and tedious journey down this time owning to the warm weather and one of my horses got sick, and I got him in a bad season, just at the commencement of haying and harvesting and but for wanting to buy, the sudden change in the market of Wheat has produced a stagnation of business at present.

As soon as haying and harvest is over which will be next 6 weeks the fall work will commence and the boats on the canal will begin to do business again and it is _______horses will be in some demand then. I have sold but one since I came down that I made $25.00.

I am now living cheap. I buy my hay from $5.00 per ton and stable room found on a farm just in the edge of Palmyra and have gone to work for the man at $1.00 per day and the privalege[sic] of taking care of my horses. I have lost some time. I got poisoned almost as bad as I was last fall. My horses consume about  ___[10 lbs] per day which is 25 cents and I make $1.00 so I gain .75 cents. I find no grain, you can hardly imagine how bad I want to see home when I think about it I feel all most like flying but mean to hold on a little while yet. I want to do well this time if I can but I am well satisfied that I shall not do as well as I did the second time I was down. I think I shall be at home in a two weeks.

from your affectionate husband

Thoughts on the Letter

I have very few comments to make on this letter from Palmyra.  His remark that he should have written two weeks ago, indicates to me that he has been away at least a month. Possibly  he continues a trip he wrote about in April and June.

One thing slightly puzzles me–his references to going “down” when he is going to Palmyra in northern New York.  Since we do have the usage of “down East” for Maine, I wonder if East was “down” and West was “up” in the way that now North is “up” and South is “down”? Perhaps one of my astute readers can clarify?

Say what you may about Jesse’s odd, meandering way of life, and his long absences, he was not afraid to work hard. He will do whatever is necessary to survive.  I am particularly touched by “..you can hardly imagine how bad I want to see home when I think about it I feel all most like flying but mean to hold on a little while yet.”

However, I can’t help but feel even sorrier for Mary.  Back home in Killbuck, she takes care of her own daughter and one of Jesse’s, without a regular source of income. She has no certainty about when her husband will resurface. What a pity that we do not have a record of how Mary is getting along with her end of “living cheap, ” while Jesse is suffering in Palmyra.

Jesse continues to travel, but with greater success.  He purchases land, indicating that he must have had success in selling horses.