Veteran’s Day Letters From the Front

As we approach Veteran’s Day, when we honor all those who have served our country in the armed forces, I have been looking at letters from the front written by some of those sailors and airmen (no infantry in this batch of my family).  Like most letters from men and women in battle, they generally reflect a longing for home mixed with a desire to reassure the folks at home. But what makes these two letters from uncles to their nephews so poignant is the way they show hopes of peace that came to naught.

A Letter From the South Pacific During World War II

In the very first paragraph of his letter to his nephew, Uncle Bill Anderson hopes that this World War really will be the last one and his nephew will not have to take part in another. 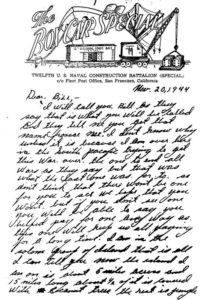 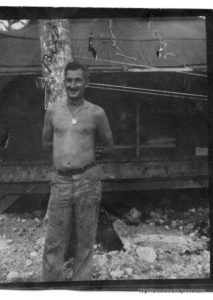 WWII Letter from Wm. J. (Bill) Anderson to nephew Paul William (Bill) Kaser who was born October 25, 1944. Uncle Bill Anderson wrote many letters from the front to the folks at home. This one is special because it presents such a vivid picture of the Solomon Islands and the life of a SeaBee during the war in the Pacific.

[Note: there were no paragraph indentations in the original letter. I have added some to make reading a little easier.]

I will call you Bill as they say that is what you will be called and they tell me you got that name from me. I don’t know why unless it is because I am over here in the South pacific trying to get this War over, the one to end all Wars, as they say but that was what the last one was for to{o}, so don’t think that there won’t be one for you to see. We hope that you won’t but if you don’t see one you will be able to say you helped pay for one any way as this one will keep us all paying for a long time.

I am in the solom {Solomon} group of Islands. That is all I can tell you now. The island I am on is about 5 miles across and 15 miles long about ½ of it is covered with coconut trees the rest is jungle and so thick you can hardly get through It is very hilly and steep. It is a coral island, not much top soil, but there are some large trees back in the hills. It is very pretty. You can see 5 or 6 islands from here and the sunsets are very pretty over the water. It gets very hot here in the day time and it rains about every day.

My Battalion is a Special as you can see by the heading on this letter. We unload and load ships. Have been here 11 months now and handled over a million tons of war supplies of all kinds. I am a store keeper by rate. That is a checker. We check the cargo on and off the ships and send it to the different destinations.

The army moved all of the women off this island. They are on another island about five miles from here but we can go over and see how they live. They live in grass houses, not very big and no floors in them, no bed or table of any kind. They sit and sleep on the ground. It is plenty dirty all over and they have sores all over the most of them. If one lives to be 35 yrs. Old, he is considered and old man so don’t believe all the pictures you will see of the pretty girls over here. All they wear is a short skirts.

Have not seen any real action. Had 2 bombings when we first got here and nothing big since. We are getting ready to move now but do not know how soon or where to as they don’t tell us for fear the Japs might get the news and be waiting for us some place out on the sea.

There are a few natives here on this island. They are not very big, about 5 ft 2 or 3 and very black and skirt around their waist. The men and women dress alike and cut their hair the same way. The little boys and girls do not wear any clothes till they are 7 or 8 yrs. old. They get married at 10 to 12 years of age. They are very thin but picturesque as you are to be taught. There are no wild animals here except pigs but a lot of different kinds of birds. A lot of white and green parrots, a few snakes, and lots of rats and all kinds of bugs. We sleep under mosquito nets all the time and live in tents with wire screen all around.

Well, I guess this will be enough for your first letter as you are not very big yet but thought you would like to have a letter to put in your scrapbooks from the South Pacific as when you get a little older, you will have to learn all about this war from history, so good-bye for now. Will be seeing {you} before long.

Unfortunately, his wish for permanent peace did not come true.

The letters from the front continued. 25 years later, the baby he wrote to–Paul William (Bill) Kaser– who received that letter from the Navy C.B. in the South Pacific had grown up.

In 1969, a second “Uncle Bill” served as a Lieutenant in the Air Force, assigned to Vietnam.

This letter, one of many letters from the front sent by the journalism major turned soldier, was another special letter because of the illustrations and descriptions attempting to make the war understandable to a small boy.

The airman plays guitar for Vietnam orphans during the war. 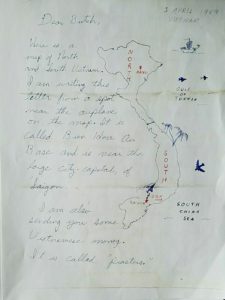 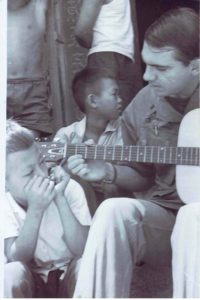 Transcription of Letter from Vietnam

Here is a map of North and South Vietnam. {Drawn down the right side of the page.}

I am writing this letter from a spot near the airplane on the map. It is called Bien Hoa Air Base and is near the large city-capital of Saigon

I am also sending you some Vietnamese money. It is called “piasters.” Share it with your brothers. The picture is of King Hue who helped free Vietnam from the Chinese many years ago.

This is a very hot country and has many jungles and rice fields.

The people in the country are poor and their children do not have good schools to go to as you do. They often have only half as much food to eat as you do.

But, the people are friendly and one of them, an old man from Hanoi (see map) is teaching me to speak Vietnamese.

We have a Squadron mascot named “Ruben” who looks a little like Bitsy. [Dog of Butch and his brothers].

I will write another letter soon and send more pictures. Read this letter to your brothers.

{Drawing of a dog with a Vietnamese

World War I was not the promised “war to end all wars,” World War II  did not fulfill Navy man Bill Anderson’s hopes to guarantee that his nephew would not go to war.  And the chain of family members in service to their country continued.

The “Butch” in Bill Kaser’s letters from the front grew up to join the Navy nuclear submarine force during the Cold War. In his case “the front” spread across all oceans.  Although he did not have a nephew, he did have a son.

Now both those 3rd generation veterans, David and Kenneth Paul II,  have small sons.  Will they escape the unwanted tradition that has continued unbroken for three generations? Will they be writing e-mail letters from the front, Skyping and otherwise communicating from the front to children at home as they explain some exotic far off land where American troops are fighting? We can only hope, along with Uncle Bill Anderson, that the chain will be broken before a fourth generation.

The Veterans We Salute

These five veterans follow in the footsteps of all the other family members and ancestors we honor on Veteran’s Day. We thank all of them, not just on Veteran’s Day, but every day for our Freedom.

I wrote earlier about Uncle Bill, and drew on history of the Special 12th Battalion.  That history says that the battalion stayed in the Russell Islands from January 1944 until May 1945 when they went to Okinawa.  Apparently, the history was off. if Uncle Bill is correct at least his contingent were on a tiny island in the Solomons in November 1944. I do not question that he was in Okinawa later, because he brought home Japanese pottery as souvenirs.

I am no closer than ever in figuring out what exact island he was on, as sources only talk specifics about the five or six larger islands in a cluster of 1000 that make up the group, and one that is 15 miles by 5 miles does not warrant mention.

The battles of the Pacific are detailed in this article with many photographs. And the map below comes from the U.S. Marines record of the battles. To put things in perspective, the entire Solomon Islands could sit inside the state of Maryland. 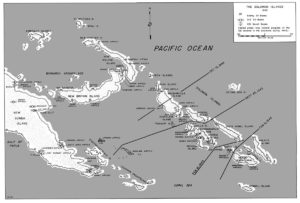 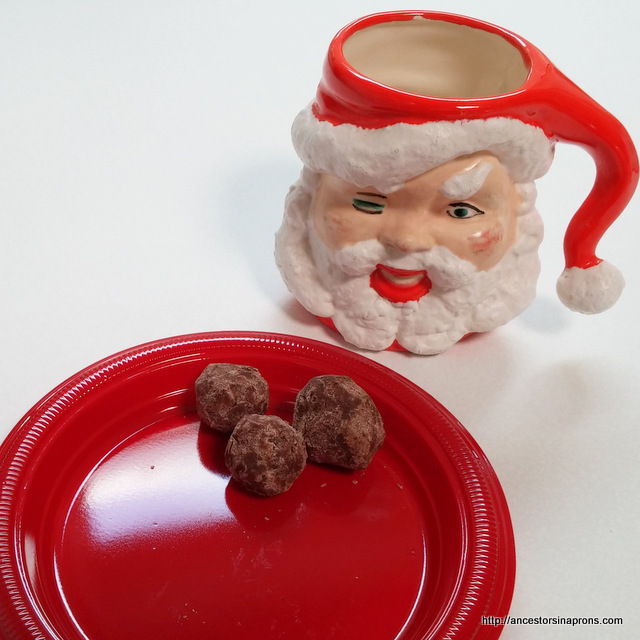 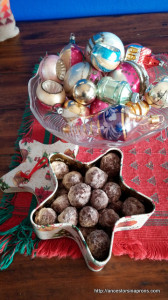