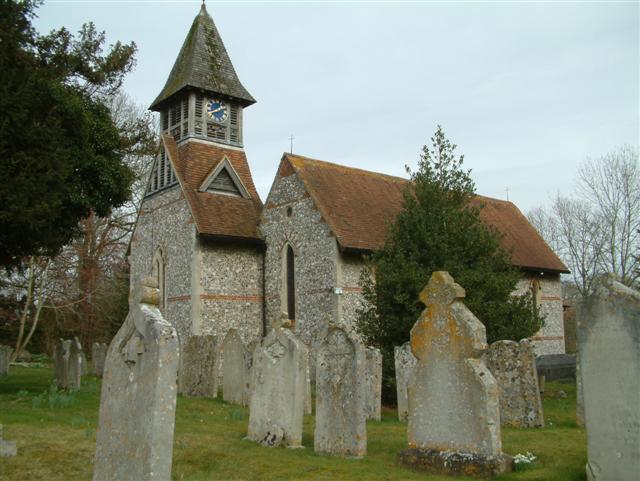 The Weyhill church where John Bent’s family members were baptized, married and buried from the 16th century.

The Bent Family in England

John Bent’s father was Robert Bent of Penton-Grafton, Weyhill Parish in Hampshire County, England. His grandfather’s name: John Bent. The small village lies about seventy miles south of London. To put the history in perspective, when John Bent was born, Elizabeth I was still Queen. He had two older brothers, Richard and Robert, and an older sister, Jane. By the time he was six years old,  three younger sisters would be added to the family.

Names are important to John Bent’s story.  His aunt Joanne Bent married a William Noyes–a family closely intertwined with the Bents in both England and America.  John’s mother’s name was Agnes, as was one of his aunts.  The Bents favored the name Agnes sometimes written as  Annis or Ann and named a bewildering array of offspring by that name. The next person I’ll talk about is an Agnes with a daughter Agnes and a grand daughter Agnes. Naturally, the Bents also recycled the names Robert and John and Richard and Joseph.

In 1624, John Bent married Martha, whose last name I have not proven.  According to one index she was Martha Blanchard and according to another, possibly Baker. Other relatives of John Bent are married to both Bakers and Blanchards. However both indices agree they were married in England in 1624. John would have been 28 years old.

In the following eleven years, the couple had five children. (For more details about the family, see the story about John Bent Jr., born in 1636. )

In 1631, John’s father, Robert, died leaving John and his older brother 40 shillings each. That is less than left to other children, but may indicate that they had received land from their father. According to Puritan Village, John had inherited 45 acres of land. Two of John’s sons and his daughter received two ewes each, the bequest for most of Robert’s grandchildren,  and John’s oldest son received a young cow.

Robert Bent named two neighbors as “overseers” of the will–Henry Tuncks and Peter Noyes, once again emphasizing the closeness of the Bent and Noyes families.

John was a successful farmer, as was his father, Robert.  The book “Puritan Village” discusses tax rolls of the Parish of Weyhill. “(Peter) Noyes and (John) Bent were 4th and 5th in land holdings of 44 landholders (there were also 40 landless men).”

About the time that John Bent turned 40 years old, the people of the village were becoming increasingly unhappy with the reign of Charles I that started in 1625.  There must have been many long, soul-searching conversations, as they looked across the Atlantic at the possibilities of a better life in the new country where the first band of dissidents had landed in 1620. Unhappiness with both civic and religious constraints stimulated the Great Puritan Migration of the 17th century.

Peter Noyes, John’s friend, must have been one of the most adamant and outspoken about the necessity to leave England. John Bent, no longer a young man, had to decide whether to make the risky journey with young children, to leave familiar surroundings and a successful farm, to leave his widowed mother and his siblings, all for an unknown future.

Then King Charles decided to raise money. Ironically, these Englishmen whose grandsons would fight to separate America from England over tax issues, found tax issues pushing them to emigrate to America. As The Bent Family in America explains:

“A glance at affairs in England will show ample cause for a change of home at that time. The rule of Charles I had become almost unbearable, and it is not at all surprising that so many looked upon ‘the American wilderness as the only asylum in which they could enjoy civil and spiritual freedom.’ The King, advised in affairs of state by Lord Wentworth (Earl of Stafford) and in religious affairs by William Land, Archibishop of Canterbury, wished to do for England what Richelieu was doing at that very moment for France. ‘put the estates and personal liberties of the whole people at the disposal of the crown and deprive the courts of law of all independent authority,’ as well as to break up all gatherings of religious dissenters. He had already ruled nine years without a Parliament and his despotism seemed nearly complete. But one thing was lacking, and that was a standing army.”

In order to fund the army, the King proposed heavy taxes on the counties along the coast that profited from shipping. Hampshire, the home of the Bents, was one of those counties.

“England, to the outward eye, verdant, calm, and peaceful, but in reality on the verge of a political and religious volcano (The explosion came with the Civil War in 1642).”

A Decision to Risk the Trip

In the end, John decided to take the risk. His elderly mother, Agnes Bent, promised that she would consider sailing to America if Peter Noyes and John decided the conditions were good.  She entrusted £ 80  to Peter to help him finance the voyage and to look for land for her.

“[Peter] Noyes sailed from Southhampton on April 12, 1638 in the ship Confidence, taking 3 servants, his eldest son and daughter, and his neighbor, John Bent.”[/plain]

John and Martha brought with them five children ranging from two years old to thirteen years old.  At that time period, they would have been traveling on a sailing ship and would have been responsible for bringing along their own food which they prepared on board. It was no pleasure cruise.

The Confidence held 110 people–a large percentage of whom were servants. Perhaps most of the servants had indentured themselves in order to pay for travel. They would pay off the debt in a few years and become regular citizens. These were not impoverished immigrants dependent upon plantation investors from the old country. They had been leaders in their English communities and were well suited for building new towns in New England. The families on board were headed for various Massachusetts Bay Colony towns, but the Bents and Noyes and a couple of other families were going to Sudbury.

Since the Pilgrims had arrived in Plymouth in 1620, small towns had sprung up progressively reaching westward from the seacoast, so in that eighteen-year-span other people had started to build villages. Nevertheless, Sudbury lay on the edge of civilization, connected to other towns only by Indian trails and rivers traversed by canoe. Far from their mother land where the parish church was already a century or more old, the Bent family  now lived in wilderness, surrounded by natives who while generally friendly did not always accept their presence.

The year after John and Martha Bent arrived in Sudbury, his mother and sister set sail to join him.  My next story will deal with the story of the two Agnes Bents, but suffice it to say here that in addition to the five children that the Bents brought from England, they cared for one of John Bent’s nephew, Richard Barnes, for several years. Martha also gave birth to two more children–Joseph in 1641 and her namesake, my 7x great grandmother Martha, in 1643.

Two years after John arrived, he received status of Freeman in his new community, giving him rights to vote and help rule the town.  He settled in a part of Sudbury that is now the town of Wayland, building a house on a six-acre lot 1/4 mile from the Sudbury River. The following year, he served on a committee to assign timber to citizens. In 1648, the town fathers appointed John Bent as one of three men to “end small business under twenty shillings”, a kind of small claims court. The same year, leaders chose him to lay out the highway from Watertown to Danforth Farms (later Framingham), following the old Connecticut Path. Not everything that happened in 1648 was as happy. John and Martha’s oldest son Robert, died at the age of twenty-three. 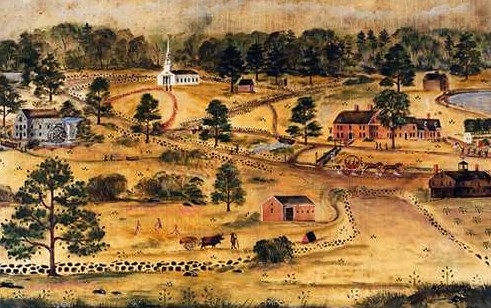 As his sons grew to adulthood, John helped them settle in other places, joining the petition to form the town of Marlboro (Marlborough) for the benefit of his son Peter in 1656.

In September 1672, at 76 years of age, John Bent Senior, wrote his will. He must have been proud of his life’s work, having accumulated wealth, mostly in the form of land, to pass on to his children and grandchildren. 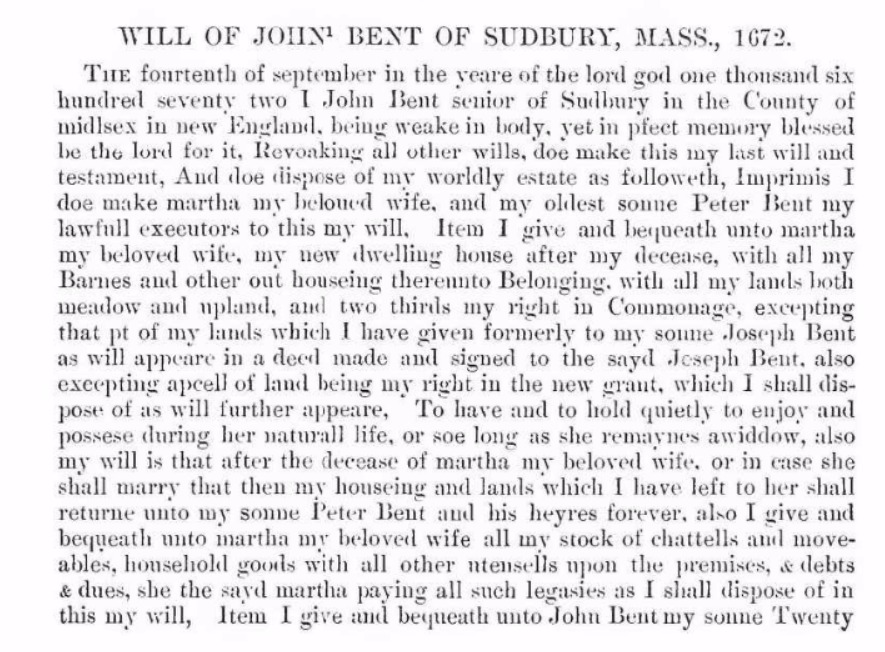 John Bent was buried in the Old Cemetery in Sudbury, Massachusetts.

John was spared the heartbreak of losing two of his sons later that decade. In 1675, as we learned in an earlier post, tragedy struck when Peter accidentally shot his brother Joseph, the youngest of the family. Three years later, Peter died while on a trip to England. And Martha Bent, John Bent Sr.’s wife, died in 1679.

John Bent, by coming to America in 1638 had founded a family that would spread across the country and even to Nova Scotia. In 1760 David Bent of Sudbury moved to Annapolis County, Nova Scotia, taking advantage of land that became available when the British expelled French Acadians  out of Canada. Four years later two other Bent families followed.

One of those was Lt. Col. Matthias Bent of Framingham, later a Deacon.  His daughter Abigail Bent wrote The Happy Merchant and Other Tales for Sunday School teaching. (Not timeless literature, it seems to have disappeared.)

One of those soldiers of the Revolution, Lt. Col. Silas Bent of Rutland, went to Ohio as one of the first settlers–thus probably a friend and neighbor of my other ancestors who traveled with Rufus Putnam–the Israel Stone family. Silas kept on moving west, moving on to Missouri. A 3x great-grandson of John Bent, Silas Bent was a judge of the Missouri Supreme Court in the early 19th century. 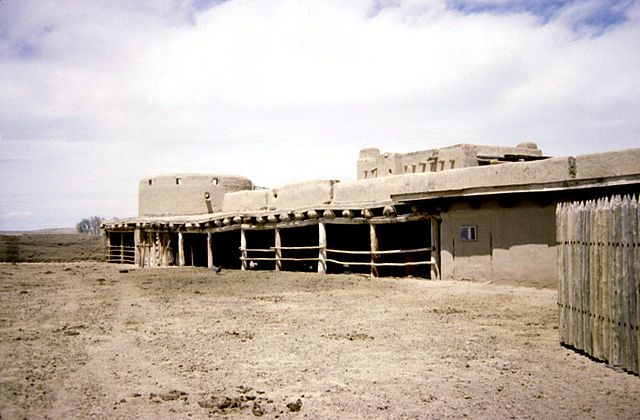 During the Mexican War, the fort served as a base for the troops of American General Kearney. General Kearney  appointed Charles Bent as Governor of New Mexico after the Mexican War. He served from September 1846 until soldiers of the Pueblo uprising killed him in January 1847. (For those keeping track, Charles is the 4x great grandchild of John Bent through Peter Bent. That makes Charles my 5th Cousin, 4x removed.)

Little did John Bent know when he left England, what a mark his family would make on America.

For a guide to all the stories I have written about the Bents, go here.