If I were going to make a trip to a research center specifically to look for Irish Ancestors, and could not afford a trip to their homeland, I would not think first of Arizona.

But these are all general resources, not libraries that specialize in Irish Genealogy.  For that, I only had to travel up the freeway from Tucson to Phoenix. I felt a bit like a prospector searching for gems of information as I arrived at the Irish Cultural Center and McClelland Library. 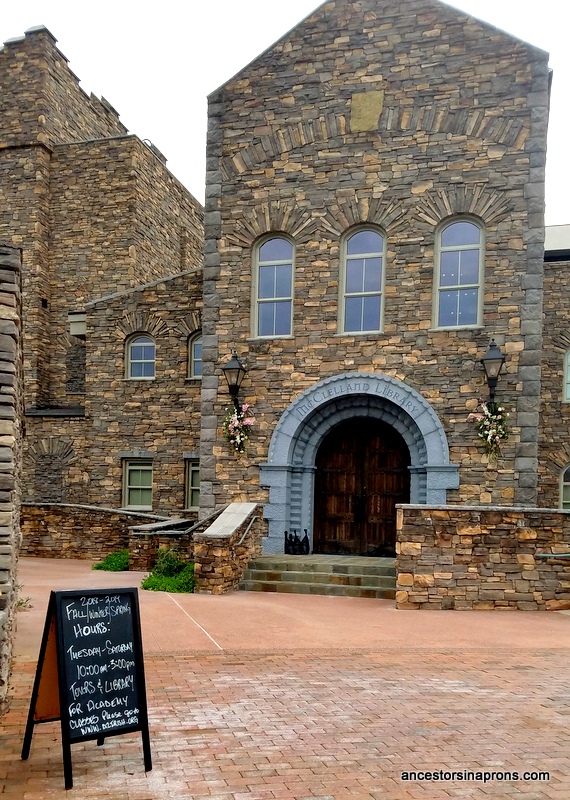 A Tour of the Irish Cultural Center

It was a cool and cloudy day when a friend and I visited the McClelland library at the Irish Cultural Center in Phoenix The weather added to the illusion that we were on a trip to Ireland. However, that illusion did not last long once we gazed out the windows of the castle, and peered between the stone “teeth” of the Castle Keep.  Instead of green fields and grazing sheep, we saw roofs of buildings and high-rise construction. The Irish Cultural Center’s buildings are located at the center of Phoenix in the Margaret Hance Park.

The stones used to build the buildings are authentically old and actually were imported from Ireland. And the “castle” and the “cottage” and “great hall” were built based on plans of a real Norman castle in the old country, but the structures date only to the 21st century.

You pay no admission charge, but we opted for the $5 tour led by a volunteer roughly ever hour on the half hour while the museum is open.  First we viewed An Gorta Mor (The Great Hunger Memorial). After hearing the history of the potato famine, we moved on to the cottage.  Irish farmers built a similar four-room stone cottage in the 19th century to house both family and animals.

Trivia: Did you know that the very first immigrant to enter through Ellis island was Annie Moore, an Irish Woman whose descendants wound up in Arizona? The link leads to an interesting debunking of the initial story about an Annie Moore that proved to be the wrong one.  (Sounds like some of our detours in genealogy research, doesn’t it?)  The tour guide tells the true story, illustrated on a display at the Phoenix Irish Cultural Center in the Cottage. 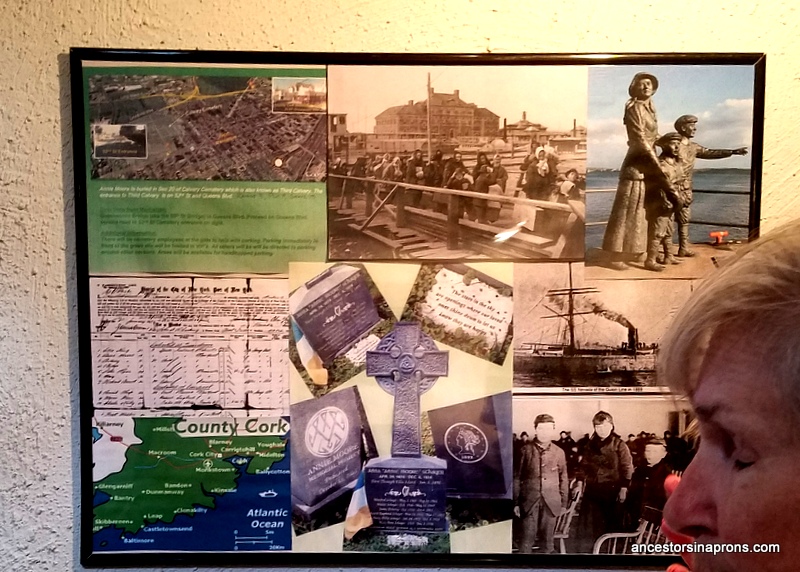 Display at the Irish Cultural Center in Phoenix about Annie Moore, the First immigrant into Ellis Island.

How Your Irish Ancestors Lived

After the cottage (which also contains the welcome center where you pay for tours and can pick up literature), we proceeded to the castle.  The well-stocked library (more than 8000 publications, including the genealogy collection) contains Irish literature of all ages and all types.  It includes Irish and Irish-American newspapers and other periodicals. Non members can utilize the library on a day basis, but members of the Cultural Center can check out books.  (The books belong to the Phoenix Library System and can be located in that on line catalogue.)

Another room on the main floor serves an exhibit hall, currently being prepared to show “Irish in Latin America.”

Next, we took an elevator to the 2nd level. There a small room houses a permanent exhibit of a gorgeous replica edition of The Book of Kells . Placards show information about the history of that illustrated 8th/9th century manuscript. The original resides in Trinity College in Dublin.

The main attraction on that floor includes banks of computers and books of family histories. We saw publications to look up Irish names and books like “How to find your Scots-Irish ancestors.”  Yep, you’ve guessed it, we were in the large, well-stocked genealogy library.  There is a small charge to use the library. One day a week that charge includes a genealogist to work with you.  I will doubtless head back up to Phoenix on a Thursday to delve into the most elusive corners of my Irish ancestors’ lives.  McCabes and Cochrans and Hendersons–I’m looking at you.

We didn’t visit the Great Hall where there are Friday evening Ceilidhs (Irish song and dance night), and various other activities.  The Cultural Center offers a wide array of opportunities  to learn about your Irish Ancestors. Choices range from an upcoming day-long Genealogy workshop to a six-week genealogy research class and instruction in the Gaelic language. [The one-day genealogy class scheduled for Nov. 17 sold out quickly, so classes must be very popular.]

The opportunities to learn about the history of Ireland and other subjects that help bring your ancestors to life make the Irish Cultural Center a real gem for researchers.

What remote gems have you found for research?