Don’t the women in their Edwardian summer outfits look like they are having fun?  Grandma Vera Anderson was a member of a club that organized cultural events for the town of Killbuck, bringing in plays and lecturers. But they obviously had some fun, as well. This picture is taken in front of a hat shop, run by Node Nelson, the woman standing with her arm raised in front of the porch post. You can barely see hats in the window on the left. 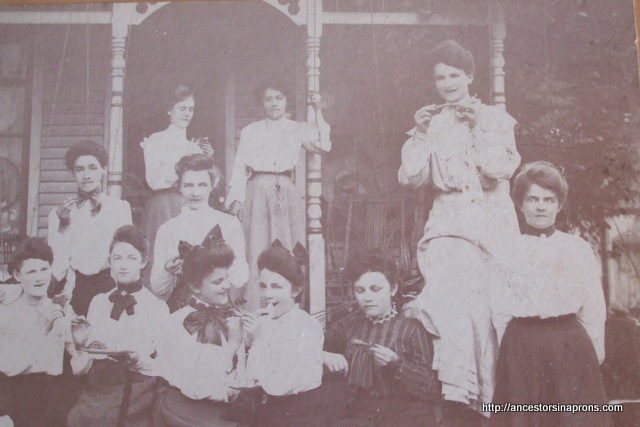 Every vintage recipe for roasted chickens that I have read in Joy of Cooking or even in the Betty Crocker Cookbook from the 50s are pretty basic:  Fill the body cavity with some dressing, slather the outside with butter, and put in a 350 oven until it is done.

My Grandma Vera n had a large electric roasting pan, but I don’t recall that she did anything complicated with her chickens.  However, I wanted to see if there was a different way, and so I once again turned to the Buffalo Evening News Cooking School Cook Book. 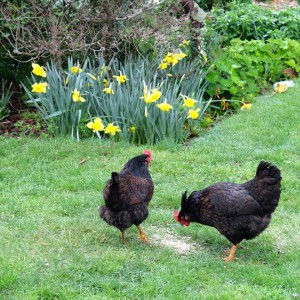 Chickens in the backyard of the Frugal Kiwi, found at http://frugalkiwi.com

I found a treasure.  Before I got to the recipe, I read through their description of how to deal with poultry and game.  Some of it is basic advice that few people these days know about–how to pluck a chicken, how to judge the quality of the bird, how to cut up a fowl.  Some of it is quite surprising.

…it should be thoroughly washed inside and out, (Read this article for a modern alternative view on washing chicken) and if there is an unpleasant odor form the inside, rub it with a little cooking soda.  If the odor disappears quickly the bird is good to eat. If the odor persists it is best to cut the bird open to see whether there are any bruises or recognizable bad places.  A fowl that ha a bad odor had better not be eaten.

Well, yeah, if my chicken stinks, I don’t think I’ll eat it. But how about this advice?

All game is best in the winter and should never be eaten in the spring.  At that time of the year the broiling chickens are better and can be prepared in such a variety of ways, that there is no need of any other fowl.

I guess it doesn’t really matter since I don’t eat a lot of pheasant or quail, or even duck , but I imagine some restaurants might be surprised at the advice.

The smooth legs of a fowl less than a year old may be used. Scaled with boiling water and skin and claw cases will peel off like a glove.  Place in cold salted water and cook slowly.  Three pairs of chicken feet will make a pint of jelly as fine, and just as nutritious as calf’s foot jelly.

Well, it is certainly good to know what to do when you run out of calves’ feet, isn’t it?

Okay, I’m being a little sarcastic about these dated (from 1925) instructions, that address a cook whose fowl and poultry came directly from the farm or from her back yard instead of from a chicken factory.  But on to the vintage recipe for roasted chicken, which is really superb. (Their fried chicken recipe sounds great too, and I’ll try it one of these days.)

Here’s the roasted chicken recipe just as it is in The Buffalo Evening News Cooking School Cook Book, and then a few of my notes.

Dress, clean, stuff and truss a four-pound chicken.  Rub with salt and pepper and place in roasting pan. Rub into a paste three tablespoons of butter and two tablespoons of flour and cover breast and legs with it.  Dredge bottom of pan with flour. Place in a hot oven and when flour is browned, baste with one-fourth cup of butter melted in one-half cup boiling water. Reduce oven heat and baste every ten minutes until chicken is done.  If water dries from the bottom of the pan add more.  A four-pound chicken requires one and one-fourth hours to roast. (For stuffing see below).  [A recipe for gravy follows, but I skipped the gravy.]

The end result was absolutely the juiciest roasted chicken I have EVER eaten.  I know when I roast chicken and turkey, in order to avoid the breast getting dried out or too brown, I cover the bird with foil in the last half of cooking, or I start it breast down and turn it over entirely during the cooking. However, the flour/butter paste serves to protect the top from browning too much and holds in the juices.

Have you ever cooked chicken this way?  Or seen it done?  And how about the chicken-feet jelly??