Erasmus closed his last letter saying, “The taters are ready.” He has requested that Suzi plant some sweet potatoes because he loves these sweet taters.

While the soldiers were simply peeling and boiling their sweet taters, when they got home, their wives would be more creative with sweet potatoes. For clues, I looked up some 19th century cook books.

From Gutenberg Project, you can obtain this historic cookbook: Domestic Cookery, Useful Receipts, and Hints to Young Housekeepers, by Elizabeth E. Lea (1850’s) and learn how to be a proper mid-19th century housewife.

“To boil sweet potatoes, put them in a pot with plenty of water; let them boil fast till you can run a fork through the largest; then pour off the water, and leave them in the pot a quarter of an hour; you can then peel the skin off or leave it on. Some prefer them baked in a dutch-oven; they should have a quick heat; large potatoes will take an hour to bake. It has been found a good way to boil them, till nearly done; then peel and bake them; they are drier and nicer. ” This excerpt comes from Vintage Recipes.com

Recipes from another early cookbook, The Virginia Housewife:

Wash and wipe them, and if they be large, cut them in two lengths; put them at the bottom of a stew pan, lay over some slices of boiled ham; and on that, one or two chickens cut up with pepper, salt, and a bundle of herbs; pour in some water, and stew them till done, then take out the herbs, serve the stew in a deep dish. Thicken the gravy, and pour over it. This excerpt from Vintage Recipes.com, which no longer is alive.

A Novel Use for Sweet Taters

In the South, the Union’s blockades kept them from getting a supply of coffee, so they conjured a drink out of many different foods.

“To prepare sweet potato coffee we pared the potatoes, cut into small bits, dried and parched, adding a little butter before taking from the oven and grinding. Tubers, like carrots or yams were cut into small pieces, dried, toasted and ground up.”
From the Cape Fear Civil War RoundUp.
Sweet Potato Pone

Add to the mashed potatoes instead of flour sifted corn meal. Melt the lard and wet up with boiling water. Leave the dough very stiff then break into it one at a time two fresh eggs. Work them well through the mass. Take it up by small handfuls, toss them from one hand to the other and flatten them lightly around the sides of a hot baking pan very well greased. Bake quickly until a crisp brown crust forms on top and bottom.

I tried one below, Sweet Potato Pudding.  My comments follow the recipe. 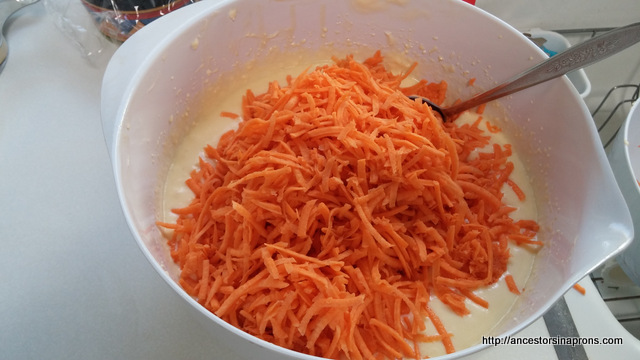 Shredded sweet potatoes ready to mix in to the batter.

Peel and grate your sweet potatoes upon a very coarse grater. To a quart grated, take six eggs, a large cup of butter three heaping cups of sugar, a cup of cream, a cup of milk and the juice and rind of a lemon. Beat the eggs very light with the sugar and butter, then add the potatoes then the milk and cream a little at a time. Put in the lemon rind — grated — and the juice last of all. Pour the mixture in a deep dish and set in a hot oven. When it has crusted over the top, stir the crust down so another may form. Do this twice. Serve very hot with plenty of wine sauce.

I tried the recipe, substituting half and half for the milk and cream, reducing the milk, and using orange rind and juice rather than lemon. I didn’t happen to have a lemon, but besides, I like the combination of orange and sweet potato flavor.  The ladies of Salt Lake at this period would probably not have had oranges, though.

I said a little ‘thank you’ frequently as I prepared this recipe. For my vegetable peeler instead of a paring knife to peel the potatoes; for my food processor to grate them; for my electric mixer to mix the eggs, butter and sugar instead of having to use a wooden spoon; and for my electric oven which I can (almost) count on for a steady temperature and never have to add a stick of wood to. 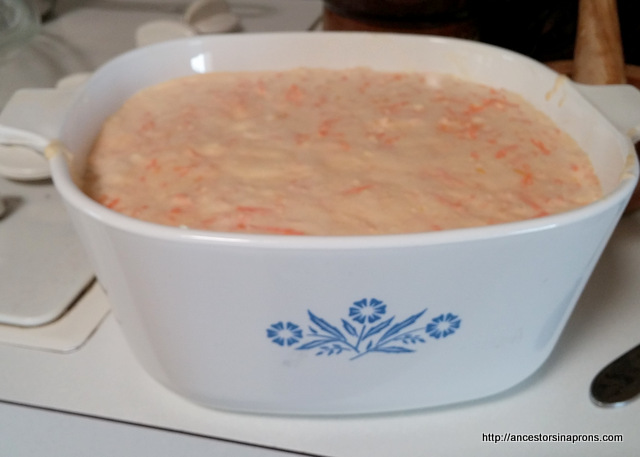 This recipe makes a very big bowl of tater pudding, as you can see.  However, you don’t need to allow for headroom.  It does not rise like a souffle. 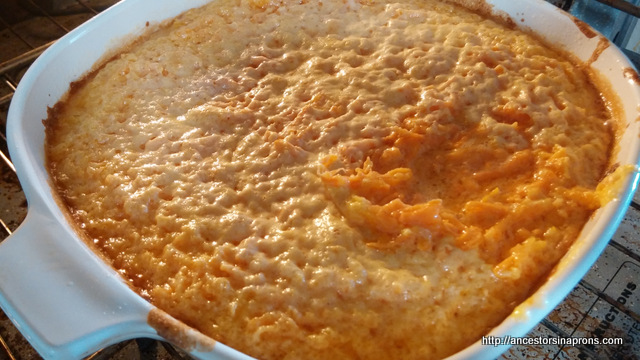 Stirring down the crust of the sweet potato pudding

Since the original recipe does not give a baking time, I had to guess when to stir the crust down. I translated “hot oven” as 425 F. The crust did not brown, just began to get thick while the pudding below was still liquid.  I stirred it down at twenty minutes, forty minutes. And took it out at 60 minutes. 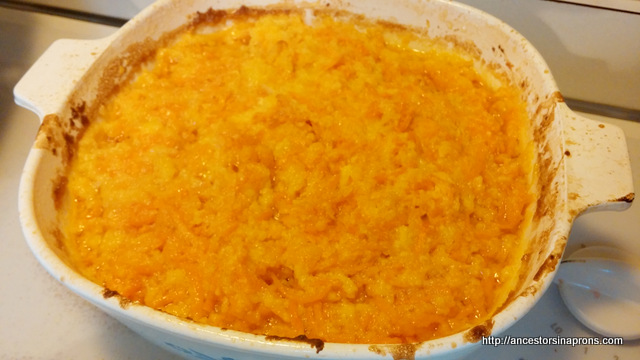 The tater pudding tasted good except that it was waaaay too sweet.  And when the pudding stood for 20 minutes or so (at room temperature), the liquid separated out.

After making the recipe, I compared this 1898 version to the 1960s edition of Joy of Cooking’s sweet potato pudding and found the proportions to be very similar. The biggest difference in ingredients was that “Joy” would use 12 egg yolks and 4 egg whites for this amount of pudding. AND instead of baking in a  “hot” oven, they use a low-moderate oven–325 degrees.  That difference in heat could explain the separation. By the way, “Joy” used orange juice, just like I did.

Although my experiment with the 1898 sweet taters puddin’ did not work out, I think it is worth trying again. Next time I’ll definitely reduce the sugar and lower the temperature. Let me know what adjustments you make if you decide to try this sweet tater pudding.