Today I talk about the contrasting experience of two brothers, one who died and one who was captured and spent a year as a prisoner of war, but returned to live out his life at home. 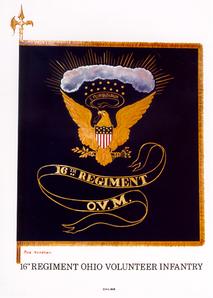 You may have read the letters of Erasmus Anderson, my great-great uncle who served on the Union side in the Civil War and died at Vicksburg.  In his letters, he sometimes refers to his younger half- brother Will (William McCabe Anderson), who was also a soldier. For a time the two served side by side as their respective companies marched together as part of the 16th Ohio Volunteer Infantry. William’s obituary hints that he was imprisoned at the infamous Andersonville, and I wanted to get at the actual story of his service and his time as a prisoner of war.

Will enlisted in the army one year earlier than his brother, Erasmus. He was twenty years old and unmarried when Union patriots in Ohio began staging giant rallies to encourage enlistment.  Young Will, who was listed on the census of 1860 as a farm worker on his family farm, did not have any specific plans for his life, and no doubt the war sounded like a great adventure. On September 12, 1861, Will signed up in the same regiment that his brother would later join–16th Ohio Volunteer Infantry (16th OVI). William was in Company B, made up entirely of men and boys from Monroe Township of Holmes County.

After gathering at Camp Tiffin in Wooster, Ohio during September and October, the new recruits were loaded onto trains and traveled by rail to Cincinnati’s Camp Dennison. (Follow the link to see two pictures from Camp Dennison.)

I have no letters from William, so have to depend on the newspaper report of the OVI 16.  Captain Theodore D. Wolbach wrote about the Regiment twenty years after the fact.  These wonderfully detailed accounts, published in the Holmes County Republican newspaper under the banner “From the Field” covered every movement of the regiment from 1861 until the surviving soldiers mustered out in 1864.

Not only does Wolbach fill in the details of the battles, but he also gives us sometimes hilarious and sometimes devastating descriptions of the everyday life of the Union Soldiers.  We are fortunate to have those articles, accompanied by additional battle maps, photographs and reams of information on OVI 16 at the website maintained by Michael Wood. I used that website for extensive research while I was writing about Erasmus Anderson, and will not repeat all of the information here.

The Making of a Soldier

In mid December the recruits traveled by boat , railroad and foot to Lexington Kentucky, where they stayed until mid January 1862. ( The beginning of many ‘hurry up and wait’ orders for this regiment.)

During the last half of January, the new recruits were broken in with daily marches of varying lengths, and Wolbach reports several days that they marched all day in the rain. When they arrived at Camp Duncan in Pulaski County, Kentucky (the area called The Wilderness), they spent ten days waiting. After all that marching, this break probably was quite welcome.

More marching through February, until they engaged in their first big battle–the campaign to secure Cumberland Gap.  Will had now been in the army five and a half months, and the regiment saw its first casualty at the end of April, two more months into his life as a soldier. The Cumberland Gap operation took time, and was not firmly in Union hands until June 18, 1862. However, the Rebels did not give up and the Union army found themselves under siege at Cumberland Gap in August until by September 8 and 10, the commander’s order them to withdraw from a hopeless battle.

The now battle-hardened soldiers cheered the arrival of new recruits in October.  It is wonderful to imagine the enthusiasm with which the hardened, muddy, bedraggled Will Anderson welcomed his brother Erasmus, who had recently joined up. They had not seen each other for a year, and there must have been much catching up to do as the younger brother, now having gained the respect due to the tested troops, talked with his older brother whose feet were just beginning to toughen up from the long marches. Not only was this a family reunion, but the companies they belonged to were packed with men from Holmes County–men they knew well–had gone to church and school with–had harvested each others crops–and now were called upon to protect each other’s lives.

The day after Christmas, a steamboat took the troops to the Johnson plantation beside the Chickasaw Bayou. The battle that started the next day, the opening of the campaign against Vicksburg Mississippi,  was hopelessly difficult.  The 16th Regiment’s beloved Col. DeCourcey an Englishman who had volunteered service with the Union, did not believe his troops should have been given orders to make a suicidal attack on a bluff on December 29. The Southerners had brought in reinforcements and commanded the high ground  But General William Tecumseh Sherman was reported to have said, “We are going to lose 5000 at Vicksburg. We might as well lose them now.”

A Disaster for the Union

Sherman’s later report on the battle still rankled twenty years later when Wolbach wrote in the Holmes County Republican that he must correct the record.  It was not true that the men of the 16th were not up to the job and refused to follow orders to attack. Rather, they did everything they were called upon to do until they were pinned down by such devastating fire that they could not move.

By January 2, 1863 Sherman had decided further attempts were useless, and he ordered the troops to withdraw.

208 Union men were killed, 1005 wounded and 563 captured or missing. The South lost 63 dead, 104 wounded and 10 dead. It was a devastating defeat for the Union, and a warning that Grant’s plan to capture Vicksburg was not going to be easy.

William is a Prisoner of War

On January 5, 1863, Erasmus wrote home that he hoped that William was taken prisoner (rather than being killed.) He had no idea of the fate of his brother, who had been captured on December 29 and held in Pearl River Bridge camp, near Jackson Mississippi, where he was held as a prisoner of war until November the following year. The camp was built in and around a covered bridge. The prisoners of war were not allowed blankets. They could not build fires for warmth or cooking, or light candles because of fear of fire. Although that camp caused much illness and many deaths–probably including a lingering lung ailment for William,–the camp at Jackson was nowhere near the horror of Andersonville (Fort Sumpter).  See a sketch of the unusual setting here.

On November 10, 1863, the men who had been captured were released to join their comrades in Algiers, Louisiana  There, Wolbach reports, the men had a good time catching oysters and clams in the bays. Perhaps William survived because he was young and used to hard living.

Surely Will would have written to his family, and learned from them that his brother Erasmus had died at Vicksburg May 22, 1863, five months after Will’s capture. Sad news to follow the joy of his own release from the prisoner of war camp.

I lose track of Will’s wartime path at this point, although I know that some of the men who had been held as a prisoner of war were given a furlough and rested at home for some months before returning to their regiments.  I do know that Will continued to serve until the OVI 16 was dismissed on November 4, 1864.

Did he see further battles after being held as a prisoner of war? Did he join the enormous march in Washington D.C. to celebrate the end of the war? That I do not know.

I will write more later about Will and his life before and after the war.

Letters from Erasmus Anderson, from copies provided by a relative, published at Ancestors in Aprons.