A History of the Descendents of James Morgan of Groton, Connecticut includes an interesting story about John Morgan (1700) and his appointment  to Ensign.
(pages 38 and 39) His father, John Morgan ( 1667) joined a Puritan committee objecting to the appointment of his son.

Men in the militia company chose officers by election.  In October 1736, the N. East Company of Groton chose John as Ensign and Thomas Munford as Captain and William Williams as Lieutenant. The latter two were higher offices than Ensign.

The objections, by a committee of eight, including John’s father Capt. John listed “1st the two chief officers are young men of the Church of England, 2nd illegal votes were cast, 3rd the young men of the company were deluded with liquor. 4th Many dissatisfied will enlist in the troop. 5th the society is in difficulty on account of the church of England and they are about to settle a minister.”

Two things seem clear to me. John Morgan, appointed Ensign, was NOT a member of the Church of England. And while the committee worried about propriety, the main concern of the involved maintaining the control of their local Puritan church above all else.

The book goes on to explain how “settle a minister” has anything to do with the appointment of officers in a militia. The complex tale started when their former Puritan minister decided to join the “church of England” (the Episcopal church), and therefore was tossed out of the local Puritan church and community.  The replacement minister preached for five years and then he, too, decided to join the Episcopal church. For two years the community had no minister at all.  The community was about to install a new Puritan minister, but were still fearful that Episcopalians lurking in their midst might join with the military to execute a kind of coup overthrowing the status quo Puritan rule.

The General Court debated for several days and heard several witnesses before declining to accept the complaint, and confirming the appointments of the three young men.  The new minister proved satisfactory, and everybody lived happily, puritanically ever after.

One can only wonder about the conversations that must have taken place in the many Morgan households about this event!

Young John Morgan, proceeded to advance through the ranks of the militia, just as his father and grandfather had done. On 26 Sept 1738 his company made him a Lieutenant, and on 27 of September in 1844, the same company, now known as the 4th Company of Groton, named him Captain.

This Capt. John Morgan (1700) was my 1st cousin 6 times removed. His father Capt. John (1667) my 6th great uncle was the brother of my 5th great grandfather Samuel Morgan.

Next: Another Capt. John Morgan

A slight pause here, while I gather my strength from wading through all the John Morgans and the James Morgans to get to my 6th Great grand-father, Capt. John Morgan (1645)

Our New England ancestors were not familiar with blueberries when they first arrived, but they quickly adapted them to all their favorite fruit recipes.  Blueberries have never lost their popularity, and in fact we have now dubbed them a Super Food or Wonder Food–good for what ails you, or to prevent anything from ailing you. So credit the beautiful blueberry to keeping our ancestors hardy.

Of course, when I pour a basket of blueberries out on a cookie sheet and stick them in the freezer, and later pour the frozen berries into ziplock bags so I can bake with them all year long, I think of my English ancestor housewives who only had access to blueberries during the growing season.

Of course, like so many other things that helped them survive, those Puritan goodwife ancestors learned about blueberries and how to encourage their growth from the indigenous people who used blueberries to make a hearty trail food called pemmican.  With its mixture of bear fat, deer meat and berries, it sounds a bit like English mincemeat. The dried blueberries were used as a preservative for the meat.

Blueberries could very well have been featured at the original Thanksgiving Dinner in the form of an Indian cornmeal pudding with blueberries  called sautauthig.

When I go to the northeast, blueberries are one of the foods I look forward to finding in abundance.  In New Brunswick, Canada, my sister and I visited a roadside blueberry stand that sold all things blueberry. 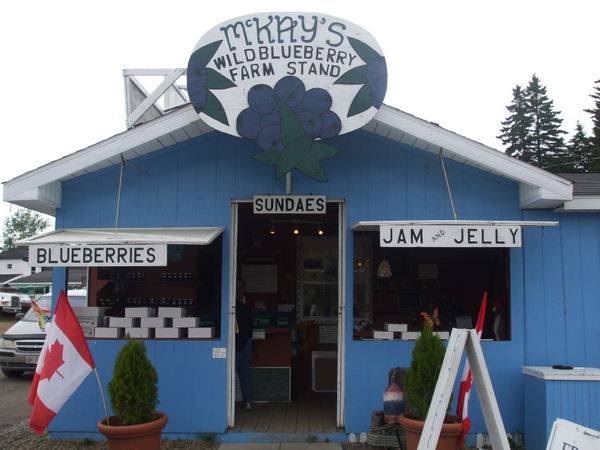 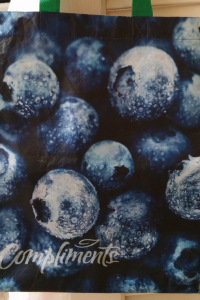 Canadians loves their blueberries, in fact we even picked up a free grocery bag to show our blueberry love.

We love them at our house, too, and I previously shared my recipe for Blueberry Buckle.

Here’s another recipe favorite.  I found this recipe for Blueberry Muffins many, many years ago, probably in a magazine or newspaper and it is superb.