What were the New Englanders eating during the Revolutionary War? And how did they celebrate the Fourth of July?

Although we associate fruitcake and cookies with Christmas, turkey with Thanksgiving, and cherry pie with Washington’s birthday, there is no one national Fourth of July dish. I propose Salmagundi.

[Aside: Ironically Salmagundi is an English dish, embraced by the Americans (as were many customs and foods) and even more ironically, given the enmity between Britain and France–it comes from a French word, salmagondis, which originally meant “hodgepodge” or “salted meats” according to who you believe.]

As to drinks, we know the colonists weren’t drinking tea–at least the tea imported from England.  Not only do we all know the story of the Boston tea party, but we now also know how important it was in the small towns to avoid tea. See the Resolutions passed by the people of Keene New Hampshire in the summer of 1776. They were, however, drinking plenty of ale and rum and other alcoholic drinks.

So, of all the lovely dishes that housewives were preparing over open hearths from vegetables grown in their own gardens and produce preserved with their own labors, why choose this one?

Okay, I just love the name. That is why I selected Salmagundi as a recipe to share with you to represent Revoluntionary War times. 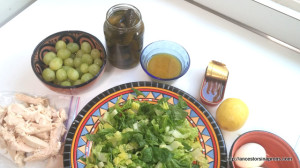 But I also like the sound of the ingredients of this hearty salad. Doesn’t it sound a lot like a Cobb salad to you, with the combination of greens, hard cooked eggs and chicken? For saltiness, Salamagundi has anchovies instead of bacon. No avocado, because they didn’t know yet about California. No tomatoes, because the colonists still thought they were poisonous. And a vinegrette instead of a creamy dressing. But still, some similarities, particularly in the all-around-the-refrigerator nature of the combination of stuff that goes into it.

[Aside: The Cobb salad was invented by Bob Cobb, owner of the Brown Derby restaurant in Hollywood,California, a place that was not even a gleam in the eye of our hearty New Englanders in 1776. Supposedly he was out of stuff to eat, and rummaged through the refrigerator for ingredients.]

The Recipe for Salmagundi 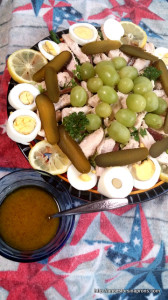 Here is the recipe as adapted by the Food History Site from several historic cookbooks. The quantities are suitable for one of those families with eight or ten children. Keep in mind that they are suggesting Salmagundi as a first course–eaten before the hearty food to come, like roasts.

For garnishing and augmenting, your choice of the following:

Shred the lettuce and lay on a platter. Cut the cold meat in julienne, slice the lemon thinly, dice or slice the eggs. Arrange the meat, lemon, and eggs on the lettuce. Add to the platter your choice of parsley, onions, green beans, grapes, watercress, pickled cabbage, gherkins, and edible flowers Mix vinaigrette and dress the salad with it, or serve the dressing on the side.

Some writers suggest different kinds of meat. One has pickled herring which I think I would like better than anchovies. I  adapted the recipe by making grapes part of the dish rather than a garnish (since most old recipes include grapes). When I made Salmagundi I skipped the onions, since I can’t eat them, and unfortunately I had to skip the edible nasturtiums frequently suggested by early cookbook writers. I simply couldn’t find any. But this recipe is more of a guideline than a prescription, and you can use whatever you find on hand–just as Mr. Cobb did at the Brown Derby.

My Downsized Version of Salmagundi 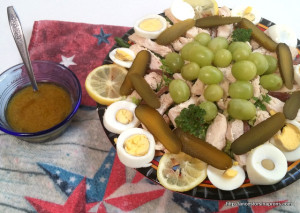 To Go with Salmagundi

If you want a dessert appropriate to celebrating 4th of July, Jumbles would do the trick.  Martha Washington’s jumbles sound an awfully lot like my Grandmother’s sugar cookies.

And perhaps a drink to celebrate Independence Day? How about Martha Washington’s Rum Punch?  After downing a few draughts of this half alcohol and half  fruit juice mixture, you’ll feel like taking on the Redcoats yourself.