PEARL HARBOR DAY: DECEMBER 7 Two days from now we mark Pearl Harbor Day. When the Japanese bombed Pearl Harbor on December 7, 1941, it changed the way Americans lived. And it made many changes in our family. Here are three men in uniform at Guy and Vera Anderson’s home in Killbuck, Ohio. 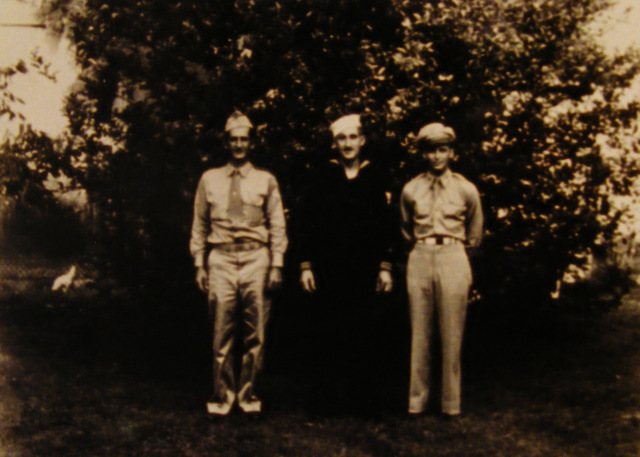 Men all over the country flocked to recruiting stations. Above is a picture taken in 1942 of part of our family’s contribution to the war.  My uncles Herbert Guy Anderson and William J. Anderson joined the Navy and were assigned to the Seabees. Both of them served in the Pacific, on small islands that we had never heard of before, and couldn’t find because their letters were heavily censored and we couldn’t get the name.s They liked to say that although the Marines claimed to be the first ashore on Pacific islands, the Seabees were there first, building the landing sites and airstrips.

The third man in the photo is my cousin Frank Fair, who was a pilot for the Army Air Force. The picture below shows another cousin, Donovan Anderson, grand-nephew of my grandfather, who joined the Coast Guard.  Not pictured is my cousin Robert Anderson, who also joined the Navy.  He and his father had at least one reunion in Hawaii during the war! Bob was actually too young to enlist–but that’s a story for another day. 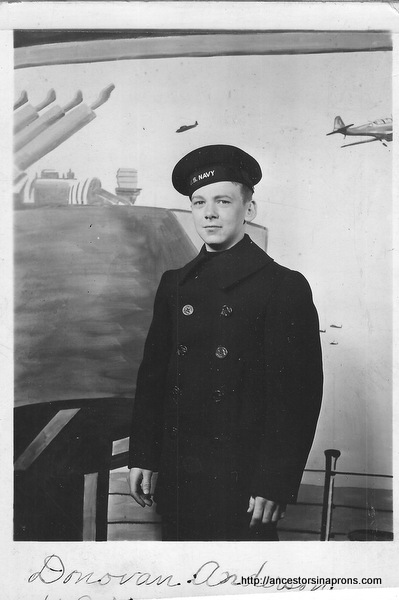 We were fortunate that all of these family members returned from the war with no physical damage.

On a less serious note, our Christmas Cookies were in danger because sugar was rationed, with the use of ration cards.

The life of civilians was affected by Pearl Harbor Day, too.  My mother and father and a three-year-old me lived in New Philadelphia, Ohio.  Dad had lost the sight in one eye as a child, plus he had a hernia, which was cause for his draft board to excuse him from service. But wanting to play his part, he walked the streets at night as an Air Raid Warden–watching for any light seeping out of windows during blackouts.  Even in New Philadelphia, Ohio, people were being careful that the Japanese or the Germans would not be able to drop bombs on their town because of someone carelessly leaving a light shining up to alert the bombers.

Perhaps the biggest change in daily life because of Pearl Harbor Day and subsequent events,  revolved around food.  I will devote an entire article (or maybe two) to that subject in the future, but for now, I wanted to share this World War II ration  book with you. 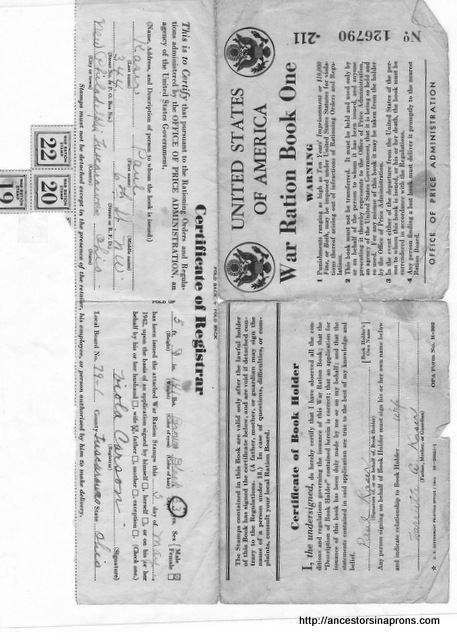 Mother went down to the Ration Registrars office on May 5, 1942 and got ration books for each family member–even the 3-year-old.  She signed for this one that is in my father’s name. There are three stamps left.

I learned from the Ames Iowa website (no longer current), that the ration books I have were the first issued after Pearl Harbor Day, and they were for sugar.

On the back of Paul Kaser’s ration book, the typed notation says “8-25-42 – 29# second half canning allotment.” (that doesn’t mean 29# of sugar, it means stamp #29 was used.) At any rate, even with rationed sugar, the Christmas cookies and birthday cakes kept coming out of the oven, despite Pearl Harbor Day.