First, let us get this out of the way. The English Muffin is NOT English. Samuel Bath Thomas gets credit for first making and promoting them as early as 1894, and the most famous English Muffin still bear his name. The American company, Bimbo Bakeries, now owns the brand, Thomas’.

When I saw a recipe for English Muffin bread on line, I was intrigued. When I saw how easy the creation of this bread would be, I got out the flour bin. I have made this great toasting bread several times now, and decided that even although it isn’t related to my English ancestors, I wanted to share the recipe with you.

By the way, in England, the “English” Muffins are simply known as Muffins, but in Ireland they are marketed at “American Muffins.” In England, you’re more likely to find crumpets on the menu than Muffins (English or otherwise), and in fact the baker who started the whole thing originally called them “toaster crumpets.”

One major difference between the two–crumpets contain baking soda which causes holes on top as well as inside. That makes the English Muffin Bread recipe more crumpet than muffin because it DOES have baking powder. This closeup shows that the English Crumpet(?) Bread has holes in the top.

I have always liked English Muffins, because of their main distinguishing characteristic–although they are smooth on the outside, holes cover the interior surface. Those holes provide little pockets to hold melted butter or drops of marmalade, jam or jelly. Mmmm, crunchy and soft and dripping with butter. Just think of strawberry butter dripping into all those holes! This bread mimics that characteristic of the muffin, like its cousins the English (or American) Muffin and the crumpet, I like it best toasted.

Thermometer. However, you will definitely be better off with a thermometer. Not only to measure the temperature of the liquids that you heat before mixing in, but also to test the bread’s degree of doneness. Don’t trust the looks of the outside crust, because when the outside tans, the inside may still be gooey.

The yeast. Note that the recipe calls for instant yeast which you mix in with the dry ingredients rather than regular/rapid rise yeast that goes into the liquid. Also, the recipe calls for one tablespoon of yeast. Unfortunately, that is ever so slightly more than one packet of yeast, if you buy your yeast in those strips of three small packets.

The cornmeal. While I have always used cornmeal when I made the bread, I did see some English Muffin recipes that call for semolina (Cream of Wheat will do the trick). Your choice.

So, on to the recipe. It really is simple. Only one rising that takes about an hour and a half. No kneading. (And if you have a bread machine, King Arthur Flour can give you a recipe for that, too.)

Once you’ve tried English Muffin bread, maybe you’d like to move on to English muffins. A search at King Arthur Flour will give you a recipe for them, also.

Don’t miss the total revision of my pumpernickel bread recipe. A German favorite, this bread gave me problems when I first baked it. After several tries, I have some helpful hints so you don’t have to go through the same learning process I did. 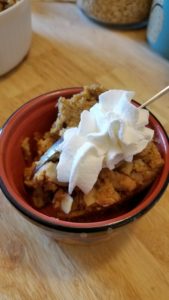 Tired of Pumpkin Everything?

Thanksgiving is coming at us fast.  Along with all the traditional recipes, I like to find something new every year.  Here’s a dessert recipe that gives pumpkin a rest. And really, aren’t you about ready to scream if you hear pumpkin-flavored anything one more time?

Pssst!  Don’t tell the traditionalist, but I liked it BETTER than the very similar pumpkin dessert.

I love acorn squash. Spit them, take the seeds out, put honey and butter and nutmeg in the center–and maybe some sliced apples or applesauce, and bake them in a dish with some water in the bottom. But how about an acorn squash dessert?

Unfortunately, my husband does not share my appreciation of this long-lasting winter squash.  When I serve him a wedge of acorn squash, he scoops out a shallow spoonful, but leaves a good 1/2 inch in the shell.

And he does not have seconds.

So if I bake acorn squash, I’m going to have leftovers.  And you know my opinion of leftovers, don’t you?  MAKE SOMETHING WITH THEM.

Which led to a quest for a good recipe for acorn squash pudding.  Along the way, I found the site, Historic Foodie, and this article on how early Americans used squash. Another article at the same site lists  all the squashes common in various parts of the country in the 17th and 18th century. (Acorn was known, but not common.)

Most recipe sites wanted me to make a pie out of the squash, but I was feeling lazy and just wanted to baked a pudding.  However, when I found a recipe for a streusel-topped acorn squash pie, I knew I had to try it — minus the pie crust. You can also just pour it into a pre-baked pie shell for a substitute for pumpkin pie. Simple and absolutely DELICIOUS!

My husband, the acorn-squash avoider is eating it up! 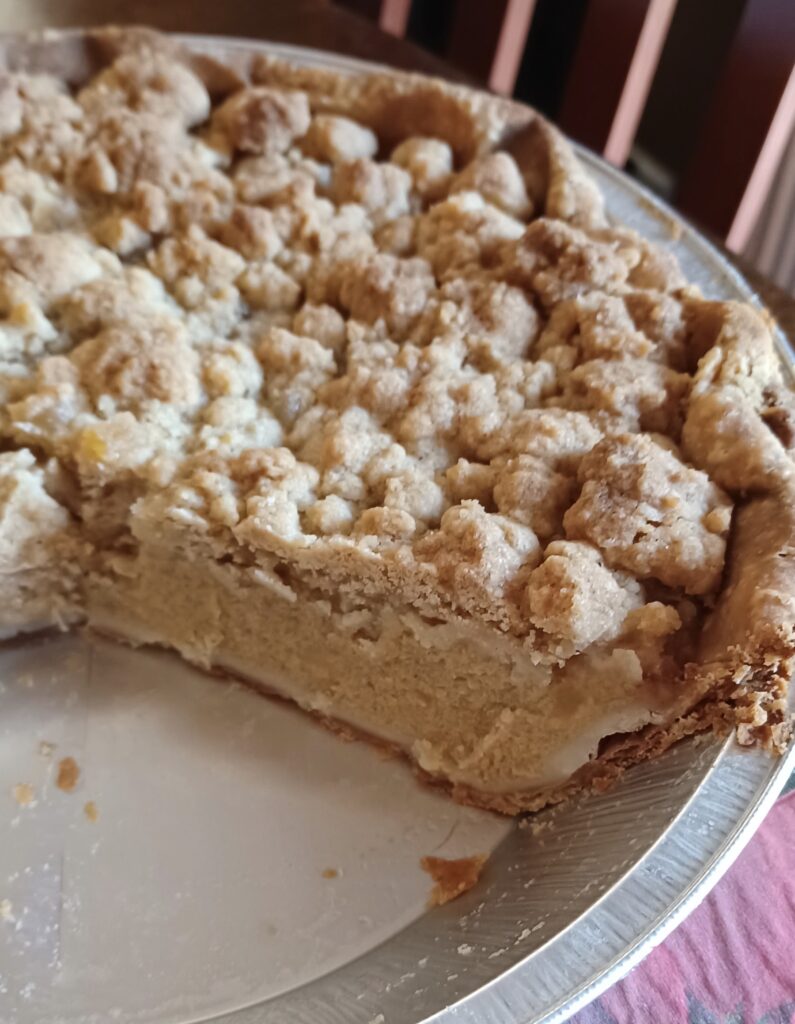 Just add the mixed pudding ingredients to a pre-baked pie shell, bake for a while, add streusel,topping with ginger, and finish baking. Specifics at end of pudding recipe. 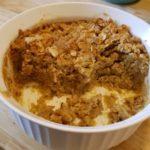 SPICES:  You can use pumpkin pie spices or blend cinnamon and nutmeg.  I used a lebkuchengewuerz spice recipe left over from making the German Christmas cookies. ACORN SQUASH PIE: To use this recipe in a pie, mix pudding ingredients and pour into a pre-baked pie shell. Bake 25 minutes at 375 degrees, then add streusel and bake another 25 minutes, tenting the top with foil if necessary to keep it from getting too brown. For extra Oomph, add 1/4 cup finely chopped candied ginger to the streusel topping.