Most kids love to cook. Once when I was a Cub Scout den mother, I asked the boys whether they would rather do a science experiment or cook something–cooking won by a landslide.  This recipe for Chocolate Swirl Bars meets the kid-friendly test.  The measurements allow you to work a bit on math if you want.  Relatively few ingredients means it is easy to mix up.  And best of all, they LOVE the action of swirling the chocolate into the peanut butter dough. 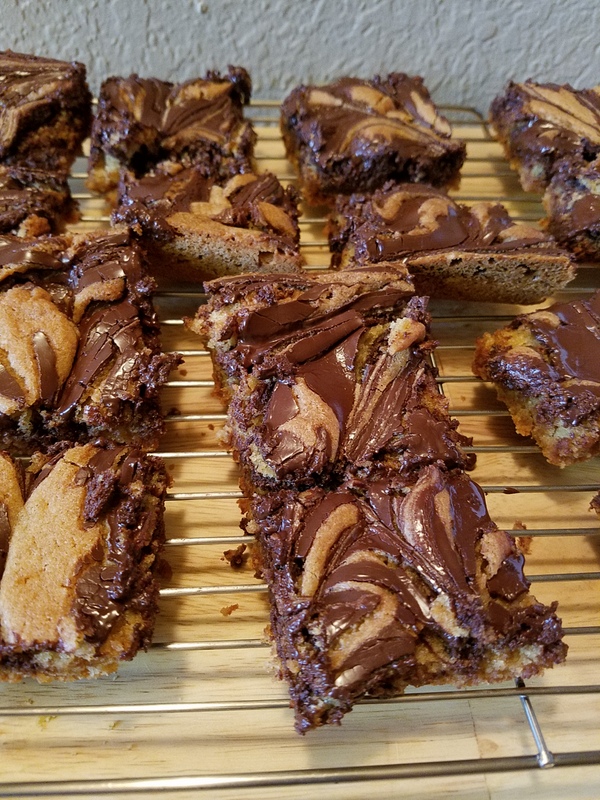 Note: If you’re making chocolate swirl bars with grandchildren or a group of kids, be sure to check for peanut allergies before you start. Unfortunately, one of my grandsons and one of my great-grandsons would be unable to eat these.

I know they are popular with kids, because my youngest son started making them when he was in eighth grade.  He liked making the chocolate swirl bars, and turned it into a business.  We discussed the cost of the ingredients, which he had to figure out and then return to me from his earnings.

The inspiration for starting a business could have come from Junior Achievement–a school program that helped kids in high school start their own business.  His older son had quite a company going, supervising a group of kids who made macrame’ plant hangers back when macrame’ was all the rage.

At the time, my husband also acted as an advisor for a J.A. group at another high school.  I still have a spatter guard for a skillet and a hamburger press, both made by teens, as reminders of those projects.

But COOKIES! A much better business, in my humble opinion.

My son baked a batch and took small samples of the cookies door to door in our neighborhood, fed them to the neighbors and took orders for a dozen cookies.  I don’t know how long before his interest flagged, but it may very well have been the beginning of a lasting talent in salesmanship.

Whether you cook them yourself, or find some kids to do the baking, you’ll find that the only problem with these chocolate swirl bars is waiting until they are cool enough to come out of the pan. The smell is heavenly. The taste likewise. Can you eat just one? 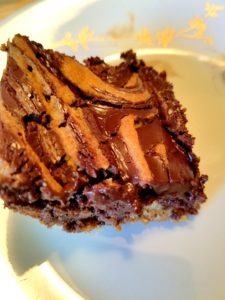 You can use either semi-sweet or dark chocolate chips and either smooth or crunchy peanut butter in these delicious cookies.  Kids love to make them and get creative with the marbleing.

Way back at the end of 2015, I made some picalilli.  Somehow in the rush of Thanksgiving and Christmas that year, I did not share the recipe with you.  I apologize.  Of all the things that Grandma Vera Anderson preserved, I most yearn to have the recipe for picalilli. Alas, she probably just threw together whatever vegetables, in whatever amount she harvested, and no recipe remains.

And what is picalilli? It’s origin seems to be India via England. The inclusion of turmeric provides a big clue to Indian origina, as turmeric is a must in Indian cooking.  I have included some links to more information down below, including the puzzle of  the difference between picalilli and chow-chow.

Although I do not have Grandma’s recipe for picalilli, I think I came up with a pretty fair approximation, after scouring old cookbooks and the Internet. Just keep in mind, this is a pickle made at the end of the growing season, so she might well have included other “leftovers” from her garden. 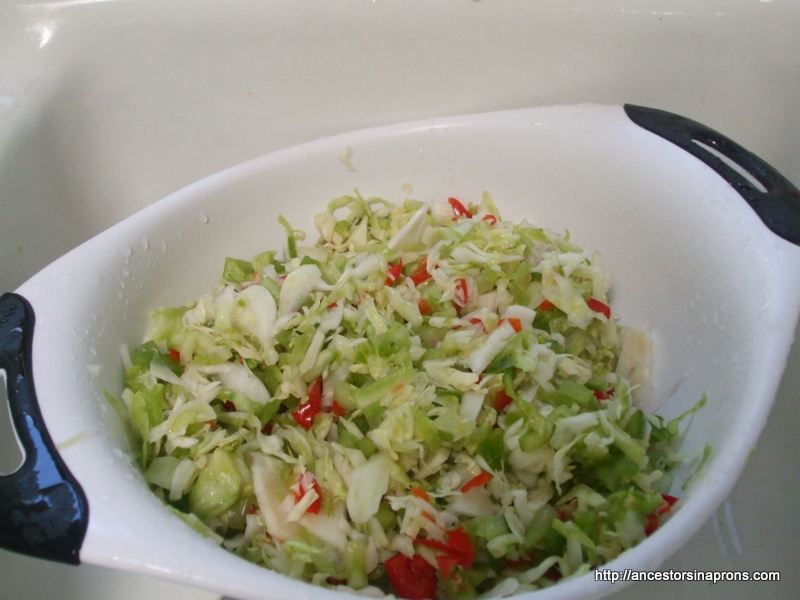 Cabbage,green tomatoes, red bell peppers, green bell peppers ( which Grandma called “mangoes” in a 1943 letter), sugar and spices. Recipes call for onions, which I can’t eat. I thought the picalilli was fine without them, but feel free to add them if that is important to you.

This recipe comes from the Ball canning site.  I highly recommend this site if you are a novice at preserving and canning, as I am.  The Ball people have been providing the jars and lids and advice for generations, so you can find answers to your questions about what to do if you don’t have a canning kettle, how long you can keep things preserved for refrigerator rather than canned under pressure, and how to prepare your jars and lids.

A note on Ball canning jars.  Mason jars, invented in 1858 by John Mason, are the style of jar that Ball manufactured in Buffalo, New York, starting in 1884. Do you own some old Ball jars? Learn all about dating Ball jars at this website.

I deviated from the recipe by leaving out the onions, substituting ground giner for grated ginger root, and and I did not boil the filled cans for long shelf storage.  Instead, I sterilized the jars and kept the product in the refrigerator for not over two months.

If you do not have half pint glass canning jars, you will need six or seven of them.  Do not reuse the two-part canning lids.  You can find the lids and jars in most grocery stores, and in Walmart.

Another thing you may not have on hand is cheesecloth–needed to make a spice bag. That also should be available at your grocery store. 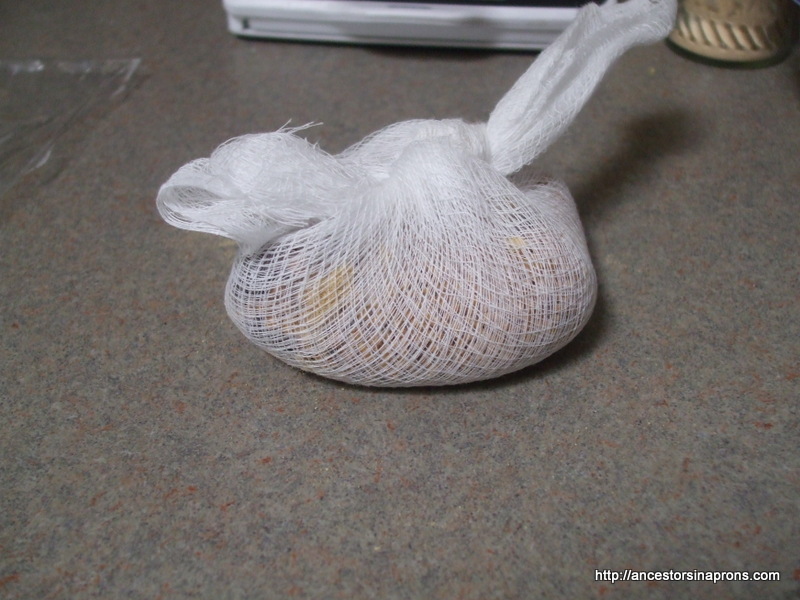 Pickling spices are available in the spice section of your grocery store. (That’s the pickling spices in the blue-lidded container.  The other round beads are the mustard seed. If you’re lucky, you’ll have access to a store that sells spices and herbs from bins, so you can get the small amount you need–only 1/4 cup. 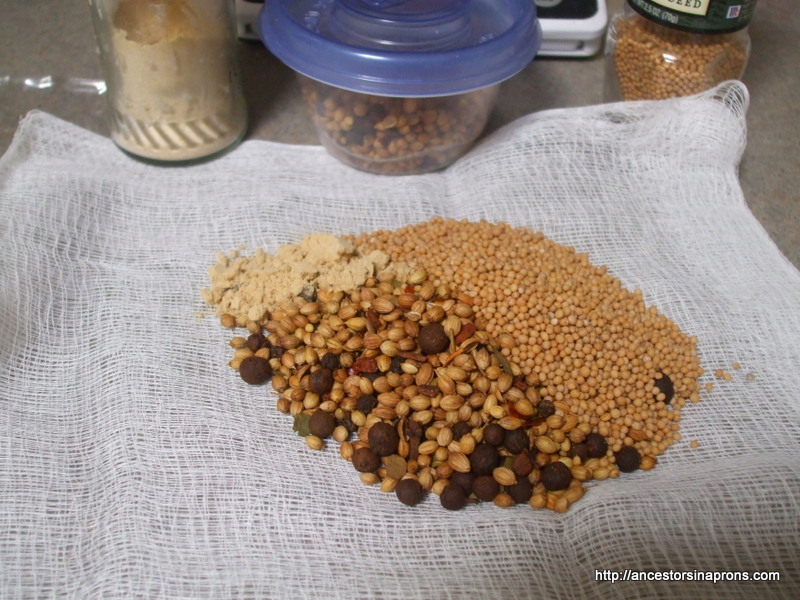 Everything else in the recipe should be easy to find. 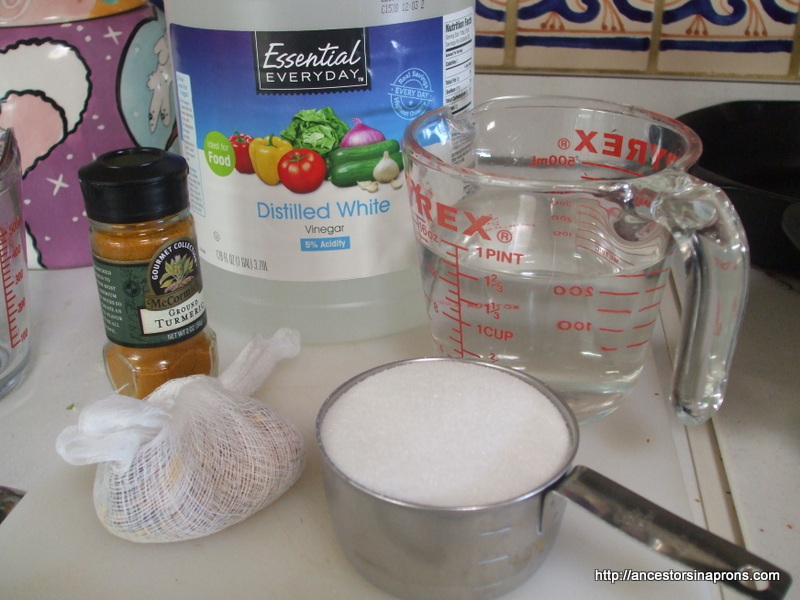 By the way, Grandma also made something she called chow-chow, and I have no idea what was in it or how it was different.  I vaguely relate it to pickled corn, but I am not sure about that. Anyhow, here is more information about the varous pickles and chow-chow. Notice how close the Philadelphia Pickle is to my recollection of Grandma’s Picalilli. And a second article from the same site, has several Chow Chow recipes that sound suspiciously like Picalilli. 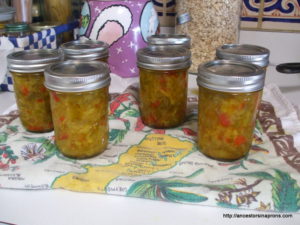 The origins of picalilli are mysterious, but Grandma Vera Anderson made it from the last of the vegetables in her garden.

Onions are optional. In fact all the vegetables are interchangeable in picalilli.  Tumeric gives the pickle a distinctive yellow hue, and a hint at its Indian origins.

Have you eaten or made picalilli or chow-chow?  What were the ingredients? I’d love to know if they differ in various parts of the country.

Are you looking for some Thanksgiving basics, or maybe some new ideas, like root vegetables?

and my most popular recipe ever:

Today, I offer a quick recipe that would work on the Thanksgiving table,in addition to the reminders of earlier Thanksgiving recipes.

Our grandmothers would have loved this one, because in the middle of the winter, vegetables were scarce.  Poking around the root cellar, they might find a colorful array to brighten the table. 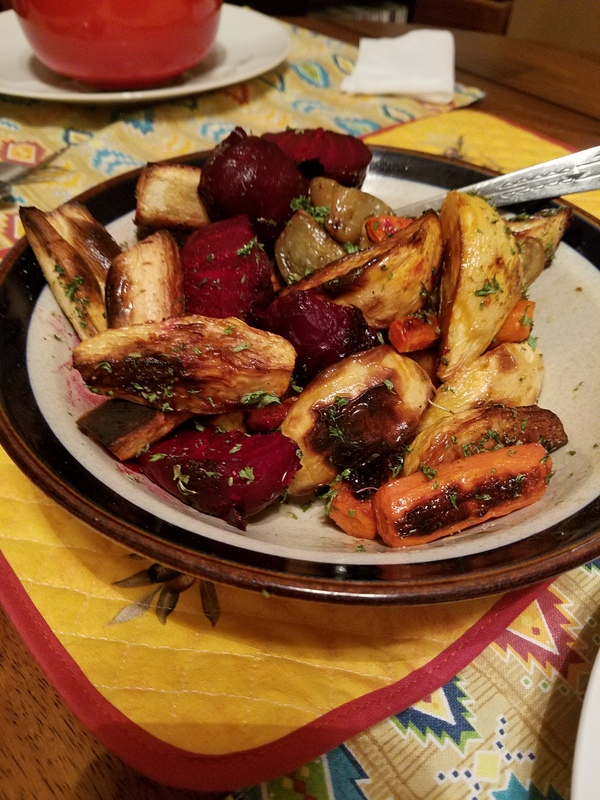 For this dish, I used one parsnip, two rather small rutabagas, five medium carrots and four beets. I peeled or scraped off the tough outer skin on each, cut the rutabagas in quarters and the parsnips in 2″ sticks.  The beets were smallish, so I left them alone.  The idea is to try to make the longer-cooking vegetables smaller, and the quicker cooking ones a bit larger.

I mixed the rutabagas, parsnips and beets with a tablespoon of olive oil, and put them on an aluminum-lined cookie sheet.  The carrots went in later, since they were thin and would cook fast.

I set the oven at 400 degrees and baked the vegetables for 20 minutes, then pulled out the pan and added the carrots and turned all the vegetables on the pan. From here on, you just need to stick the root vegetables with a fork every 5 minutes or so, and start removing the ones that are done. (The fork goes in easily.)

When the root vegetables were all heaped in the serving dish, I sprinkled garlic salt over them, and scattered dried thyme and parsley over the vegetables.  The top of my stove stays hot when I’m baking, so the dish stayed warm. If that doesn’t work for you, you may want to pop them in a microwave for a minute or two just before serving.

(By the way the green-ish wedges are some Japanese eggplant pieces that I had left over.  I happen to like them, but they definitely are not root vegetables, so feel free to ignore them.)