The questions Who,What,Where,When,Why and How are known as the journalistic questions, but they cover pretty much and research questions you might have.  In genealogical research, the why may be the most enticing and the hardest to find answers for, but who, what, where, and when rank as essential.

Several people commented to me and expressed some curiosity about how the pieces came together to show my great grandmother’s connection to an Archbishop who became famous in a novel. 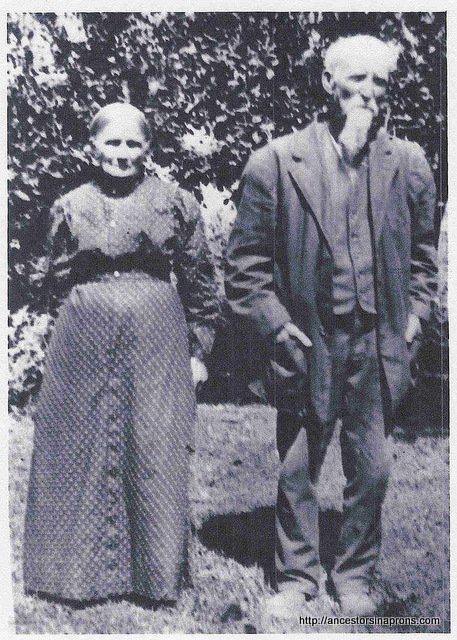 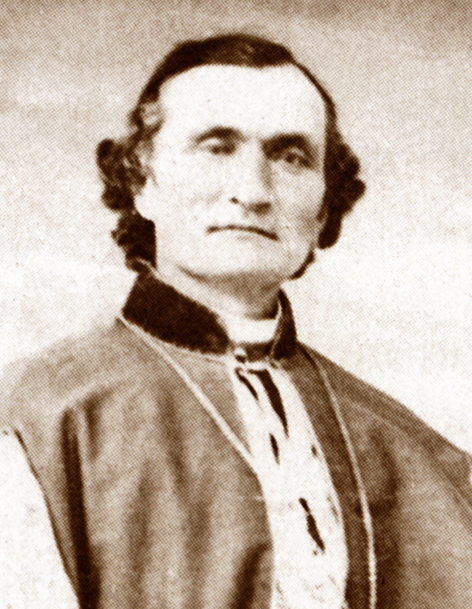 Jean Baptiste Lamy, taken in 1860. From the French Wikipedia site.

Because some readers were curious about the research path, I decided to do a rare “behind the curtain” look at where the stories come from that I tell on Ancestors in Aprons.

After all, that Archbishop, Jean Baptiste Lamy gained some fame serving in New Mexico, and my great-grandmother, Anne Marie Smith (Butts)  never left Knox County, Ohio.  So how did he get into the story? And how did I find him?

Who is Ann Marie Smith (Butts)?

First, I have to inventory what I know.  I’ve been doing research (of various types) for a long time, so I no longer feel a need to write down a list of “things I know” before I start asking research questions.  However, with my genealogy research, a timeline makes the skeleton I build on.

In creating a timeline for Ann Marie Smith (Butts), I relied on the usual paper trail– birth or baptism records, census reports, death information (if no death certificate, Find a Grave provides clues and a photo of a gravestone is more solid evidence, family Bibles shine.) But with Annie, I had the advantage of some background from family members.

My father had written a bare bones report of his ancestors, that included Annie’s name, so I knew her maiden name was Smith.

From a cousin who has been a mentor in my research, I had a transcription of information from a Smith family Bible. The Bible provided her parents’ and siblings’ names and the date of Annie’s birth. I also learned of the deaths of some of her siblings.

I had an informal family history that had been dug up by a remote cousin who in the nineties had written about the Butts of Danville, Knox County, Ohio that included details about Annie’s life.

So from the Bible and census reports I knew that Annie was born in Knox County, Ohio, in 1835, and that she stayed there.  From the informal history, I knew that she had been a devout Catholic. On Ancestry, I discovered her marriage certificate proving the date she married Henry Allen Butts. Census records also confirmed the names of siblings and their dates of birth.

Another bonus that doesn’t usually exist came in four letters from Henry Allen to his wife when he was in the Civil War, which gave a feel for their life that goes beyond the bare facts. For those letters I have my brother to thank. He talked to a relative in Ohio and found a man in California who owned copies of the letters. Although he would not part with the originals, the man allowed us to have copies.

Finally, I had made a personal visit to St. Luke Catholic Church in Danville, Ohio that Annie and Henry Allen attended. (I knew they attended there because of the family history and because Henry Allen is buried there, and I talked to a priest who showed me their register with the names of Butts family members.)

Who is Jean Baptiste Lamy?

Incidentally, I had recently read  “Death Comes to the Archbishop” by Willa Cather, together with a short bio of Jean Baptiste Lamy. I learned that before becoming Archbishop of New Mexico in 1850, he was an itinerant priest in Ohio, based in Cincinnati (in the southwest of Ohio).  Since Danville is in the northeastern central part of Ohio, it did not occur to me that he might have been anywhere near St. Lukes.

What Else Do I Want to Know?

After inventorying what I know, my next step is to start asking research questions.  Using the Who?What?When?Where?Why? and sometimes How? questions, I check to see if I have already discovered answers to some, and what questions remain.

I won’t go through all the questions I had about Annie and her life, but start with one of the research questions, “When?” . I recalled my visit to St. Luke’s church, and looking at the time period when Annie and her siblings were born, I realized that the church I saw probably was not there when Annie and her earlier siblings born in Ohio were christened. While I know that the Danville church has hand written records that go back to at least the early 1900s, I have not discovered their records on line. Since I already had satisfactory proof of Annie’s birth I did not plan a trip to Danville, nor did I write to the church, although I may some time in the future.

The church is a beautiful brick building, and much too sophisticated to have been built in the early 1800s.  So I looked for a church website to answer my “when” research questions. Fortunately St. Luke maintains a website that includes a history.  My objective was to find when the brick building was built, but as I read down through the chronology of events at St. Luke, I abruptly stopped with this entry:

The first resident pastor was appointed in September 1839. He was a young Frenchman Father John Baptist Lamy born October 11, 1814 in Lempdes, France and ordained in December 1838.

Was there more than one John/Jean Baptiste Lamy? Or was this the Archbishop written about by Willa Cather?  As I read more of the history, I learned that Danville’ Ohio’s Father Lamy was indeed the man eventually made Archbishop of the territory of New Mexico.

Father Lamy arrived as pastor to St. Luke in 1839.  Annie had been baptized in 1835, so the celebrant at that occasion would have been a visiting priest, because Lamy was the first appointed exclusively to Danville.  Although there may have been a wooden building constructed earlier for church services, no one is sure.  However, it is known that Lamy constructed a log cabin sanctuary at the graveyard–the graveyard that I visited just down a rural road from the church, which stands on the Main Street of Danville.

Father Lamy continued to serve the congregation at St. Luke until September 1847, and in 1850 went west to Santa Fe according to the church history on line.

Next I asked the research question, “What?”  What was happening during the period Father Lamy was there?

Four of Annie’s siblings were born during that period, and three died. Another baby was born in September 1847, so I don’t know if Father Lamy would have presided over her baptism.

UPDATE:  Look back at the story about Annie to see a new piece of evidence I collected that ties the Smith family to Father Lamy!

At any rate, from the timeline of the Smith family, and the timeline of Father Lamy’s service, I could clearly see that the family had extensive contact with him over eight years.

And by the way, the answer to my original questions, “When was the brick building of St. Luke built? ” proves that I was definitely right about it being much to new for Annie’s childhood–although she certainly attended it as an adult.  The first St. Luke brick church was dedicated in 1877. However, it stood near the original wood church by the cemetery rather than in the present location. Re-reading the history, I find that when Henry returned from the Civil War, and he and Annie eventually moved into town, various changes came to the church.

I do not have pictures here, because all of the good pictures of St. Luke that I have found are copyrighted. You can see several photos at the St. Luke website.

Annie’s father died in 1886, and her mother in 1892, so their funerals would have taken place in that church by the cemetery. (I have not checked to see if they or other family members are buried there, but it is a good guess.)

Henry and Annie would have been there in 1895 when the brick church near the graveyard burned and services resumed temporarily in the old wooden church built by Father Lamy. Congregants had to bring their own chairs, as there were no built-in pews.

In 1896, the present beautiful church was dedicated.  Members of the community had pitched in to help with the details of hauling materials, cementing the bricks, installing pews and windows.  I have no doubt that Henry Allen Butts, listed as a laborer on some census reports, would have been one of the laborers, and I can imagine Annie helping other women feed the laborers.

My great grandparents DID attend the church that I visited on Main Street in Danville, and mass would have been said for them when they died. But when she was young, great-grandmother Annie Smith knew Father Lamy as her priest.

So putting together Father/Archbishop Lamy and the life of my great-grandmother Annie Smith Butts, turned out to be less strenuous than much genealogical research. However, it did involve a source that might not have occurred to you in the past.  Look not just for histories of your family, but histories of the town, county, state in which they lived.  If they worked on or lived near a railroad, look for the history of railroads in the region.  Look at school yearbooks and school histories. And don’t forget to look for the history of the church they attended.

Now that I have learned the history of St. Luke, I can tie events in the lives of other Smith and Butts families to a particular building and a particular minister. All I have to do is remember to ask the right research questions.